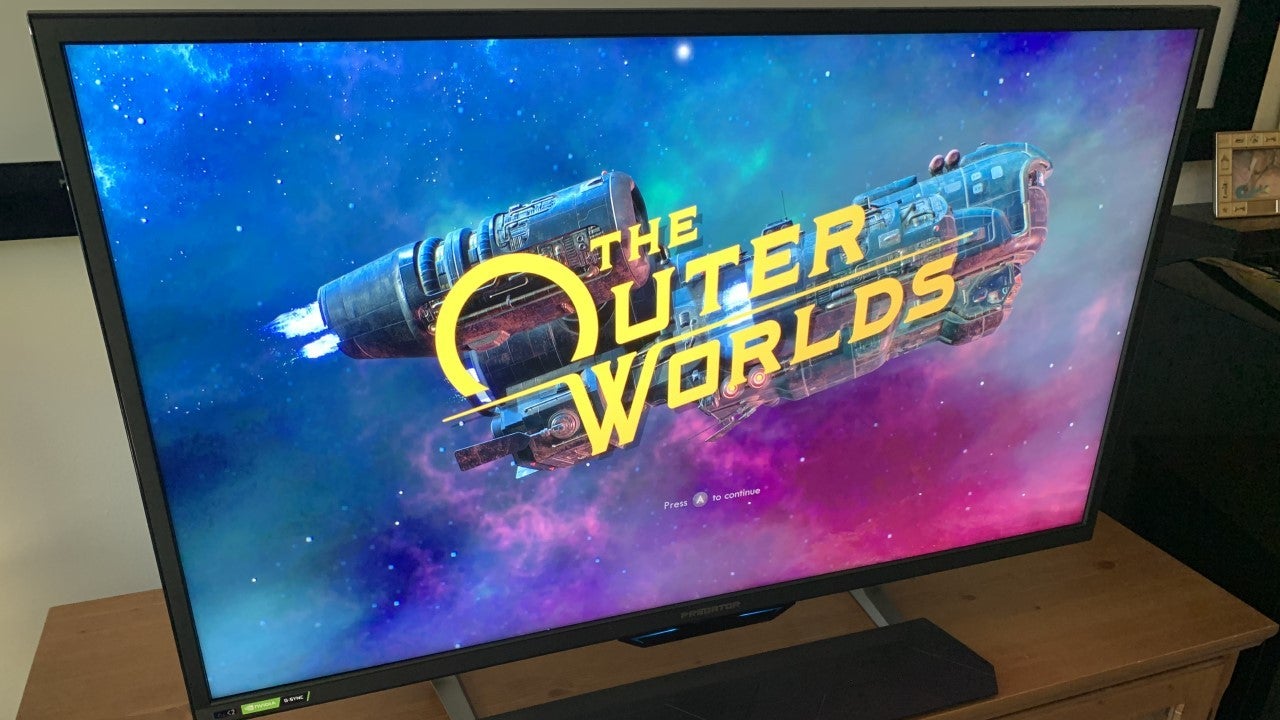 March 29, 2020 Off By tracy
There is always a push for the bleeding edge, and for gaming monitors that now means the combination of 4K, HDR, and high refresh rate in one display. Acer’s Predator CG437K is the latest display attempting to cram all that technology into a single package. It’s a 4K, DisplayHDR 1000-certified monitor, with an overdriven refresh rate of 144Hz. It also comes with a price-tag of $1,500. But is all of that bleeding-edge tech worthy of the price?

Up until now, if you wanted a 4K HDR 144Hz monitor you could either go with a reasonably-sized 27-inch model, or the aptly-named Big Format Gaming Display (BFGD) 65-inch HP Omen X. At 43-inches, the Acer Predator CG437K – tagged as a Large Format Gaming Display – fills the gap between the two options. For my taste it’s a bit too big for a desk based on my sitting distance, but the size is perfect for a smaller room.

There’s a shift here away from the styling we expect to see from a Predator-line monitor – usually accented with sharp angles and red. Now the only dash of color is the blue glow of the power light below the badge on the bottom bezel. An angular design is still present on the incredibly sturdy stand – an area that doubles as a place to rest your console controllers, which is a nice touch – but not as severe as in the past. Most of that design style is left to the back panel, so it won’t be on display.

If you want to add some flair to the monitor, the CG437 comes with four magnetic LED light strips. There’s only one, pretty significant, problem. The monitor case is plastic, so there’s nowhere to attach the LED strips without MacGyvering it with some double-sided tape, or finding something that is metal elsewhere on my desk to attach them. There are four headers on the back of the monitor to supply power, and different lighting configurations can be set in the monitor’s menu. The power leads are all five feet long, so placing the strips anywhere around your desk shouldn’t be an issue, but it also means if you attach them to the monitor you’ll need to bunch up a lot of slack.

There are a bunch of different connections on the back – a USB-C, three HDMI 2.0, two DisplayPort 1.4, and a USB hub with two USB 3.0 and two USB 2.0. Cable management is limited to one clip on the right leg of the stand, and the two side-facing HDMI and two USB 3.0 ports on the back are so close to the edge of the monitor, when an HDMI cable is plugged in it can peek out past the monitor’s edge. A streaming stick needs to be plugged into the down-facing HDMI to avoid being seen.

The Predator CG437K has a 4K HDR VA panel with adaptive sync and a refresh rate up to 144Hz with overclocking. In order to get the possibility of 144Hz, two DisplayPort cables must be connected to your video card (there are two that come in the box), the 4K-144Hz Mode must be turned on in the monitor menu, and 144Hz refresh must be selected in your video card software. This will also disable HDR and adaptive sync. Oh, and you’ll need two top of the line AMD video cards to even think about approaching playing a 4K game at 144Hz (only AMD cards are supported up to 144Hz). It takes an incredible amount of processing power to hit frame rates that high at 4K, especially if the game isn’t especially well optimized. But it does mean that when the prices come down and the technology continues to develop, the CG437K will be ready for it.

Local dimming allows displays to better control black level when there are bright parts to the screen. With more local dimming zones, a bright spot won’t bleed into black areas. Depending on screen size, many TVs can have upwards of 400 zones. Acer doesn’t publish the number of dimming zones on the CG437K, but it doesn’t seem to be that high of a number. This becomes most apparent when there’s a white image on the middle of the screen and the space above and below the image that should be black is a dark gray, while the right and left side of the screen is still black. Movie title cards make this effect very prominent.

Testing was done with a Photo Research PR-650 spectroradiometer, a Konica Minolta LS-100 luminance meter, and CalMAN 2018 calibration software. HDR patterns were from Diversified Video Solutions’ UltraHD/HDR-10 Test Pattern Suite. SDR patterns were from a VideoForge Classic generator. When testing, a numerical DeltaE value is used to indicate how close to perfect a measurement is. A DeltaE of 1.0 or below is considered perfect as any difference from reference is indistinguishable. 3.0 or lower is excellent and it is hard to see a discrepancy without scrutiny, while above that value any variations become more perceptible. Standard picture mode with warm color temperature was used for SDR testing and HDR mode was used for HDR testing.

The Predator CG437K is an incredibly grayscale and color accurate display in SDR. Its average grayscale accuracy measured a DeltaE value of only 1.667, with the highest value being 2.551. Any inaccuracies are completely imperceptible, especially with real content and not test images. The color points were almost as impressive, with the highest DeltaE value measuring only 2.545. And as advertised, the Predator CG437K has over 90% coverage of the DCI color space (91.4% to be exact).

The default 2.2 gamma setting is just a tad under, measuring closer to a 2.1 average, which is perfectly fine if your room has a good amount of ambient light. Because I used the display most often in a dark room while gaming and watching TV, I chose to change the setting to 2.4, which brought the measured average value to 2.3. It’s a small change, but it helped the grays look less washed out.

HDR measurement results were very good. Grayscale tracking was excellent with values staying under 2.0 consistently, and the EOTF curve (that tells the display how much light to output from 0-100% brightness) followed the target well. Interestingly, when I conducted similar measurements over DisplayPort there were issues with the EOTF curve. The CG437K low-end values (from 0-60% brightness) were all too high. This was apparent while using the display as a monitor to view HDR content, as games and videos looked washed out in darker images.

Another peculiarity was with the HDR Mode setting that can be toggled between Off, Auto, and HDR-1000. Auto was around 150 nits dimmer than the HDR-1000 setting. I would expect an auto setting to deliver the best image based on the signal, but in this case I used HDR-1000 almost exclusively. Highlights popped more, and the light output measured over 1,100 nits.

The greens of the forest looked particularly vibrant as I ran through Kashyyyk to meet up with Tarfful in Jedi: Fallen Order. Detail in the leaves was excellent and there was some depth to the shadow detail while creeping through caves. In some of the dark scenes, a glow from the edge lighting – primarily in the bottom right corner – was apparent.

Detail in Sea of Thieves was equally as impressive. The craters of the moon were easily visible as it moved through the sky, and it lit up beautifully as it caught the rays of the sun. The moonlight glistened on the wave crests and there was a good amount of variance to the water coloration, most notably when the waves were rough.

In The Last Jedi, the fabric of the robes Luke wears and the fibers of Rey’s tunic looked impeccable. The contrast of the white and red of the Crait salt flats was striking. As a home theater display, the Predator CG437K looks as good as any other VA panel television.