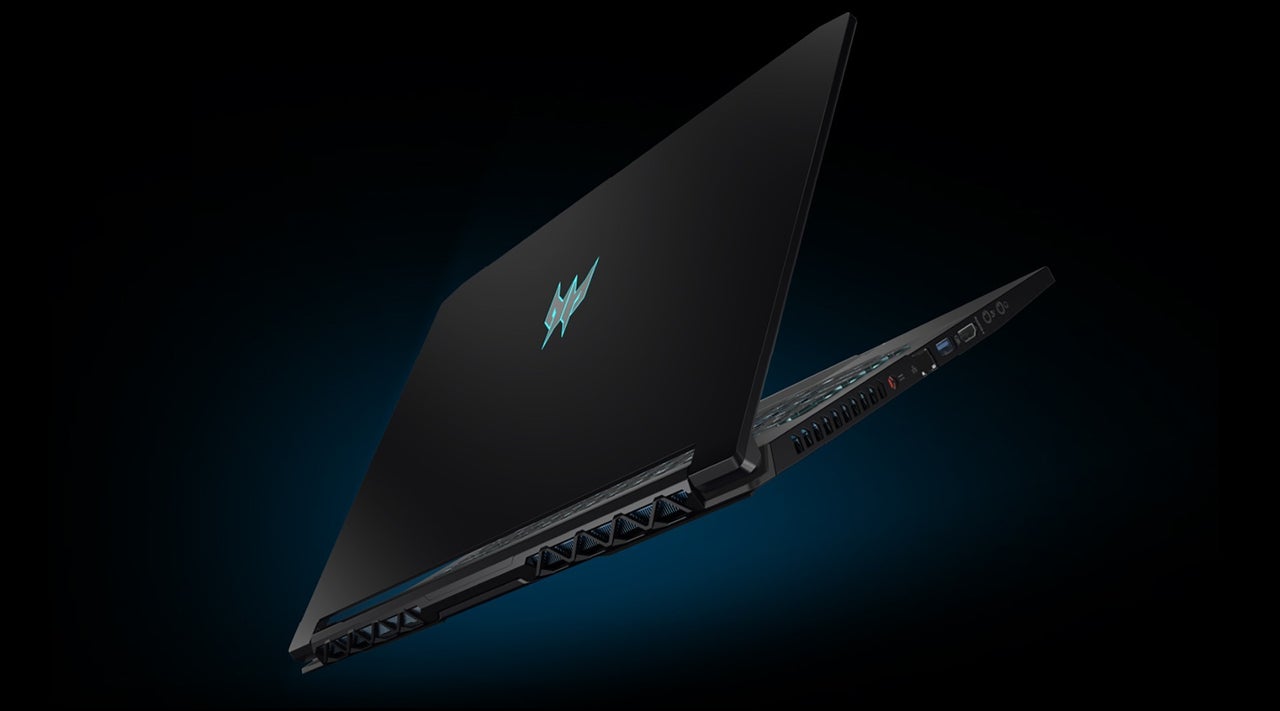 October 6, 2020 Off By tracy
The Acer Predator Triton 500 is everything I want in a gaming laptop. It checks all the boxes, and then it checks boxes in those boxes, like zooming in on a fractal of dope gaming laptop credentials.It’s “cool” but subtle enough for a coffee shop. It’s got significant horsepower but doesn’t bog it down with pointless software. It’s capable of on-the-go gaming (power supply recommended) but can power through nearly four hours of work on a single charge. Perhaps the most seductive feature of all is the display – a 15.6-inch IPS screen that’s capable of a 300hz refresh rate. That’s a display fluid enough to warrant a “silky smooth” cliche.

I usually hate the “gaming aesthetic.” It’s often carelessly done, lumping neons and shiny blacks as a catchall design sensibility. I would gladly trade RGB and neon plastic for clean lines and premium materials. But the Triton 500 is somehow able to walk that tightrope, meshing an almost timeless aesthetic with enough cool RGB bells and whistles to win over even a hater like me.The best part of the Triton’s design is doubtlessly its brushed aluminum chassis. It looks fantastic and feels sturdy and expensive. Closed, the Triton is impossibly thin – just shy of 18mm (not even three-quarters of an inch!). Along the chassis, you’ll find a deluge of ports. There are three USB type-A ports, one USB-C, an HDMI port, an E3100 Ethernet Controller, and even a MiniDisplay Port. Where there aren’t ports there are exhaust vents each tied to the Triton’s triple-fan cooling system.

That cooling system is called the 4th Gen Aeroblade 3D technology. It’s a fancy name, but gaming laptops get hot no matter how fancy their cooling system’s name. While playing the most part, they won’t stop your computer from getting hot (and loud). At peak performance, this laptop runs so hot, it can actually be uncomfortable, especially in the vent just above the keyboard. That being said, I rarely experienced any thermal throttling, thanks in part to the jet engine-like fans.

Speaking of loud, the Triton’s speakers are plenty loud, but you might not like what you hear at higher decibels. Audio quickly gets distorted at louder volumes and sounds a bit muddled at lower ones. PredatorSense has a multitude of options to adjust the audio for Movies, Shooters, Music, Voice, even Strategy whatever that means. But no matter what I tried, I couldn’t make the speakers sound clean at low or high volumes.

The metal of the chassis picks up its fair share of smudges and fingerprints, especially on the top cover, which can make the laptop look grimy, but I’d still take it over a shiny plastic in a heartbeat. It’s all fairly subtle, save for the sharp, illuminated Predator logo on the back, which is one of the only things you can’t customize.

That’s because, thanks to a suave software companion called “PredatorSense,” you can customize just about everything. You can control your fans, set audio profiles, change your boot logo, or customize your keyboard RGB lights on a per-key basis and save it to a profile. I had way more fun with this than expected, and I made an embarrassing number of profiles. One “Gaming” profile, I leaned into the kitschy aesthetic I usually detest. Every keystroke sent a ripple of bright green lights from my fingers in what can only be described as Matrix-esque fever dream. I also made one sexy coffee shop guy profile, where the keys remained white, save for a red delete key for good measure.

There are some comically bad options in there too. Settings that make the lights zoom distractingly from left to right and back again, or one reasonably innocuous option called “Breathing” that lights up your keyboard, then totally dims it. Or “Snake” which lights up keys like a game of, well, snake on your keyboard. One favorite is “Afterglow,” which briefly makes each struck key glow for a moment before dimming, giving each keystroke a subtle consequence.

If the Triton’s design is demure, its internals are anything but. You’ll find a 10th gen Intel Core i7 Mobile processor and GeForce RTX 2080 Super Max-Q under the keyboard. Its DDR4 RAM is configurable up to 32GB and up to 1TB of PCIe NVMe storage.

It’s a powerhouse, in other words. I never had any issue with any game even playing at the top of the line. When I felt the computer could utilize a little extra horsepower, I popped the Turbo button that sits above the F1 and F2 buttons. Doing so overclocks the CPU and delivers some serious extra juice. In fact, I ran every benchmark test twice – once with the Turbo button on and once off. It consistently delivered across-the-board performance improvements, including an extra 5+ frames per second.

Overclocking comes at a price, and that’s heat and battery life, the two areas where the Triton already struggles. If you’re ever planning on actually putting this laptop on your lap, you’ll need to be careful. While the top vents get hot to the touch, they’re nothing in comparison to the bottom of the computer where the intakes sit. After a 30 minute session of Metro Exodus, the system was 120 degrees Fahrenheit – and likely much warmer on the bottom.

To counteract that molten core, the Predator requires you to plug in to utilize the Turbo button, which solves two problems. One, it prevents people from using it in their laps and two, it leviates the battery concerns. Activating Turbo instantly kicks all the fans into overdrive. Those fans are loud. Loud enough to hear from the opposite end of my apartment. And they’re frankly loud enough to make me think long and hard about activating them for most games’ negligible performance boosts. But when a game finally tests the laptop, like Metro Exodus or Death Stranding, the choice is obvious.

Much of the keyboard seems designed to be quickly familiarized. There’s a significant spread between each key, which makes it easy to single out individual keys, and small ridges on the “F” and “J” keys help ensure your hands are in the right spot. The WASD, arrow keys, and special PredatorSense keys are outlined in a clear cap that makes them easy to hunt and peck when needed. As mentioned earlier, the customizable RGB lighting is a nice touch too. The keys can feel a bit mushy at times, especially when writing long documents like, say, a “Laptop Review.”

And then there’s the PredatorSense button, aka the bane of my existence. It sits lodged to the right of the backspace key, and while I tested this laptop, I accidentally triggered it no fewer than 25 times. Doing so doesn’t just bring up the PredatorSense window, it minimizes your current window. That goes from annoying to infuriating real quick, especially during gaming sessions where the game’s on the line – though mercifully, this is also when I’m much less likely to press “backspace.” Instead, it’s most likely to occur when you’re working, aka the last time you’d ever need to overclock your laptop. Unfortunately, I never found a way to disable the button, so I just had to live with the annoying interruptions.

On the flip side of the keyboard is one of the Triton’s hallmark features, an IPS FHD display capable of a 300hz refresh rate with G-Sync. It bears repeating: that is a shockingly fast refresh rate. It’s a display deserving of the cliche, “Silky Smooth” and easily one of the best gaming displays I’ve seen on a laptop. In action, everything looks so fluid you might just begin to resent other panels.

However, the sad truth is that the refresh rate is something you’re going to experience most often when you’re not gaming. Getting that kind of refresh rate while playing a graphically demanding game is just not going to happen. I was able to achieve more than 200 FPS playing games like Age of Empires: Definitive Edition and I got more than 144 FPS in Valorant, too. And the Triton 500 let me experience the glory of every one of those frames. But in anything graphically demanding, 300hz is a far cry from what’s achievable.

It bears repeating: that 300Hz is a shockingly fast refresh rate

And not to sound ungrateful, but I did occasionally feel a bit claustrophobic with the 1080p FHD display. Games that don’t depend on high refresh rates but benefit from larger fields of view – like certain real-time strategy games – had me longing for a UHD monitor. Unfortunately, the hit to battery life and stress on the GPU to achieve 4K would likely require Acer to rework the Triton 500 from the ground up.

Despite packing a decently large 5,400mAh battery, the Acer Predator Triton 500 has mediocre battery life. Our PCMark Modern Office test simulates desk job conditions – it pegged the battery around 3 hours and 58 minutes. My real-world testing had the battery drained much faster, in a measly 2 hours and 21 minutes. But suppose you’re just planning to work. In that case, there are myriad options for extending your battery life, including lowering the performance, turning off G-Sync, dropping the RGB, and reducing the display refresh rate to 60hz.

Unsurprisingly, gaming eviscerated the battery. It took just one hour and nine minutes to completely power down the device with middle of the road performance (things like the Turbo button are unavailable without being connected to power).

Despite the sub-par battery life, I’m okay with the compromise if it’s part of what contributes to the laptop’s thin form factor.