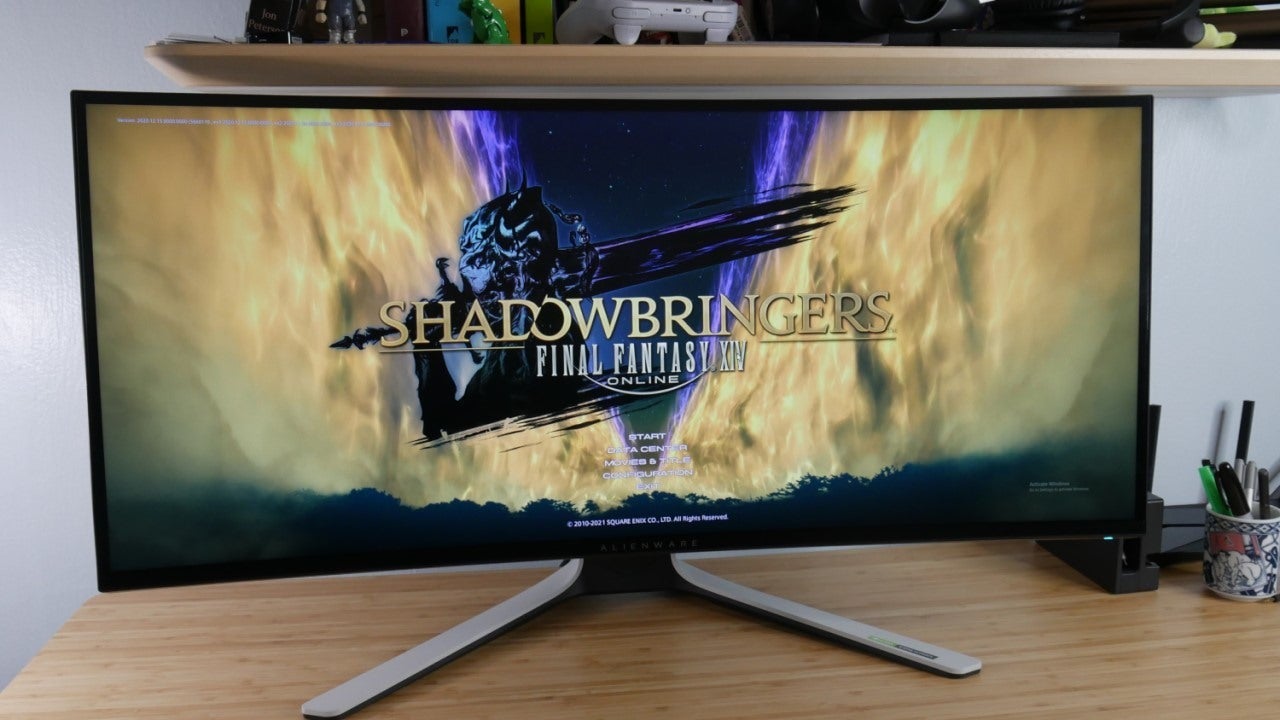 January 21, 2021 Off By tracy
Alienware is the Porsche of the gaming world. This is a backhanded compliment – the company’s desktops, laptops, and gaming monitors often look stunning and perform well, but they’re clearly not trying to compete on price.The new Alienware AW3821DW is no exception. Priced at $1,529.99, this 38-inch ultrawide commands a premium. In fact, this Alienware is more expensive than the larger Samsung Odyssey G9, which I recently reviewed.Its high price is partially justified by the AW3821DW’s collection of cutting-edge features, but what you’re really paying for is a luxury gaming experience – and Alienware delivers.

Most gaming monitors, truth be told, are design disasters. They make little effort to offer a unique look, and when they do, they’re often gaudy and feel inexpensive.

Alienware’s AW3821DW bucks this trend. I liked the look and feel of Samsung’s massive Odyssey G9, but the AW3821DW leaps ahead of even that impressive monitor. Alienware’s “Legend” design language puts everything else in the gaming market to shame. It’s attractive, unique, and futuristic, yet also subtle and elegant.

This Alienware is a hefty piece of kit. The gigantic monitor arm, which is used like a handle to remove the monitor from its packaging without so much as a fingerprint on the screen, feels cast from a single piece of iron. This helps the monitor make a good first impression. It’s substantial, sturdy, and grounded.

The stand, which adjusts for height, tilt, swivel, and a few degrees of pivot, is nearly as wide as the monitor. It leaves little room on your desk but, on the plus side, it keeps the monitor in place with minimal wobble. Adjusting the monitor is easy, requiring minimal force, but once set everything stays firm in whichever position you choose.

Like Samsung’s Odyssey G9, the Alienware AW3821DW has a stand that’s too deep for a conventional desk depth of 30 to 36 inches. The monitor is too close to the user. You’ll need to find a way to place the monitor further back, such as a corner desk, or a wall-mount.

Around back, the stand has an LED ring that can connect with Alienware’s AlienFX software. This feature will appeal most to brand loyalists who want a color coordinated setup, though you can also change the color manually through the monitor’s menu.

The Alienware AW3821DW comes with a three-year warranty and “Advanced Exchange Service,” which promises that a replacement, if needed, will be shipped the next business day. That’s a serious benefit. Alienware’s main competitors, LG and Samsung, only warranty gaming monitors for one year. Alienware’s better warranty will help you feel comfortable dropping HDTV money on a monitor.

Competitors simply don’t make monitors like this Alienware. Its outstanding build quality, great ergonomics, and wonderful design add up to a monitor that feels worth its price before you even turn it on.

Alienware’s AW3821DW is the very definition of a cutting-edge IPS monitor. It has a Nano IPS display panel, a resolution of 3,840 x 1,600, a 144Hz refresh rate, Nvidia G-Sync Ultimate certification, and conforms to the VESA DisplayHDR 600 standard.

Speakers are not included. This isn’t uncommon even in top-tier gaming monitors, but I still think basic speakers should be included for moments when you don’t want to bother with headphones.

While packed with features, the AW3821DW is light on manual display controls. The on-screen menu system, which is controlled by a joystick, at first appears to offer a slim selection of options. Gamers can choose between several preset modes, adjust brightness and contrast, change the response time, turn on the black equalizer feature, and adjust color for RGB hues only.

On closer inspection, RGBCMY color calibration is available, but only when using the customizable Game 1, Game 2, and Game 3 presets. Even then, the monitor doesn’t offer precision adjustments for gamma curve or color temperature.

The lack of customization is a real shame and speaks to my biggest beef with Dell’s current monitor line-up. The company seems convinced that gaming monitors and professional monitors should be entirely separate. Want class-leading image quality? You can have that with Dell’s Ultrasharp U3421WE – but that monitor doesn’t offer a high refresh rate or adaptive sync. Want gaming features? The Alienware AW3821DW delivers but ditches the U3421WE’s in-depth and intuitive customization. Dell needs to wise up. It’s 2021, and many people who want a monitor for content creation also want to game.

While this sheer size can challenge the space available on a desk, it does have benefits in day-to-day use. The Alienware AW3821DW is among the tallest monitors you can buy, coming in just a hair shorter than a 32-inch 16:9 monitor. That translates to a lot of usable display real estate when editing documents, photos, and video. You can easily place two, three, or even four windows side-by-side.

You can easily place two, three, or even four windows side-by-side.

This Alienware has a resolution of 3,840 x 1,600, which is typical for a display of its size, and works out to about 109 pixels per inch. That’s almost identical to the pixel density of a 27-inch 1440p monitor. You won’t be blown away by the Alienware’s sharpness, but you can expect a clear, crisp experience in everyday use.

Professionals hoping to use the Alienware AW3821DW for color critical work might be disappointed. In my testing, the display covered 100% of the sRGB gamut, 97% of DCI-P3, and 88% of AdobeRGB. So far, so good. However, the display delivered modest color accuracy, a gamma curve of 2.3, and a rather high color temperature of 7300K. To put this in perspective, the $220 Dell S2721HGF I recently reviewed had better out-of-the-box color accuracy, gamma, and color temperature.

The Alienware AW3821DW’s shortcomings in measured image quality don’t necessarily translate to poor performance in games. While color accuracy and gamma need to be reasonably accurate, games tend to rely more on contrast, sharpness, brightness, and vibrant (as opposed to accurate) color.

I’ll start with the monitor’s most brilliant feature: brightness. I measured a maximum sustained brightness of 527 nits, which is the highest of any monitor I’ve tested. This Alienware can get bright and stay bright. That’s great if you play vibrant, colorful games like Final Fantasy XIV and Civilization VI.

It also leads to decent HDR performance in bright scenes, where highlights are clear for a monitor. This is an area where monitors still significantly lag behind modern HDR televisions, but the AW3821DW is at least comparable to budget HDTVs.

What about contrast? The Alienware has a respectable maximum contrast ratio of 930:1. That’s fine for a monitor with an IPS panel, and high enough to provide a satisfactory experience if you game in a lit room. The monitor’s brightness contributes to a perceived contrast that’s better than the numbers suggest. I noticed this most in Diablo III, where darker levels looked crisp and clear, with good shadow detail.

This Alienware won’t impress you in games with many dark scenes, like Resident Evil 7, or if you plan to spend time watching Netflix. Its contrast ratio just isn’t good enough. Instead, it looks great with bright and colorful content that plays to the Alienware’s strengths.

The Alienware AW3821DW is one smooth monitor. It’s among a small handful of 38-inch, 144Hz monitors that can handle adaptive sync across its entire refresh rate range, and it’s the only Nvidia G-Sync Ultimate certified monitor of its size. Not even LG’s competing Ultragear 38GL950G-B supports G-Sync Ultimate. AMD fans do get the cold shoulder, though, as it doesn’t support FreeSync.

The upside to focusing on G-Sync is that we have an excellent implementation of adaptive sync here. Nvidia’s G-Sync Compatible program has made G-Sync available on many more displays and, in general, was a win for gamers. However, imperfect G-Sync support can cause problems. A little flicker there, a problem with G-Sync in windowed mode there.

These issues are so minor that they rarely matter, but the Alienware AW3821DW avoids these quirks entirely. It worked perfectly in every game, every time, in both fullscreen and windowed mode. That’s the experience you’d expect from a premium monitor sold at a high price, and that’s what Alienware delivers.

The Alienware also has outstanding motion clarity. At the default “Fast” setting, ghosting is kept to a minimum, fine details remain clear, and overshoot isn’t noticeable. This is class-leading performance. The “Super Fast” setting slightly bumps the already excellent motion clarity, but it does introduce overshoot in the form of bright trails behind fast-moving objects. There’s also an Extreme mode, but it causes extremely noticeable overshoot and isn’t worth using.

Best of all, the monitor does a great job of keeping motion clarity in check across a range of refresh rates. 144Hz looks amazing, but 60Hz isn’t bad, either. That’s good news given this monitor’s 3,840 x 1,600 resolution will force most gamers to accept a framerate south of the monitor’s maximum in demanding games.