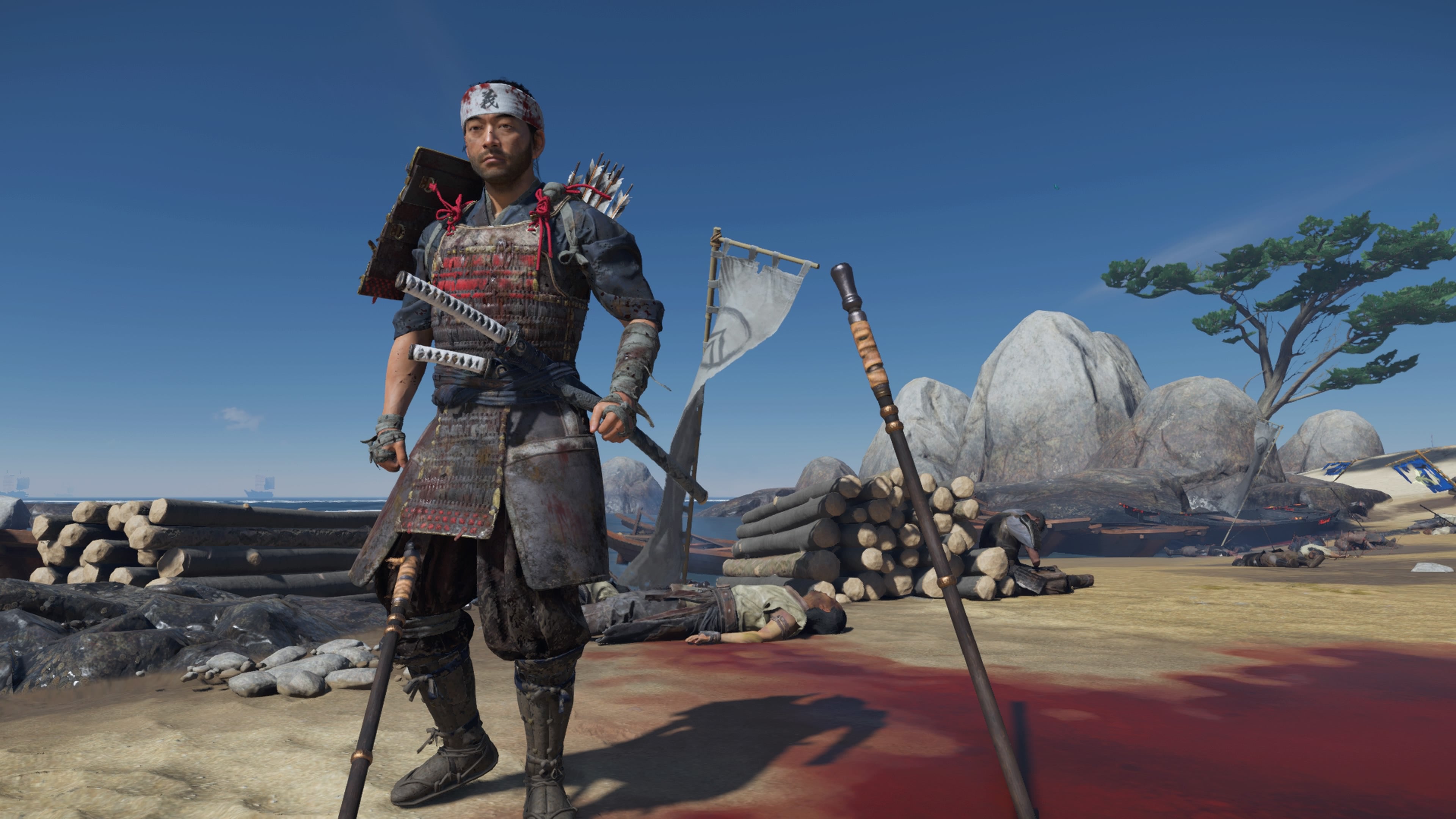 There are two unique merchants hiding in the island of Tsushima who have entirely unique armor and bow dyes from any other merchant you will encounter – and can be hard to track down.

The White Dye Merchant is located in upper Kashine prefecture of the Izuhara region, found along a mountain called Wanderer’s Pass on the map, north of Kashine Forest. Take the roads west along the peak to find his home nestled in the back.

The Black Dye Merchant is located in the northeast section of the Kushi Prefecture of the Toyotama region, in a cave up in the hills just east of Kawamata Village along a dirt road.

The Broken Armor is the default armor that you start the game with after and during the events of the Prologue. Unlike all other armor you can obtain, this armor provides no bonuses, cannot be upgraded, nor can it be dyed any other color.

It’s highly recommended you swap out of this armor as early as possible, either by taking on main quests or by getting the Traveler’s Attire.

The Traveler’s Attire is a special exploration-focused armor that you can find soon after completing the Prologue. Unlike other armor you find, the Traveler’s Attire is given as a gift by speaking to any Merchant in the game for the first time. This includes any Merchant found at any of the Survivor Camps, liberated mongol forts, or Hiyoshi Springs.

While it does not provide any combat bonuses, it does allow you to track certain collectibles you encounter, and can also track points of interest if you invest in Exploration Techniques. It’s base abilities include:

The Samurai Clan Armor is a melee combat-focused armor that you can obtain during Act 1‘s story. This armor cannot be missed as it is part of a main story quest, The Tale of Lady Masako. After exploring the Adachi estate and meeting with Lady Masako, she will send you into Golden Temple to talk to the armorer, where you will get the armor for free.

Once belonging to one of Lady Masako’s sons, the Samurai Clan Armor is a tried and true set of gear that is well suited to any combat situation, as it both increases health and decreases damage taken. It’s base abilities include:

The Ronin Attire is hybrid melee and stealth-focused armor that you can obtain during Act 1‘s story. This armor, like the Samurai Clan Armor, cannot be missed as it is given during one of the main story quests, Blood on the Grass. After meeting and fighting Mongols with Ryuzo, leader of the Straw Hat Ronin, follow him back to his base and open a chest to gain the armor.

Worn by those without masters, the Ronin Attire excels at offense and stealth, as it enhances your ability to sneak up on foes – especially in the white tall pampas grass, and dispatch those you are unable to assassinate with increased damage. It’s base abilities include:

The Tadayori’s Armor is a ranged-focused armor that you can find via an optional Mythic Tale in the Izuhara region starting in Act 1. After hearing about a musician at a unmarked camp near Rustling Bend, follow the clues in The Legend of Tadayori quest to reach the “Violet Crown” in the Azamo prefecture, and find the armor stashed on the cliffs above the Azamo Bay village.

The armor of a legendary archer, Tadayori’s Armor is perfect for ranged fighting, as it will bolster your ability to shoot more arrows at enemy at a much more rapid pace, and will enhance your Concentration technique. It’s base abilities include:

The Sakai Clan Armor is the ancestral armor of Jin’s lineage, last worn by his late father, and has now passed down to him. It is as intimidating as it is powerful, and can be found early on in Act 2, as long as you decide to take on the furthest of the main quests early.

The armor is very melee-focused, with the added bonus of allowing you to challenge more enemies to a face-off, and increasing your streak bonus even further when upgraded. It’s base abilities include:

The Gosaku’s Armor is a legendary samurai armor with impressive defense, but can only be unlocked after liberating six different farmsteads across both the Izuhara and Toyotama regions of Tsushima – which you will be alerted to after starting Act 2. After getting 6 keys from the villagers, you can return to a large peak to the east of the Old Togo Rice Fields to find the path up the cliff to get the armor.

Gosaku’s Armor is a very melee-focused armor, with a focus on destroying the defenses of enemies and staggering them to break their guards. It’s base abilities include:

The Kensei armor is a stealth and melee-focused armor that you can find in Act 2 in the Toyotama region, by completing a Mythic Tale that starts in the Umugi Prefecture. The quest will lead you on a chase across the region to face off against 5 assassins, culminating in a duel in a cave behind a monastery in the Kubara region to gain the armor.

The armor is very skill based, and increases your prowess with Ghost weaponry and resolve gain to make the most of your techniques. It’s base abilities include:

The Mongol Commander’s armor is perfect to become a human shield, increasing Jin’s health and reducing damage by a large amount. You can find the armor in Act 3 in the Jogaku region by completing Fit for the Khan. The quest will lead you on a chase across the region to liberate four mongol camps, retrieving one piece of the armor in each. Once you’re done, the armor (who was supposed to be delivered to the Khan himself) will be yours.

Along with increasing your health and defense, it will also serve as disguise when you are out of combat, reducing Mongol detection speed by a large margin.

As a caveat, the Mongol Commander’s armor cannot be upgraded.

The Ghost armor is a stealth and ghost skills focused armor that you can find in the end of Act 2 with the From The Darkness mission. Yes, this is the armor you’ve seen in Ghost of Tsushima’s official art, and it’s perfect for those who want to fight dishonorably, using the Ghost Stance as much as possible, staying in the shadows, and terrifying enemies.

This armor set is perfect for those who prefer to play quietly, causing fear on enemies and remaining undetected for longer.