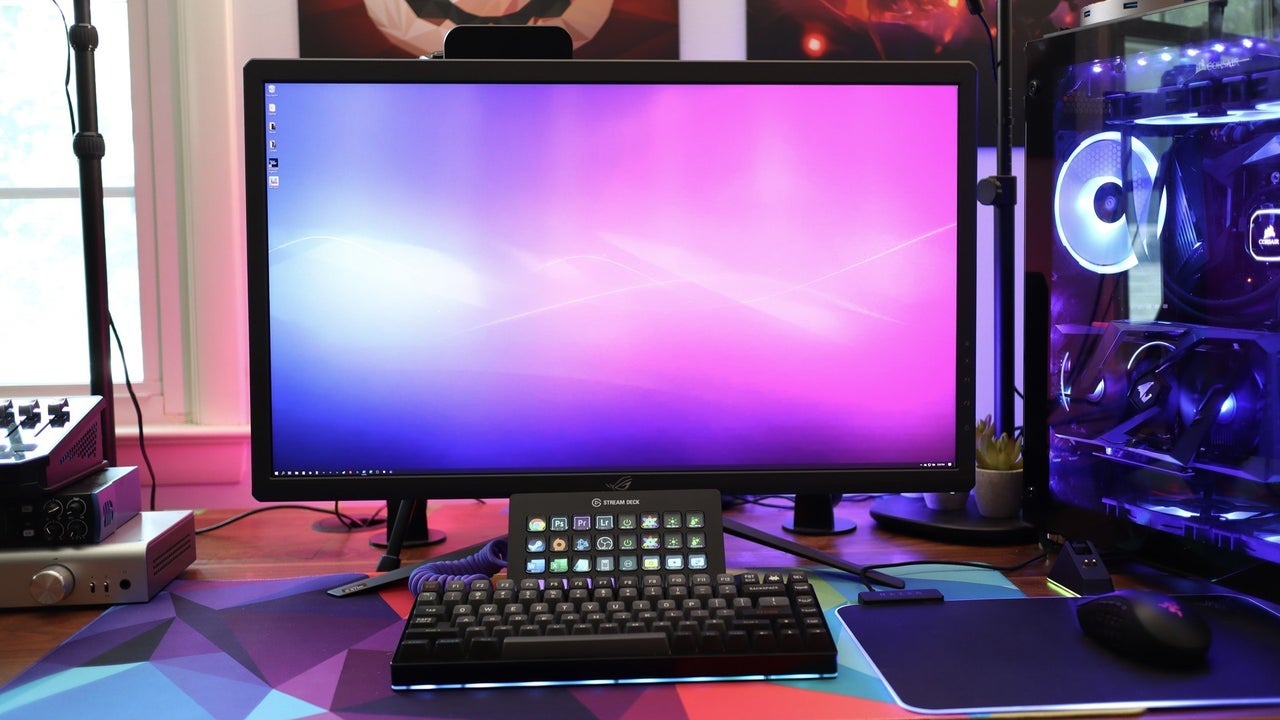 November 29, 2020 Off By tracy
4K gaming monitors with a 144Hz refresh rate are finally becoming more affordable, and with new graphics cards on the market (though stock is still scarce), the timing couldn’t be better. The Asus ROG Strix XG27UQ brings a lot to the table: high resolution, high frame rate, VESA DisplayHDR 400 certification, and excellent color coverage, but for $799, does it have enough to vanquish the competition?

The Strix XG27UQ checks just about every box a PC gamer could ask for. It’s 4K and can play games up to 144Hz. It’s built around an IPS panel for improved color accuracy, but also features a 1ms response time for high intensity games, fast enough for competitive esports. It supports HDR, has extra USB ports for connecting your gaming mouse and gaming keyboard, comes with a versatile and unique-looking stand that’s “gamer chic” in all the right ways, and has one of the coolest RGB logos to be found in a gaming monitor. At 27 inches, it’s also in the sweet spot for gaming monitors, allowing you to take in the whole scene without needing to turn your head, and at 4K resolution, has a high pixel density of 163 pixels per in (PPI).It’s also one of the few gaming monitors available today to support Digital Stream Compression, which increases the bandwidth a graphics card is able to send. In short, this means you can have your cake and eat it too: full 4K resolution, 144Hz, 10-bit color, and HDR all without decreasing image quality through chroma subsampling. The only caveat is that you’ll need a recent graphics card to run it, as DSC requires DisplayPort 1.4.The connectivity of the XG27UQ isn’t limited to DisplayPort, however. The rear panel features two each of DisplayPort 1.4 and HDMI 2.0, so you can easily connect a game console alongside your gaming PC (though without HDMI 2.1, you’ll be limited to 60hz if you’re playing on console). There’s no picture-in-picture mode, though, which disappointingly forces you to completely change inputs to see what’s happening on your other device.

There are also dual USB 3.0 ports, an upstream USB Type-B header to connect to the PC, a headphone jack (no speakers here), and a port for the external power brick. It could make for an unsightly mass of cables, but everything routes nicely through a cutout in the stand and is hidden by a removable shield on the back of the display to keep things looking clean.

It’s a nice feature, and with how slick the back of this display looks, it would be a tragedy to spoil it with a mass of wires. The XG27UQ is traced with cybernetic etching that looks like something from the deck of an alien battlecruiser. The ROG logo has a mirror finish that’s translucent enough to let the RGB shine through and looks wholly unique. The design is split by a diagonal slash that makes the etched half pop even more. Even the navigation joystick for the OSD, which works great, seems factored into the overall look.

The stand is also quite cool, with the same spiraled base we’ve seen on ROG monitors for several years, and the Light In Motion system that projects a red logo onto your desk. The lighting kit includes two ROG themed disks and a blank that you can write on with a marker to create your own logo. It’s neat in concept, but I found the bright red light distracting in practice, and wound up turning it off. More meaningful is the stand’s range of motion, which allows you to swivel the monitor and share the screen with a friend, pivot into a portrait orientation, and adjust the height within a five inch range. I was able to comfortably use the display sitting or standing without ever moving the base, which made changing position to stretch my legs easy.

Moving on to the screen itself, the XG27UQ uses an IPS panel. This display type is coveted by content creators due to its accurate colors, and that’s definitely the case here. Using my Datacolor SpyderX Elite, I was able to verify that the display covers 100%+ of the sRGB color space and 91% of DCI-P3, and also offered decent out-of-the-box calibration. If you’re a hobbyist creator, you can use it confidently without any adjustments, but following SpyderX’s calibration process, I was able to refine it to where color inaccuracies were imperceptible, even outperforming the Acer Predator X35 gaming monitor, which is triple the price. If you don’t have a calibration tool, the sRGB mode also does a good job of closing this gap, at the expense of color range.

The SpyderX includes a suite of other tests to assess a monitor’s performance. As you can tell from the report above, the XG27UQ did very well, with the only shortcomings being its white point (6800K vs 6500K) and luminance uniformity where the corners and edges proved to be about 10-12% less bright than the center. This result is reportable but is difficult to notice in normal use, especially while gaming due to the motion on the screen.

I also tested the display’s input lag using BlurBuster’s TestUFO Ghosting Test. This test easily reveals when input lag is a problem using fast motion animation and a high shutter speed camera. With the monitor’s overdrive settings disabled, ghost trails were visible with the naked eye. This was the case right up to the second highest level, where they disappeared almost entirely. Single ghosts were only visible on the darkest background, making this one of the best performing monitors I’ve ever tested, even over many VA and TN panels, while still being slightly behind the LG UltraGear 27GN950-B.

The LG is a prime competitor to the XG27UQ, offering very similar features and the exact same price. Unfortunately for Asus, it makes the Strix feel overpriced in comparison. The LG, for example, uses the company’s Nano IPS screen technology to offer more vivid colors, even when viewed at an angle – and it’s not just marketing fluff. Side by side, the LG offers a visibly richer picture.

Additionally, the UltraGear offers a better HDR experience thanks to its DisplayHDR 600 certification, offering a peak brightness of 600-nits and local dimming. The Strix, on the other hand, is only DisplayHDR 400 certified with a peak brightness of 400-nits and a global backlight. That superior brightness and contrast are a big improvement for HDR gaming. The Strix also has thick plastic bezels while the LG is almost frameless.

It does have an edge in customization and gaming features, however. On top of G-Sync and FreeSync compatibility, it features Asus’s Extreme Low Motion Blur (ELMB) technology that reduces motion blur when not using adaptive sync. There’s a built-in FPS meter which can bypass software restrictions and function in any game, and a tool to help you line up multiple displays with precision. There’s also the usual Shadow Boost/Black Equalizer and on-screen reticles for games that don’t include one.

Like most of the internet, I’m obsessed with the beauty of Microsoft Flight Simulator, so I couldn’t wait to dive in and experience the game in glorious 4K with G-Sync smoothness. I wasn’t disappointed. The level of detail was absolutely incredible. Flying over my home county, I was able to pick out details far into the distance. I may have crashed my plane from too much sightseeing…several times. When I finally swapped over to cockpit view, the level of detail I was able to make out in the instrument panel was simply stunning.

After my diversion in the skies of New York, I swapped to my go-to genre: first-person shooters. Beginning with Apex Legends. movement in the game felt incredibly smooth courtesy of G-Sync and the full 144Hz framerate. I played several matches, swapping between ELMB and G-Sync and while both were good, I definitely enjoyed the smoothness of G-Sync more than the slight reduction in motion blur.

Doom Eternal played expectedly fantastic with excellent fluidity of motion and a beautifully crisp picture, but the picture just wasn’t as rich or vivid as I experienced on the LG, especially in oranges and greens. Serendipitously, my first match in Battlefield V was a desert map composed almost entirely of these colors. Stepping to the side, I also noticed that the viewing angles, while better than a TN or VA gaming monitor, still fell slightly short of what I experienced with the LG.

The Asus ROG Strix XG27UQ is available for $799 from Amazon.