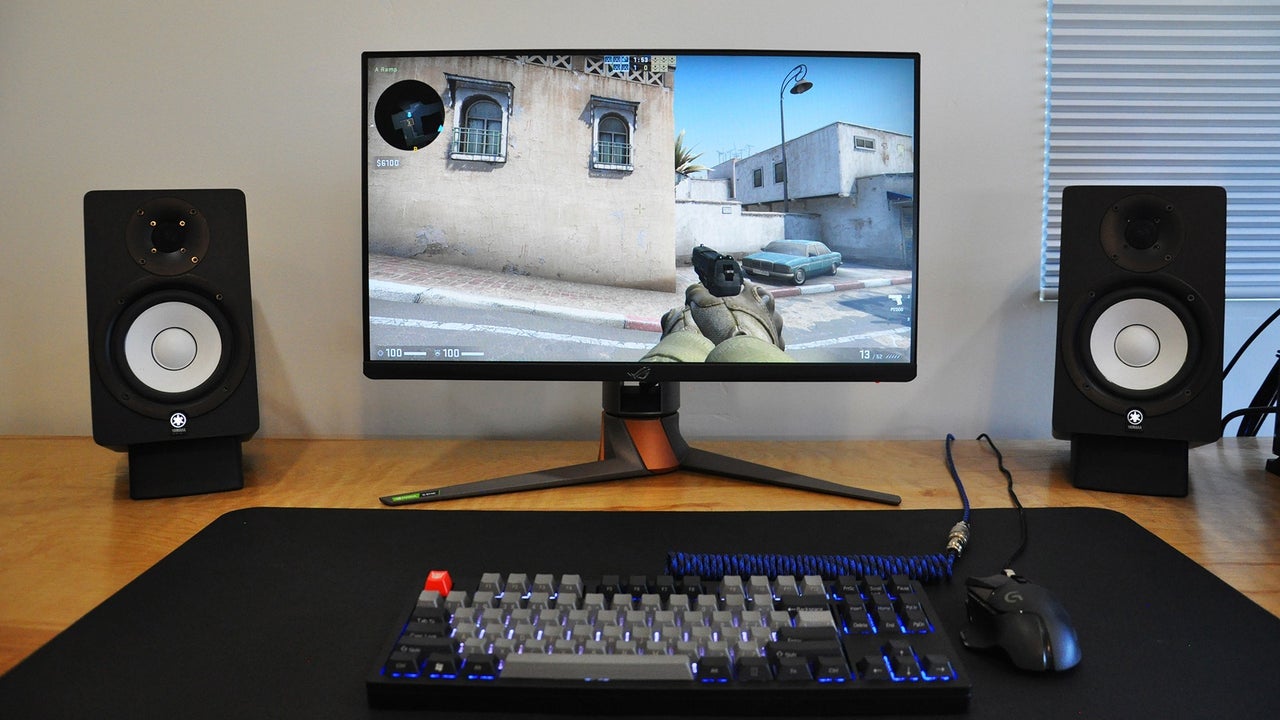 October 21, 2020 Off By tracy
It feels like 240Hz gaming monitors just came into being, but manufacturers are already cranking refresh rates higher. Asus’ ROG Swift PG259QN crams a ridiculous 360Hz refresh rate into an IPS panel for serious esports enthusiasts that refuse to make sacrifices. We ran it through some testing to see how it performed.

At $700, the PG259QN isn’t cheap, though its design isn’t quite as high-end feeling as some of Asus’ other ROG displays. It contains the same grey-and-copper swirled base, albeit without the extra embellishments and light-up logo found on the company’s top-tier monitors. It’s distinctly a gaming monitor, though, and the backside contains an etched circuit board pattern alongside a large ROG logo that reflects customizable, Aura Sync-compatible RGB lighting off your wall. The stand contains a built-in cable management hole, and is height, swivel, and tilt adjustable, which means you can get it set up just right for ideal ergonomics.

The frameless, 24.5-inch panel is small by today’s standards, but typical for the esports crowd it’s aiming for. The smaller monitor makes it easier to see everything on screen without darting your eyes around, and the lower resolution ensures your graphics card can pump out as many frames as possible – a must if you’re aiming for 360Hz. Unlike many other esports panels, though, the PG259QN is an IPS display, which means it provides much better color accuracy and viewing angles than its TN brethren, while still keeping a quick response time. (Asus claims 1ms, but these values can be fudged in so many ways they’re mostly meaningless – we’ll talk more about the response time in the testing section below).G-Sync allows you to play games without any screen tearing, which is always welcome, and the 395 nit brightness is very close to Asus’ quoted 400 nits. The monitor is also advertised as HDR10-capable, though with 400 nits of brightness, no wide color gamut, and no local dimming, it’s not really what anyone would consider HDR – that basically means it’s capable of receiving an HDR signal. IO is decent but not extraordinary, with one HDMI 2.0 port and one DisplayPort 1.4 port, alongside a 3.5mm speaker or headphone jack and two USB 3.0 ports.

To test a monitor’s performance, I run it through a DisplayCal verification using an X-Rite i1Display Pro, and a few by-eye tests with Lagom’s LCD test patterns. The PG259QN covers 95.4% of the sRGB color space and 68.0% of the DCI-P3 color space – not really enough to consider it a wide gamut monitor, but more than good enough for your typical web browsing and esports gaming. It also means that, unlike wide gamut monitors with their often over-saturated colors, the PG259QN is actually very color-accurate in its default state, despite not looking as vibrant as its wide gamut competition.

During measurement, a deltaE value determines how far off a color appears from its target – almost every deltaE value came in under 1, with only a few slightly over. That’s considered imperceptible, and it’s pretty shocking to see something this accurate from the factory. Only the target white point received a more noticeable deltaE value of 3.73, but that’s still unlikely to make a difference to most people.

The PG259QN is actually very color-accurate in its default state

The monitor’s sRGB mode had a slightly more accurate white point at 3.22 if you’re doing color-sensitive work, but otherwise is less customizable than other modes, so you probably wouldn’t want to use it for gaming. In its default Racing mode, the contrast ratio measured 1076:1, which is about what I’d hope for from an IPS display – blacks won’t be as deep as its VA brethren, but a worthy sacrifice for IPS’ better colors and response time.

Speaking of black levels, I found the darkest two squares in Lagom’s black saturation test pattern were just barely indistinguishable from reference black, as it should be. Hardcore gamers may want to turn Asus’ Dark Boost mode up to reveal that shadow detail a little more, though, lest hiding enemies get the better of you. White saturation was on point as well, there was no visible banding in gradients, and the IPS panel provided solid viewing angles all the way around.

Most impressive, though, was the response time. Lagom’s response time test produces a number of squares that quickly flip between two shades – the longer that transition takes, the more flickering you’ll see in those squares, which means you’re likely to experience ghosting in games. On super-fast panels like this, it also means the transitions may take too long to keep up with that 360Hz refresh rate, and you’re not getting a true 360Hz experience. Thankfully, the PG259QN has a stellar response time, producing almost no flickering in any of the squares on the default overdrive mode and barely any ghosting to speak of in Blur Busters’ UFO Test.

The monitor has three overdrive modes: Off, Normal, and Extreme. Off produces just a bit of motion blur, while the default Normal mode produces just a bit of overshoot, and Extreme produces more noticeable overshoot artifacts that I’d recommend avoiding. For the best experience, I recommend Normal, as I find its artifacts are barely noticeable and it contains barely any motion blur. You can turn on the Ultra Low Motion Blur (ULMB) backlight strobing feature to make motion even clearer, but it only works at 144hz and 240Hz with G-Sync off.

The PG259QN provides the same FPS, RTS, Cinema, and other modes you see on other displays, along with a crosshair and variable backlight modes. I recommend avoiding most of these and sticking with the default Racing mode, or – better yet – try the G-Sync Esports Mode. This disables variable backlight, cranks up Dark Boost, and turns down the gamma for what Nvidia says are the ideal settings for esports games. For some reason, it’s also the most customizable mode, allowing you to fine-tune the colors to your liking, so even if you prefer things like Dark Boost off, the G-Sync Esports Mode is probably the one to go with since you can tweak those settings back to their more accurate levels.

I’ve reviewed a few high-refresh displays over the past year, but I’m still wowed by the smooth, virtually blur-free motion that a good display can provide. The PG259QN may not be large or high-res, and it definitely feels cramped on the desktop, but that’s not really what you’re buying this monitor for. You’re buying it for fast-paced gaming, which – for lack of a better metaphor – is smoother than sledding down a hill with a greased-up toboggan.

The absurdly fast refresh rate made for extremely clear motion in games like Overwatch, and – while I couldn’t always get it up to 360 frames per second – non-esports games like Doom Eternal. That super-fast response time is downright dreamy even when you aren’t hitting the maximum refresh rate, and it gives you a feeling of control over your character that’s hard to match on slower, blurrier displays.The real question, though, is whether 360Hz actually makes a big enough difference to be worth the increase in price over a similar 240Hz monitor. Switching back and forth between both, I was skeptical I’d be able to tell the difference if I didn’t have that FPS counter in the corner, so I enlisted my wife for a little ABX testing: she’d switch Overwatch’s settings between 240Hz and 360Hz at random, then I’d move the mouse around and guess which refresh rate I thought she’d selected.

We did 12 trials, and if I’m being honest, I felt like I was guessing, but I got every trial correct except for one. That’s a statistically significant result, meaning the difference between 240Hz and 360Hz is, in fact, noticeable – but my lack of confidence in my own answers is enough to suggest that it’s extremely subtle. Many gamers probably won’t notice, and those who do will still find it an incredibly minor improvement.

It’s also pretty tough to get things running that smoothly, even in esports games. You’ll need a near-top-end graphics card to push out enough frames to make 360Hz worthwhile at 1080p. My overclocked Ryzen 2600 and Nvidia 2060 Super were able to hit 360 frames per second in the Overwatch practice range on the lowest graphical settings, but once you introduce other players into the mix, I found I stayed closer to 240 frames per second. Easier-to-run games like CS:GO were easier to get in the 300s – and for non-esports games, you can forget about getting framerates that high on most cards, even at 1080p with low settings. So make sure you have hardware with enough power (or factor new hardware into your budget) before you buy a monitor this fast.

The Asus ROG Swift PG259QN is available for $699 from online retailers like Amazon, Newegg, and Best Buy.