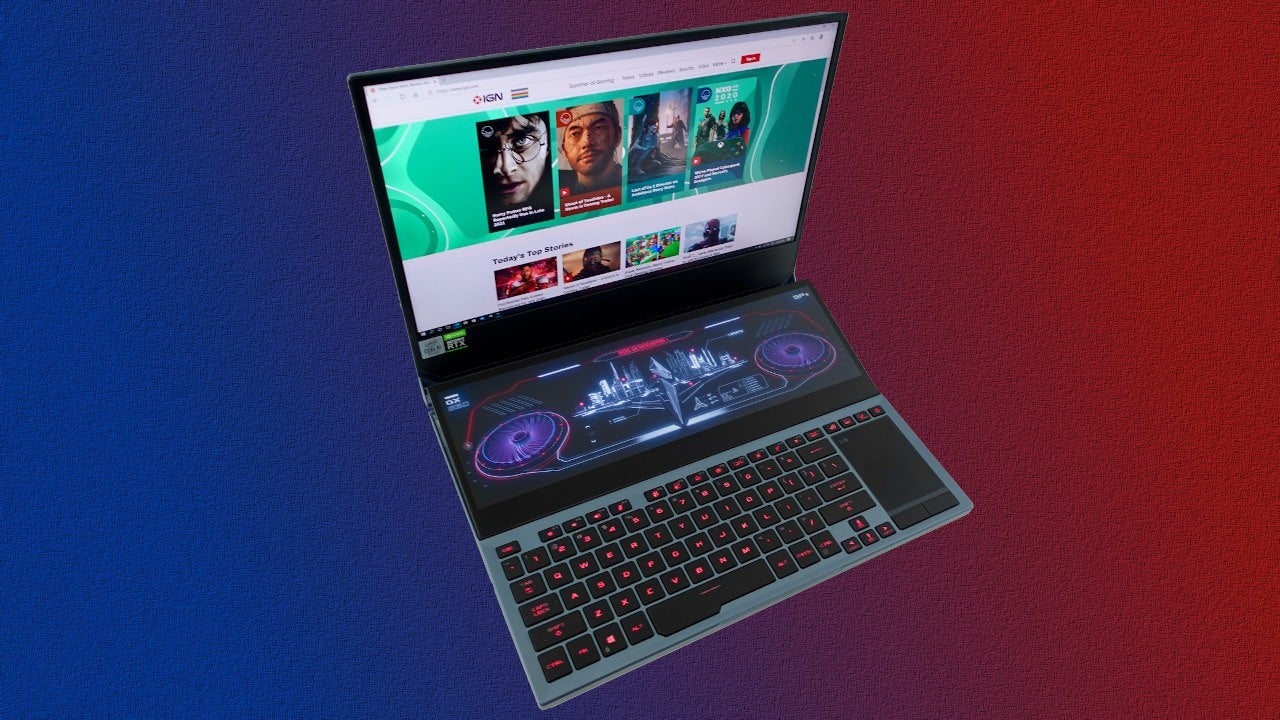 July 13, 2020 Off By tracy
Designing and producing a gaming laptop has to be tough. There’s only so much you can do to differentiate the design, features and components from the competition. Recently we saw Asus put an LED matrix of lights in the lid of the ROG Zephyrus G14, giving the laptop a completely unique feature. Now, the company is trying to distance itself even further from the competition by adding a second screen on the base of the ROG Zephyrus Duo 15. Yes, it looks as wild and cool as it sounds.


The added panel comes with a hefty price tag, though. The ROG Zephyrus Duo 15 we tested comes in at $3,699. There are a few different build options, but whatever Duo 15 you end up with is going to cost you.

Here are the specifications of the Asus ROG Zephyrus Duo 15 I’ve been testing:

Before I dive deeper into the added display, let’s talk about the overall design. Without the second screen, the Duo 15 looks like most other gaming laptops. It has a gray exterior, with the ROG logo on the lid. It’s not a giant laptop, by any means, measuring 14.2 x 10.6 x 0.8-inches and weighing 5.5-pounds. It’s not a portable machine, of course, but you’ll have no issues lugging it around your home or office, and occasionally tossing it in your bag to take over to a friends house for a gaming session.

There are ports on three sides – a design feature I absolutely love. Being able to plug things like power, Ethernet or HDMI into the back of a laptop and out of sight provides a clean look on my desk. On the rear here, you’ll find I/O ports for Ethernet, USB 3.2 Gen 2 and HDMI 2.0b. On the left side is where the two audio jacks live, one for mic in and another for audio out, along with the charging adapter. On the right side is a USB-C 3.2 Gen 2 Thunderbolt 3 port, and two USB 3.2 Gen 1 ports.

The chiclet keyboard has 1.4mm of travel, with bright RGB lighting behind each key. There isn’t a ten-key number pad. Instead, in its place, you’ll find a trackpad with two physical left and right-click buttons.

Above the row for number keys and trackpad are function keys you can use for tasks like adjusting the volume and display brightness. There’s also a shortcut key to launch Asus Armory Crate and another to turn the additional screen on and off just above the touchpad.

As I said, it’s a pretty normal gaming build except for, well, that second display. Let’s take a closer look.

The additional screen, which Asus affectionately calls ScreenPad Plus, measures 14-inches and has a resolution of 3840×1100. When you open the lid of the laptop, the screen lifts to a 13-degree viewing angle. The angle is more than steep enough to view whatever’s on the touch-capable panel without having to worry about glare or readability if you’re sitting up and over it. At arm’s length, however, it’s not quite steep enough for me to read it without leaning in.

The justification for the second screen? Asus envisions users placing toolbars and additional apps on ScreenPad Plus, giving them full use of the main display while adding functionality through the narrower touchscreen just below it.

For example, you can use the ScreenPad Plus display to put your editing toolbars while using Photoshop. Or if you stream and use Xsplit, you can have your broadcast controls and video feed below the main display.

All of this sounds useful, and certainly, it is, but it also feels like it’s very niche. In my nearly two weeks of testing and use, I eventually found a use for the ScreenPad Plus – opening the Armory Crate app to monitor system stats while I game, but even then, I can get most of those same stats as on-screen overlays through various apps and services.

I also tried using it to display folders and other miscellaneous windows while I performed more mundane and routine tasks, and it worked just fine, with the added benefit of working as a touchscreen. I could reach up from the keyboard and tap a button without having to move my mouse pointer all over the place.

I admit there are some who will find it an invaluable tool, and I see the potential benefit of ScreenPad Plus, I’m just not sold that it’s worth the added cost.

Performance and storage space need not be a worry when using the Duo 15, and the benchmarks back it up. Here’s our comparison spreadsheet, putting the Duo 15 up against the Predator Triton 900 and MSI GS65 Stealth.

The Duo 15 matches or beats nearly every test, despite the Triton 900 boasting non-Max-Q tuned (though also non-Super) RTX 2080. And that performance carries over to real-world use, from doing routine and mundane tasks like checking email or scrolling through a spreadsheet, or gaming.

Speaking of gaming, I played a lot of Call of Duty: Modern Warfare’s Warzone battle royale mode during my testing and I can confirm, dear reader, this is one fast gaming rig. When adjusting the resolution down to 1080p, the Duo 15 averaged 152 fps according to Xbox Game Bar. That’s with ray tracing turned on and at high settings. Upping the resolution to full 4K, frame rates took the expected hit but still stayed at a very respectable and playable 65 FPS. You’ll have to make the call about which resolution and frame rate you’re happy with.

I also spent some time in Battlefield V, a game where I can truly tell the difference when ray tracing is enabled, and at Ultra settings, I saw an average frame rate of 117 at 1080p.

The fans aren’t terribly loud, perhaps because the ScreenPad Plus acts as a sound barrier. The fans are hidden under the screen, and have protective screens on them so you don’t have to worry about grabbing the laptop and putting your thumb into the fan when carrying it across the room. The speakers were loud enough that I felt comfortable playing without headphones when they were running at full tilt.

In Turbo mode, the GPU basically stayed at 86-degrees during any gaming session. Lowering the power mode to Performance slightly dropped frame rates, along with the GPU temp.

The keyboard keys are a little soft, but after a couple of days of use, I was typing and tapping my way across it without issue. The touchpad is present, but let’s be honest, you’re going to have a gaming mouse attached to the Duo 15 most of the time. That said, the touchpad can get the job done in a pinch. Just don’t expect to drag and drop a folder from one screen to another without running into the edge of the pad.

The 2TB SSD is more than enough space for all of my games and benchmark programs, with plenty of space to spare. It’s kind of wild, just a year ago, I could say the same thing about a 1TB main storage drive. But even that’s pushing it now.

Using IGN’s battery life benchmark test, where we play a video on repeat with the display brightness set to 50% and turn off extraneous features like keyboard backlighting, Bluetooth and location, the Duo 15’s battery lasted 142 minutes or 2 hours and 22 minutes.

That’s right in line with other gaming laptops I’ve tested, and just enough to watch a movie, but that’s about it.

Thankfully you can use a portable battery pack and the USB-C port to keep the battery going while you’re mobile.

If you spend nearly $3,700 on a gaming laptop, you have a reasonable expectation for it to come with Windows 10, and maybe an extra app or two from the OEM that helps tweak performance. And with the Duo 15 you get all of that, but you also get the added bloatware of McAfee LiveSafe. How or why is this still a thing?

Not only is it annoying, but it’s an inconvenience. McAfee routinely displays passive-aggressive popups or reminders, letting you know you’re about to be at risk because your free trial only has so many days left. It’s a scare tactic, and it’s not okay.

In fact, a McAfee popup occurred during the first run of IGN’s battery benchmark test, forcing VLC to stop playing the video and a redo of the test.

Outside of that, the preinstalled software is more or less a standard affair as far as Asus gaming laptops go. Armory Crate is present, letting you fine-tune and tweak your system’s power settings, with various performance modes. I used Turbo mode for all gaming and benchmarking, but you can also pick from Performance, Silent and Windows.

Another useful piece of software installed on the Duo 15 is called Screen Xpert. It’s primary purpose is to aid in managing both screens, with the option to create app and folder shortcuts on the touchscreen (there’s an arrow on the far-left side of the screen you can tap to open it). Likewise, when you move a window around in the main display, a small pop up gives you the option to move or pin that window to the ScreenPad Plus, or force the window to go full screen across both screens.

For apps like mail or file explorer, full-screen mode is handy. But for games, well, it’s awkward and not very useful. Here’s how it looked when I tried to play Warzone using both screens.

See what I mean about feeling very… niche? It would have been awesome for this to work.