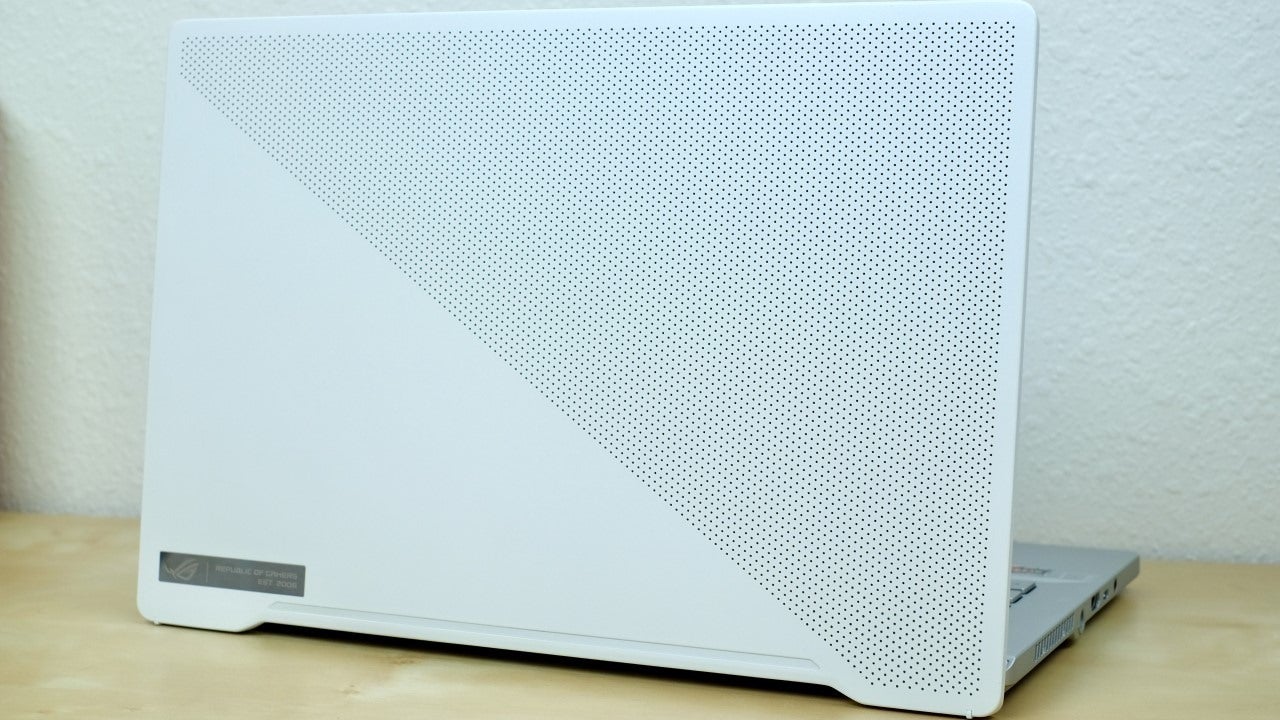 March 31, 2020 Off By tracy
In January, we got our first glimpse at the Asus ROG Zephyrus G14 during CES. The G14 combines AMD’s 4th generation Ryzen 9 4900 HS processor, and an Nvidia RTX 2060 GPU in an ultra-portable gaming laptop design that would make your MacBook Pro toting friends jealous.After taking a look at the Razer Blade Stealth 13 earlier this year, I was hoping we’d begin to see PC makers match its portability and, hopefully, exceed its power. Fast forward just a few short weeks later, and Asus has nearly delivered just that.

The G14 has its share of quirks, but for $1,449, you get a laptop that’s powerful enough to run games like Fortnite or Call Of Duty: Warzone on epic or high settings and stay above 60 fps with ease. And yet, it’s only 3.5-pounds and 0.7-inches thin.

Here are the specifications of the $1,449 Asus ROG Zephyrus G14 I’ve been testing:

I so badly wanted to review the G14 variant that has a 1,215 LED array on the lid, which can be used to display text or images, but alas I was sent an LED AniMe Matrix-free model. The lid has the same dot layout, nonetheless, and it’s a unique look that I found a welcome break from its competition. If you want the LED AniMe Matrix, you’re looking at $1,999 for an equipped setup.

The G14 isn’t quite as small as the Razer Blade Stealth 13, but it’s close. Measuring 12.77 x 8.66 x 0.70 inches and weighing just 3.52 pounds, it’s still one of the most portable gaming laptops I’ve tested. In comparison, the Blade Stealth 13 is 11.99 x 8.27 x 0.6-inches and weighs 3.13 pounds. Both laptops go against everything I’ve ever known gaming laptops to be: Big, bulky, heavy and not something I’d want to put in a backpack and carry around. And I’m not complaining one bit.

There are a total of six ports on the G14. On the right side, from front to back, is a USB Type C port and two USB 3.2 Gen 2 ports. On the opposite side is a 3.5mm headphone jack, a USB Type C port with Power Delivery and DisplayPort 1.4 support, followed by an HDMI 2.0b port. The power port sits just behind the HDMI port, roughly in the middle on the left side of the housing.

The USB-C port with Power Delivery can be used to charge or power the G14 at up to 65W for typical computer work, but not gaming. You’ll need to use the included 180W power adapter to use the discrete GPU.

The 14-inch HD display is surrounded by fairly thin bezels, even along the top where a webcam normally would be found. Asus is giving users the option of a webcam, and the review unit I was sent lacks one. I honestly didn’t even notice it was missing until a few days into testing, but if you rely on a webcam, either be sure to opt for the model with it built in or be prepared to use an external unit.

The G14’s chiclet keyboard doesn’t remind me of what I’d find on a gaming laptop, instead, it feels and behaves more like a standard keyboard on something like the Asus ZenBook. That’s not to say it’s a bad keyboard with a bad overall experience. But, for me at least, it’s the type of keyboard I’m more comfortable typing on than gaming on.

Above the keyboard and on the left side of the housing are dedicated keys for volume and mic control, a shortcut key to launch the Asus Armoury Crate program. Towards the right edge is a power button with an integrated fingerprint reader. I set up the fingerprint scanner with ease, and since then I’ve been able to consistently and reliably unlock the G14 just by opening the lid and quickly placing my finger on the button.

A trackpad is centered with the laptop housing, just below the keyboard. It’s smooth and comfortable to use, but a little on the small side.

Perhaps the most interesting aspect of the G14’s design (outside of the LED lid) is the hinge. As the lid opens, the bottom of it lifts the base of the G14 off your table or desk, putting the keyboard at a more ergonomic angle and improving airflow for the vents on the bottom of the laptop.

Asus and AMD worked together to come up with a 35W configuration of the 4900 for the G14, instead of 45W. You can remove the bottom of the G14 and install more RAM on your own. Half of the memory in the review unit is on board, with a single SO-DIMM slot for additional RAM. For comparison, the Stealth 13 has fixed memory and isn’t upgradeable.

I put the benchmark results of the G15 up against the RTX 2060 equipped Razer Blade 15 and the just-as-portable Razer Blade Stealth 13. The latter comparison is simply to show the performance gains the G14’s RTX 2060 with Max-Q gives you over the GTX 1650. And, well, take a look.

As expected, the G14 outperforms the Stealth 13 across the board and keeps pace with the RTX 2060 in the Blade 15 from last year. The impressive benchmark results get even more impressive with real-world use.

I spent the majority of my testing time playing Call of Duty: Warzone, which has DirectX Raytracing. With nearly all graphics settings put on High and DirectX Raytracing turned on, I consistently experienced between 90 and 110 fps. I was able to boost performance up the higher end of that span, hovering around 110 fps, by turning it off and turning some graphics settings down. Using Epic settings across the board in Fortnite, the G14 kept between 70 and 80 fps without any hiccups.

Unlike the Stealth 13, where hitting 60 fps at 1080p was achievable, but only after you tweaked settings and accepted less than ultra or max settings, the G14 delivers more than 60 fps with whatever settings you want.

The obvious downside here is that its performance isn’t quite enough to take advantage of the 120Hz display, which is unfortunate.

There’s another downside: The fans are loud. Loud enough that I actually put on my gaming headset – something I shy away from when testing gaming laptops – after a couple of gaming sessions. The speakers aren’t especially great either – I was able to hear nearby gunshots, but there was no sense of direction or distance, and no chance of hearing nearby footsteps as someone got closer to me.

Asus estimates the battery life of the G14 to be 10 hours, but as usually is the case with manufacturer estimates, our test results fell short of that.

After completing IGN’s movie rundown test, which consists of setting the screen brightness to 50-percent, turning off all unnecessary connectivity features, the G14 lasted 318 minutes. That’s the second-best battery result out of the dozens of gaming laptops I’ve tested for IGN, coming in second to the Razer Blade 15 with a GTX 1070 that powered through 363 minutes in the same test. Yeah. Impressive.

Asus preinstalled a few applications on the G14, and thankfully none of them are virus scanners. Installed are the Asus Armoury Crate gaming software for tuning and customizing performance, Gamefirst VI for monitoring and adjusting network performance, and the MyAsus app.

The first two apps are standard for any gaming laptop, with features like creating gaming profiles for boost performance and view live system stats in Armoury Crate. It’s also the app you’d use to customize any RGB lighting if the keyboard were equipped, or if you connect any AURA Sync devices to the G14.

My lone complaint about software is with the MyAsus app. For the first couple of days, it would randomly force a notification through while I was gaming or running benchmarks, asking to do, well, to be honest, I don’t know what it wanted. I would angrily close out the alert and go back to whatever I was doing. I think it was asking me to set up the app so I could view system diagnostics in case I needed to troubleshoot any issues. Eventually, I launched it and went through the setup process up until the point where I was asked to give it permission to access my account name, profile photo, and information. It all felt very spammy.