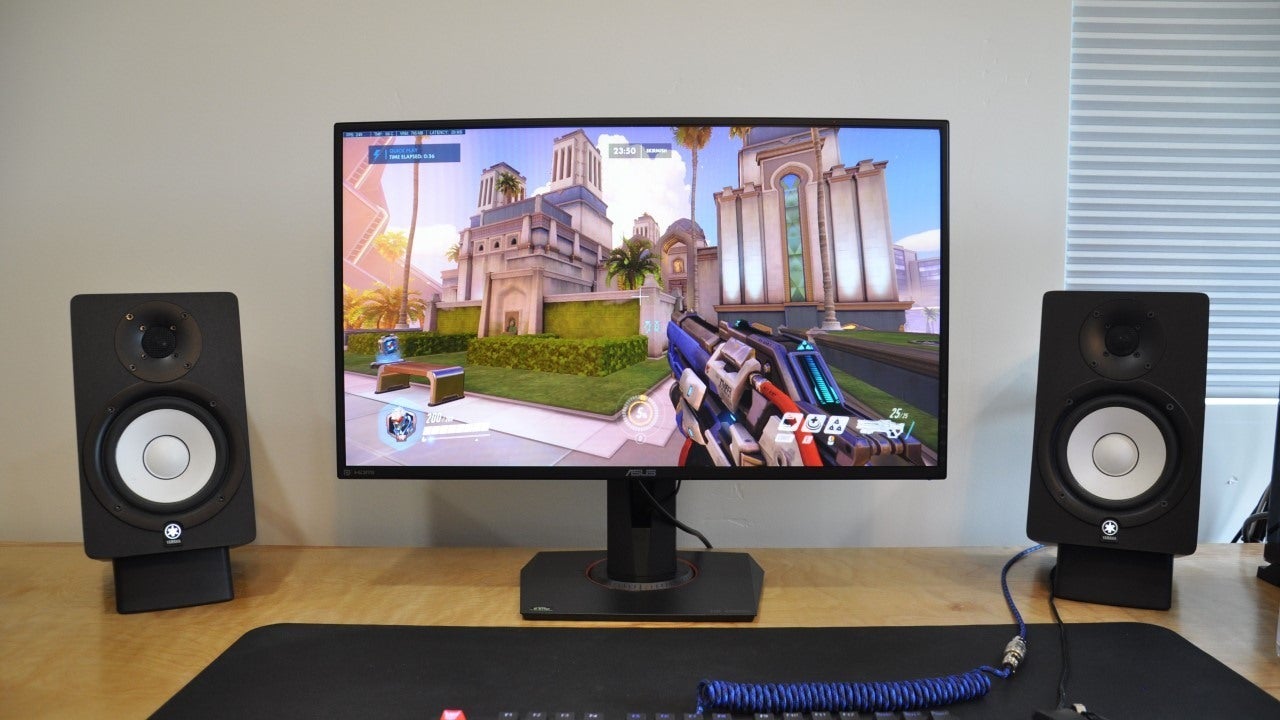 April 12, 2020 Off By tracy
240Hz gaming monitors are the new hotness when it comes to ultra-competitive play, but until now they’ve been limited to TN panels with poor viewing angles and less-than-stellar color accuracy. But Asus has finally broken the mold with the TUFGaming VG279QM, which features an IPS panel with a 240Hz refresh rate – or 280Hz with built-in overclocking – along with HDR, G-Sync, and a fast response time to keep motion smooth.

At $400, this display may not look too flashy, with a quarter-inch bezel around the edges and a mostly-unadorned stand. The stand has a cable routing hole in the middle, but it’s too small to easily fit cables through, which makes it kind of frustrating compared to more typical designs. The stand is, however, very adjustable, with customizable height, swivel, and tilt – you can even rotate it 90 degrees for a vertical orientation. On the back you’ll find one DisplayPort, two HDMI 2.0 ports, and a headphone jack – unimpressive, but not offensively bare. There are no USB ports, and the built-in speakers are, as you’d expect, not great.

But all that’s okay, because Asus nailed the important specs. The VG279QM is aimed at competitive, high-speed gaming, with a 1080p resolution and 240Hz refresh rate – overclockable to 280Hz through the on-screen menu, making this the fastest refresh rate monitor you can buy today. Asus warns that overclocking may introduce screen flickering or other issues, but it worked flawlessly for me, apart from an occasional black screen when disabling it (which I easily solved by turning the monitor off and on again). If 280Hz causes too many problems for you, there’s also a 270Hz overclock setting that’s more stable and still plenty fast.

That refresh rate would be impressive enough, but Asus is also using an IPS panel instead of the sub-par TN panels you usually see on high refresh rate displays. That means you get better viewing angles and better color reproduction, without the usual IPS drawbacks of slower refresh rates and response times. Asus puts a cherry on top with FreeSync support (that is certified G-Sync Compatible by Nvidia) and HDR400 (which, okay, can barely be considered HDR without local dimming, but it’s there). At 27 inches, 1080p is less sharp than I’d like, but it’s all in service of getting the highest refresh rates possible, so it’s forgivable for its target audience. I can’t decide whether I’d rather have a sharper 1080p image at 24 inches, or a more immersive experience at 27 inches.

You can adjust the panel’s settings via an on-screen display using a joystick-style controller on the back of the monitor. You get your typical brightness, contrast, and sharpness (which Asus calls VividPixel, for some reason), alongside presets for different types of gaming. Curiously, the default preset is named Racing, and it’s the most accurate of the bunch – Cinema uses far too cool a color temperature – so I recommend leaving it at the default, despite the confusing naming convention.

You’ll also find a few extra gaming features, like Shadow Boost (which lowers the contrast ratio but helps you see enemies in dark places), an on-screen crosshair, and a Sniper mode that zooms in so you can practice your faraway shots. Asus’ strobing backlight feature, which the company calls “ELMB Sync,” is unique in that it’s one of the only motion blur reduction features on the market that can be enabled alongside FreeSync and G-Sync – usually you have to pick one or the other. But it comes with its own drawbacks, which I’ll get to in a moment.

As with all monitors we review, I ran the VG279QM through a few of Lagom’s LCD test patterns to see how the panel performed. Gamma was a touch low on our test unit, hovering closer to 2.0 than the desired 2.2, and I found that black and white levels were just slightly crushed, meaning you might lose out on the darkest and brightest details in a given image. This is where that Shadow Boost feature can come in handy, as long as you don’t care about the loss in contrast ratio – which isn’t particularly great to begin with, due to IPS panels’ grey-ish blacks. Speaking of which, I also noticed some definite glow in the corners of the screen when it’s entirely black – again, typical of IPS panels, and well worth dealing with for the advantages IPS offers. But it’s still there, and still bothersome.

The rest of Lagom’s tests produced stellar results, though, with no visible banding in gradients, great viewing angles, and a fantastic response time. To test response time, Lagom uses a GIF that switches between two shades of grey – the slower your monitor shifts, the more flickering the GIF produces. With the default setting of Overdrive at 60, the VG279QM produced very little flickering, indicating a very low response time – a result backed up by Blur Buster’s UFO test, which showed almost no motion blur at 240Hz.

Note that Overdrive can naturally cause some “overshoot,” which manifests itself as visual artifacts around moving objects. At 240Hz, the default value of 60 was perfect, but if you’re gaming at lower refresh rates, you may need to lower the Overdrive setting to avoid those graphical glitches. At higher levels, the artifacting becomes too distracting for me to recommend. The same goes for the ELMB Sync setting, which seems to lock Overdrive at the highest setting. I wish Asus had left Overdrive user-configurable when ELMB is on, because with the right settings, this could be a killer combo. But thanks to the heavy artifacting, I recommend leaving ELMB Sync off. Feel free to give it a try, though.

If you play highly competitive games, this monitor is a dream. Colorful, fast-paced titles like Overwatch look incredible with IPS colors and super-fast response times, and while 280Hz is a subtle improvement over 144Hz, it is noticeably smoother. Darting around the map feels effortless, and the complete lack of motion blur just makes each movement so smooth and precise that it’s hard to go back to displays with higher response times. Those kinds of butter-smooth framerates are tough to hit unless you have a pretty decent graphics card, though, even at 1080p. You may have to drop some graphical settings to get there, too, so make sure your PC is up to the task before dropping the cash to go all-in on refresh rate.

With more typical single-player games, like Battlefield V, the value add becomes a bit murkier. Sure, you still get the amazing colors of an IPS panel, not to mention the nearly blur-free response time. But you also have a lower contrast ratio than VA panels, barely-there HDR performance, and a lot of wasted refresh rate, since you’re highly unlikely to hit 240+ fps in high-fidelity titles. Couple that with the not-quite-sharp-enough 1080p resolution, and many gamers would probably do better with the1440p, 144Hz version of this monitor for a similar price – especially considering the advantages of higher resolution on the desktop. But unlike previous monitors in this space, the VG279QM acts as a pretty good all-arounder, without the larger sacrifices that 240Hz TN panels come with.

Still, there’s a place for those TN panels – if you really want 240Hz but don’t have the budget for Asus’ display, check out AOC’s AG251FZ2. At $279, it’s more affordable, albeit with a less impressive TN panel and a slightly smaller 25” size. But if you can swing the $400, trust me: the VG279QM is a big step up from its TN predecessors.