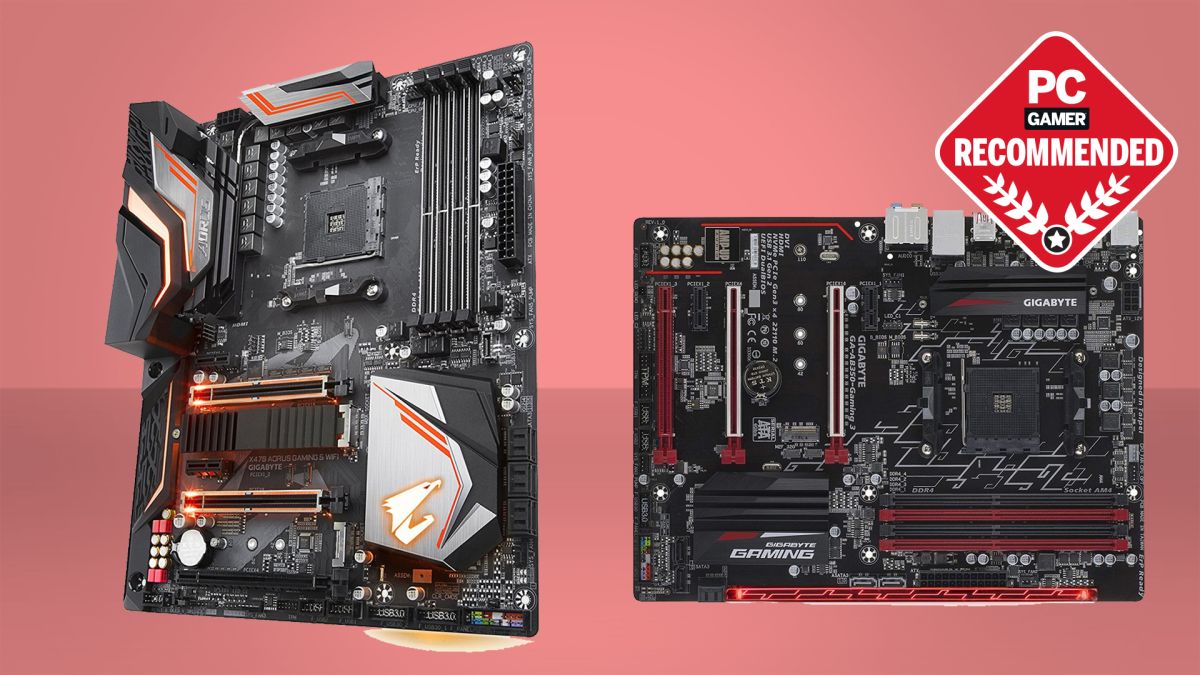 If the release of the 3rd generation Ryzen 3000 CPUs has persuaded you to go with an AMD build, you’ll want to pair it with one of the best AMD motherboards. If, on the other hand, you’re undecided whether or not to go with Team Red, we have a useful AMD vs Intel guide which should give you a great starting point. Regardless of which camp you belong to, you’ll want to make sure you have the best housing for your components, including the best graphics card. But if you’ve already made your decision, picking up the best AMD motherboard will ensure a good foundation for the rest of your build.

High-end gaming PC build guide
For a look at how to incorporate your board into a luxury machine, check out our guide to building an awesome high-end rig that will easily handle modern triple-A games at the highest settings.

It’s often tempting to look at older models because let’s face it, the gap between a couple of chipset generations is often negligible. But even if you save a bit of cash now, you may find yourself with a headache when you come to upgrade further down the line. Motherboards and CPUs aren’t the easiest components to replace so future-proofing now could save you more work in the future. But the motherboard you pick will play a bigger part in your overall set-up than just housing your components and there a few things you should consider before making your choice. You should figure out how many M.2 and PCIe slots you’ll need for your build as well as the number of USB and other ports you’ll end up with.

It’s also important to figure out which type of processor you’re going to use in your build as this will be crucial when it comes to choosing the right motherboard. Both the CPU generation and the socket type will dictate which motherboards will work. Having said that, compatibility shouldn’t be a problem if you plan on picking up the motherboard and CPU together as AMD’s current-gen Ryzen CPUs—excluding Threadripper—use AMD’s AM4 socket. One more point to think about is whether you’re going to go with ATX, mini ATX, or micro ATX.

Of course, if you already have an AMD CPU and only want to replace or upgrade your current motherboard, keep in mind that 1st generation Ryzen CPUs aren’t compatible with the new X570 motherboards.

Finally, it’s worth noting that not all motherboards support processor overclocking or two GPUs. And while we don’t necessarily suggest Crossfire or SLI for gaming these days, you should ensure the motherboard you choose supports those features if that’s something you’ve got your heart set on. If you’re looking for a motherboard that supports multiple GPUs, the X-series chipset is your best bet. And for overclocking, the X-series (X370/X470/X570) or B-series (B350/B450) should give you what you need.

The MSI MPG X570 represents an amalgamation of bleeding-edge motherboard tech, built to help you get the most out of AMD’s 3rd gen Ryzen CPUs. It has four DIMM slots that can handle speeds up to 4400MHz (there’s not much point going beyond DDR4-3800) and two M.2 slots sporting PCIe 4.0. MSI’s MPG X570 is all about getting the most out of the best components.

The rear I/O panel features 7 USB-A ports for peripherals, as well as a single USB-C port for connectivity and high-speed data transfer. There are headers for the included wireless antenna to help with wireless connectivity, as well as a gigabit Ethernet port. The MPG X570 does support Wi-Fi 6, and while that does necessitate a Wi-Fi 6 compatible router for the fastest speeds, it will also work with existing Wi-Fi 4/5 routers (formerly 802.11n and 802.11ac). Also of note is the HDMI port, which many X570 boards omit (not that we’d really recommend using an AMD APU with integrated graphics in a high-end board like this).

The pair of M.2 slots each have a dedicated heat shield and fan, and while this does help prevent potential thermal throttling, it makes installing or replacing them a more delicate process than with their exposed counterparts. Frequent part swappers are better off without the heat shield.

The MPG X570 features enough compatibility to get the most out of your hardware now and in the future, provided you’re willing to pay a premium for it. While it’s certainly an excellent mobo, if you aren’t already committed to a shopping list of top-of-the-line components now or in the near future, you may want to consider a slightly less expensive board for your needs. The MSI X570-A Pro omits some of the extras like Wi-Fi and the M.2 shields, but it still runs fine and costs nearly $100 less.

The Asus ROG Crosshair VIII Hero (Wi-Fi) is another excellent if opulent board for 3rd gen Ryzen processors. This gaming motherboard comes packed with all of the trappings you’d expect, including an on-board thermal sensor, onboard power and reset buttons, and a BIOS flashback option on the rear IO panel. The board even has it’s I/O shield pre-mounted to avoid any embarrassing mishaps after you’ve screwed in all of the stand-offs.

This standard ATX board can support a pair of GPUs in its PCIe ports and up to 128GB of RAM with its four DIMM slots along with a pair of M.2 SSDs. These specs are generally par for the course, however, an array of 10 USB-A ports as well as USB-C support for a front panel connection provide ample support for any number of peripherals, which helps put this board a cut above its peers.

Sleek matte black and chrome finish and subdued RGB lend an air of subtlety to this particular board, and while the seamless M.2 heat shields make the Crosshair one of the cleanest looking boards on this list, it does make swapping out SSDs a bit problematic. This isn’t a glaring issue but does add an extra step whenever you’re trying to upgrade your storage. Overall, this board has tons of attractive features, but its comparatively steep price tag may draw your eye to more affordable offerings.

Most B450 features in a mini-ITX board

Packing even a mainstream chipset into a mini-ITX board usually means deep cuts, the inevitable sacrifice of a number of features in favor of that smaller form factor. ASRock’s Fatal1ty B450 Gaming-ITX/ac stands out from and increasingly crowded mini-ITX crowd by fielding a petite board without slicing off any of the most important selling points.

For less than $120, you get excellent performance-per-dollar with excellent overclocking support for both the CPU and memory. It’s competitive in performance terms with most X470 boards at a significant price discount, really only losing a handful of USB ports in the move to mini-ITX. If you’re looking for a small but highly capable mobo at an excellent price, look no further.

Only one M.2 slot

Unsurprisingly, the X370 version in the Auros stable is also an excellent board, a fantastic, inexpensive mobo that will still satisfy the majority of gaming builds. While it’s not really optimized for overclocking (our testing with a Ryzen 7 1700X chip peaked at 4GHz), it’s an excellent option for anyone looking to shave a few dollars off their motherboard cost to tuck into other more vital components.

It does lack Wi-Fi and Bluetooth, so if you’re not parking it next to a handy Ethernet connection you may want to reconsider (you’d be better spending the few extra dollars a Wi-Fi card would cost you upgrading to a board that natively supports it), but is otherwise a fully featured, highly capable motherboard that can be had at a very reasonable price.

The best budget AMD board

If you’re in the market for a B350 board at a great price that’s still loaded up with features, Gigabyte’s AB350-Gaming 3 is an excellent choice, and can often be had for right around the $80 mark. It packs 4 DIMMs with support for up to 64 GB of RAM and a full three PCIe slots (though only the top lane gets a full serving of bandwidth). There’s a raft of USB ports, including speedy 10Gbps USB 3.1 2nd gen, and robust support for RGB lighting effects, if you’ve got a tempered glass window on your case and want to showcase your internals.

The AB350 is a perfect example of trimming away fat to provide an excellent board at the lowest possible price, something Gigabyte excels at (as the rest of this roundup has proven in spades). For an AMD build with a responsible budget, it’s one of the best options available.