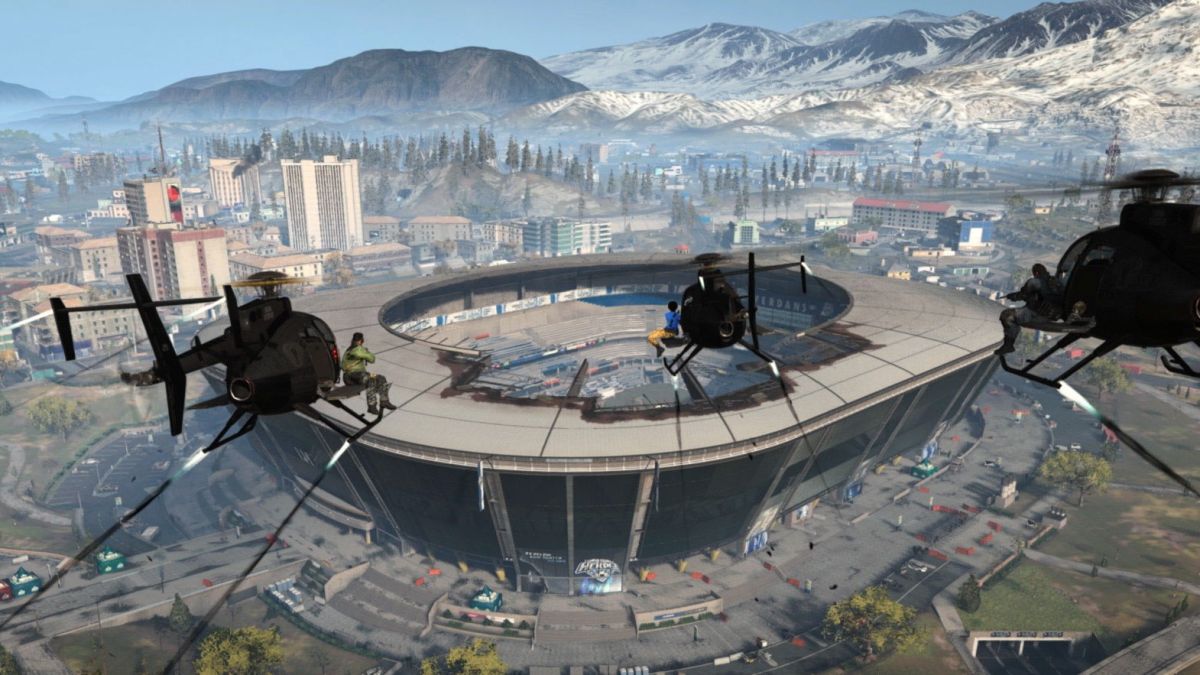 CoD: Warzone stadium code: How to get the Enigma blueprint in Warzone

Win more with these Warzone loadouts

What is the CoD: Warzone stadium access code? That’s the big question, but before the answer does you any good, you’ll have to get inside some locked doors first. Ever since Infinity Ward’s battle royale mode launched, the huge, once-closed arena stood out like a sore thumb amid the rolling wastes of Verdansk. Now, as part of the launch of Call of Duty: Modern Warfare season 5, the mysterious ground has opened, triggering a storm of us exploring every inch of the stands.

And, as it turns out, the stadium offers some intriguing secrets. Naturally the space is full of loot, but we soon encountered a few locked doors with keycard slots next to them. We soon discovered that these doors function like the Warzone bunkers spread around the rest of the map, but then there’s the other door with a keypad outside, which requires even more work to get past, like the infamous bunker 11.

Now it seems like all the Warzone Easter eggs have been solved, so you can find out how to do that for yourself below. For now, though, here’s how to get into all the ground’s locked doors and grab yourself the Warzone Enigma blueprint.

How to get the Warzone stadium code, and the Enigma blueprint

Getting into a single stadium bunker is one thing: Getting into two or three in a single match is quite another. This is what you’ll have to do if you want to get past the double doors with a keypad next to it on the top level of the stadium and get the rare rewards contained within.

So, inside each standard keycard room—details on how to get into those can be found further down this page—is a computer that gives you a Warzone stadium code that changes every match, a series of symbols and numbers. As YouTuber Geeky Pastimes explains in the video below, when you have the first code, write it down, and open another keycard door to fill in most of the remaining numbers. This should give you all but one of the numbers you need, so you can then approach the double doors on the executive level with trial and error.

The video above shows what’s inside the room, so beware of spoilers if you want to work it out for yourself. So, while the infamous bunker 11 featured a nuke inside—seemingly a reference to the next game in the shooter series, Call of Duty: Black Ops – Cold War—whether there’s something similar inside this boardroom is yet to be determined, but there are some interesting-looking maps and computers. What you certainly get is the AMAX Enigma blueprint (there’s probably a joke in there somewhere), more loot, and some celebratory fireworks outside. Nice.

So, before you can even get the code, you need to get past at least two doors with keycard slots next to them. Like the red keycards you used to get into the other bunkers, now there are new keycards specific to each of the three locked stadium keycard doors. They are:

If you find one, it’ll appear on the bottom-left of your screen next to your name. They also seem to be random drops, so you’ll need luck to be with you as you explore this hot zone.

If you successfully get inside you’ll be able to hoover up a few chests full of top-tier loot, but what you really want is the Warzone stadium access code, so use the instructions above to combine the code you get from the computer inside—which, remember, changes every match—with another code in a different keycard room to get a better idea of the overall puzzle solution you’re looking for. Below are the locations for each keycard room, but consult the video guide above if you’re stuck.

The EL21 keycard opens a door on the top floor of the stadium on the southeast side. Wind round the corridor until you see the door in the video above with the keypad next to it—it’s a circular one that runs around the stadium, so you’ll see it eventually.

In the lowest level of the stadium, in the car park, the P216 keycard door is in the north-west corner. Once you’re in the garage, head down the slope to where you need to go.

Search the middle level for the CL19 door. It’s found by the corner of the bar in the club lounge.