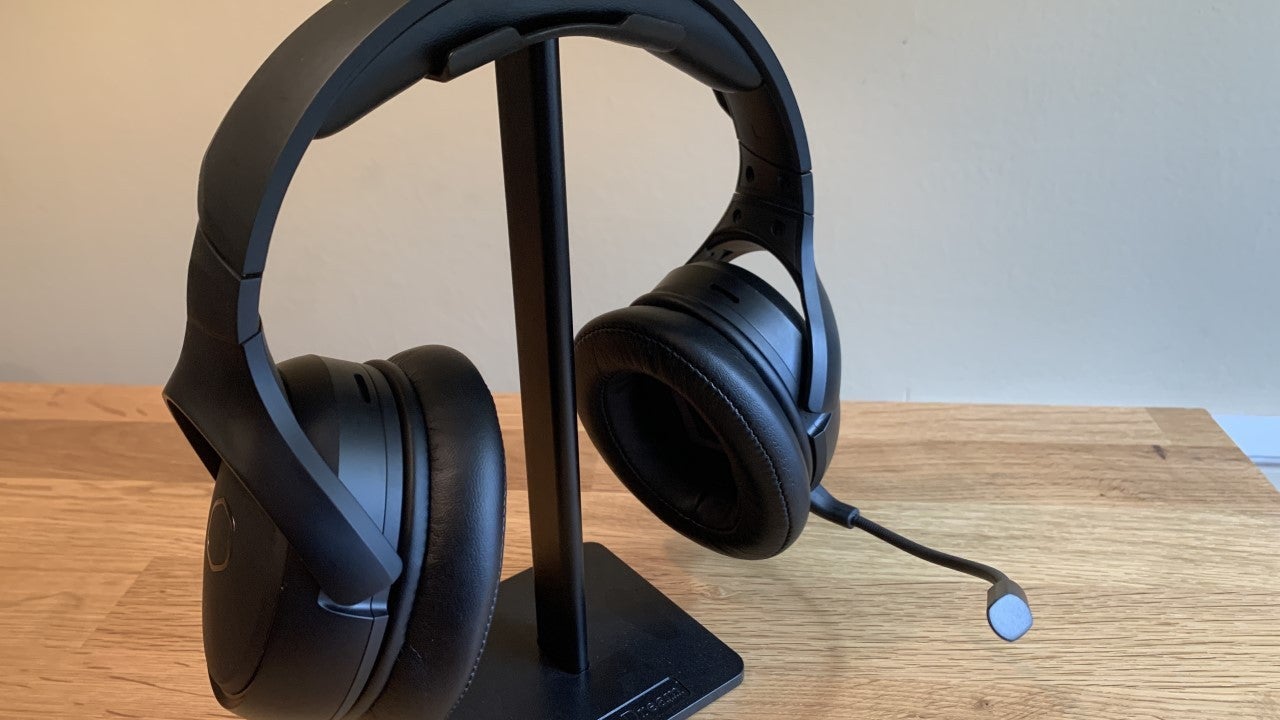 March 15, 2020 Off By tracy
Cooler Master isn’t the first company that comes to mind when I think about gaming headsets. Though the PC gaming component maker has been in the audio game for some time, it has had trouble differentiating itself from more popular manufacturers like Astro, Turtle Beach, and HyperX. CM’s newest headset, the MH670, gets a lot of things right, particularly in the design of physical headwear – but the sound and other features fall a little short of the company’s more popular competitors. Still, the MH670 gets more right than it does wrong, and delivers a solid budget-conscious alternative for players who specifically want a wireless headset with surround sound.

The MH670 looks like a quality headset, with a clean design that avoids “gamer” cliche. The simple black plastic shell with the hexagonal company logo on the cans looks sleek and interesting without making the kind of visual “statement” many companies feel compelled to make. The top band has a stainless steel core, so the headset is durable and flexible. The plastic components, including the rotating mounts for the ear cups, feel sturdy and well-made as well.

The top band is quite wide, so even players with a big head like myself will find that the cups fall into place with pushing against the sides of your head. I went back and forth on whether or not that’s a good thing – I like a little swaddling from my headphones, but would prefer to feel no pressure, rather than too much. The fit is comfortable, though, with wide ear cups that don’t clamp or crimp your ears. The “high-density” foam padding provides a lot of give, so the cups feel soft against your ears and head.

While the look and feel are on point, the actual sound production on the MH670 leaves something to be desired. Despite its 50mm drivers and plenty of room in the cup for the sound to breathe, the tone feels somewhat muted across the board. When listening to songs like “Lava” by Still Woozy, the high tones come in clear, but lack the bright texture you can get in other headsets. With mid- and bass-levels, the sound simply feels a bit muted. You can course-correct the mids a little bit using the virtual mixer in Portal, Cooler Master’s configuration software, but better mixing can’t make the bass boom or prevent a certain amount muddling among instrumental channels.

As you might expect, everything sounds just a bit better with the surround sound turned on, whether or not you need to simulate audio position. The sound, regardless of whether you’re watching a movie, playing a game, or listening to music, comes through a little louder and a little clearer. That said, it isn’t necessarily so pronounced that you’ll quickly notice the difference in stereo recordings.

The button layouts on the underside of the cups can be a little wonky. On the left side, from top to bottom, you have a volume dial, mic mute, 3.5mm audio jack, and a port for the detachable microphone, which comes with a rubber cover. The 3.5mm jack has a custom twist-lock system, which is great because it means you’ll never rip out the headset, but a pain if you find yourself needing to swap out a cable for any reason.

On the right, from back to front, you have the 7.1 surround sound toggle, microUSB port for charging, an indicator light, and finally power. Placing the power button in the most awkward spot on the headset feels like a design faux pas, as it makes the first and last thing you do on the headset unpleasant. Likewise, while it isn’t hard to tell whether or not the surround sound is on when bullets are whizzing by or there are footsteps coming up behind you, it would be nice if there was a light or other indicator on the button to let you know if it’s on or off, as it can be difficult to tell before you get into a game.

The MH670 connects wirelessly to PC, PS4, and Xbox One using a 2.4GHz USB wireless dongle. I did not find it introduced any kind of audio lag after dozens of hours of testing. If you prefer a wired connection, though, it comes with the aforementioned locking 3.5mm audio cable. The battery life is also strong: According to Cooler Master, it gets 25 hours on a single charge. I found I needed to recharge the headset after about 10 days of regular, daily use.

The MH670 has some software-based customization options, which you can adjust by downloading Cooler Master’s configuration app, Portal. It’s worth noting that Cooler Master has multiple versions of Portal that are required for different devices, so it is slightly more complicated to download than the average configuration app.

The software supplies two types of customization – a basic sound mixer to adjust levels based on what you’re listening to, and a surround-sound customization feature that lets you adjust the position and distance of the virtual speakers.

The sound mixing allows you to adjust five individual frequencies, or just play with the bass and treble. Chances are if you actively want sound mixing in your headphones, you will want something more powerful than this, but it is nice to have the option to recalibrate the sound for when you need to hear something for gameplay purposes, versus when you want the sound to wash over you. You can also adjust the volume of both the headset and, more importantly, the microphone.

Adjusting the speakers, particularly the “distance,” offers a tradeoff. When you push the speakers closer, the volume goes higher, but the sound comes through less clear. If you push the speakers too far, however, the sound also loses texture. I never felt compelled to change speaker positions because I was generally happy with the sound “coverage” and positional audio but, again, it is nice to have the option.

The most impressive aspect of this headset is far and away the surround sound. For simulated surround sound on a wireless headset, the positional audio was surprisingly accurate. I could track player movements based on footsteps in shooters like Call of Duty: Modern Warfare and hear spooky murmurs coming out the walls in Control.

Overall, though, the soundscape is far from perfect. Again, music simply doesn’t come in with the nuanced texture that you’ll get from a high-end headset. Certain sounds, including explosions and other booming effects, tend to come in somewhat muted.