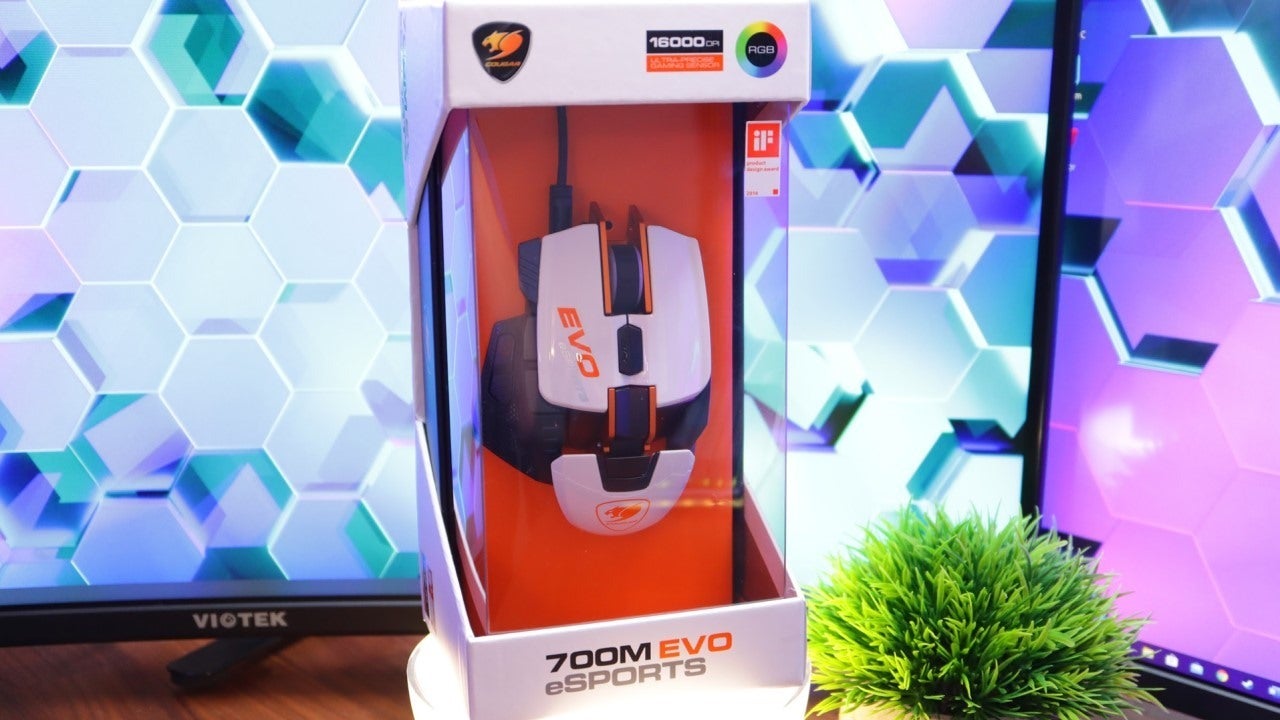 July 17, 2020 Off By tracy
When it comes to first-person shooters, your gaming mouse becomes an extension of your arm. You should be able to react without thinking every time an enemy pops up from cover and know that when you line up a headshot, it’s going to land perfectly every time. Ergonomics and tracking are everything, and when they combine, you can almost forget you’re using a mouse at all.


The Cougar 700M EVO Esports is Cougar Gaming’s premiere esports mouse and custom-made for first-person shooters. It features specially designed sniper and trigger buttons that complement its 16,000 DPI sensor, but its biggest claim to fame is its customizable weight and palm rest systems. At just over $79, should this be the mouse you ride to gaming glory?

The 700M EVO Esports is a slick mouse and Cougar knows it. The packaging is closer to a display case than any I can recall and features a prominent iF Product Design Award badge to make it seem even more special. The mouse embraces its futuristic appearance with its floating palm rest and looks more like a race car than any kind of predatory animal. Inside the box, you’ll find an alternate palm rest and four weights to customize its feel, as well as a set of replacement mouse feet.

The 700M EVO is available in normal and Esports versions, but the differences are only skin deep. While the standard version is all black, the Esports version sports a glossy white finish that’s accented with Cougar Gaming’s iconic orange and trimmed with black grips. The sides are stamped with a hexagon pattern that looks great and enhances the whole “cyberpunk future” vibe. Both versions also feature customizable RGB lighting in the mouse wheel and DPI indicator, but the Esports version is definitely the more visually interesting of the two.

The mouse is built on an aluminum frame to increase its durability. Flipping it over to the bottom, you can tell that it’s a single piece that’s been cut and bent to shape, which increases its rigidity and decreases the overall weight. With the stock palm rest, it’s near in size to the Logitech G502 HERO, but weighs 16 grams lighter at only 105g. It’s not the lightest for its size, though. Using the alternate palm rest, it becomes much closer in shape to Corsair’s M65 RGB Elite which is only 97g. These weight differences are perceptible but not game changing, and the 700M EVO Esports sits comfortably in the center of the middle-weight bracket.

The 700M EVO features eight buttons, including the standard six, as well as “sniper” and “fire” buttons just off your thumb and index finger. Cougar has done an excellent job with the ergonomics and making each of its buttons usable. The sniper button sits almost directly under my thumb, but is positioned at a 45 degree angle which kept me from clicking it by accident even when I was tense and squeezing the mouse. The extra trigger is positioned at the same angle so there were no misclicks there either.

The mouse’s real claim to fame is its adjustable palm rest and weight system. Like the R.A.T. series from Mad Catz, the 700M EVO allows you to adjust the angle of the mouse with a tensioning knob, but you can also move the entire palm rest along a curve track to further adjust its angle and contour. If you’d rather have a short mouse or have less contact with your palm, you can swap out the stock piece for the smaller palm rest included in the box.

I found this system hit or miss. Even as a gamer who alternates between palm and claw grip, I found it difficult to find a position I was comfortable with. For the first day, I found the clear gap between the halves distracting. Even now having used the mouse for more than two weeks, I find myself making adjustments because it never feels quite right. It’s either the right length and too high or the right height and too short. The stock palm rest is also slightly off kilter, so I feel the edge more on one side of my hand than the other. The alternate plate is also matte black, which destroys the sleek look of the mouse and turns it into something closer to a cyborg.

The weight system is much more straightforward, but I’m thankful it’s not something that needs to be adjusted often. You can add up to four weights to bring the mouse to 121 grams, but the tray has a nasty tendency to stick in place and is difficult to remove. I had to completely take off the palm rest any time I wanted to change weights.

That isn’t to say either of these systems are bad. After some time getting used to the palm rest, it became much less distracting, but these are definitely qualities to keep in mind. If you’re looking for a “plug it in and go” mouse, the 700M EVO isn’t it.

The mouse is also compatible with Cougar’s UIX software for RGB and macro programming. With only two RGB zones, options are limited, but you can set a static color, breathing, and color shifting effects. Three DPI levels can be saved to the mouse ranging from 100 – 16,000 in 50 DPI increments, as well as the sniper preset that takes effect when the button is held. Polling Rate is also adjustable from 125Hz all the way to 2,000Hz. Like gaming mice from other brands, you can map macros and shortcuts inside the software, too, with the exception of left click and, oddly, the sniper button. UIX is full featured, but feels pretty basic with even a stay typo to be found.

Under the hood, the 700M EVO Esports has received some serious upgrades. The sensor has gone from an unnamed laser sensor to a PixArt PMW3389, the same found on Cooler Master’s MM710. It bumps the maximum DPI to 16,000 and improves the tracking speed to 400 IPS and 50G of acceleration. Compared to 2017’s 700M Superior, which had a maximum speed of 150 IPS and 30G acceleration, these are massive improvements. The switches also received a dramatic bump in quality, going from a 5 million to 50 million click lifespan. The polling rate received its own upgrade and was doubled to an incredible 2000Hz. That means the mouse is reporting your position two thousand times a second and is on the cutting edge of gaming mice today.

As an esports mouse, I lost hours playing Battlefield V and Overwatch to test its tracking. There was never a time when the mouse felt less than pixel perfect, even when using high DPI with low in-game sensitivity. I wasn’t able to force the mouse to spin out or lose accuracy. If there was a mistake, it was mine.

The sniper button is my hands-down favorite of any mouse. It’s angle is perfect for preventing misclicks but is also easy enough to press that it quickly became second nature to use when lining up shots across the map. No mouse will single-handedly make you a better player, but I certainly felt like I landed more shots with it than not.

The second fire button was equally easy to use and managed to increase my speed as a player. Its positioning to the left of my index finger let me use quick flicks to rapidly change weapons or trigger my ultimate. It felt much more fluid than clicking the mouse wheel for melee attacks, too. Similar to the sniper button, the angle made it so I never pressed the button by accident.

The palm rest, while distracting at first, never really presented a major problem unless I was really pressing on it and made it slide down the track. Even though it latches into position, I was able to slide it out of place by leaning a bit too heavily into the mouse.

What turned out to be a bigger issue was the cable. It features a tight braid and feels durable, but it’s far too stiff and often got in the way without a mouse bungee. Even after two weeks of use, it never completely lost its kinks from packaging and frequently got bunched up on my desk. Having to use a mouse bungee in this day and age is absolutely disappointing.

The Cougar 700M EVO is available on Amazon with an MSRP of $89.90. The regular version has a black colorway, while the Esports edition we tested has white and orange accents.

The best PC Gamer forum threads from this week

Here’s How to Get 83 Years of Free Netflix