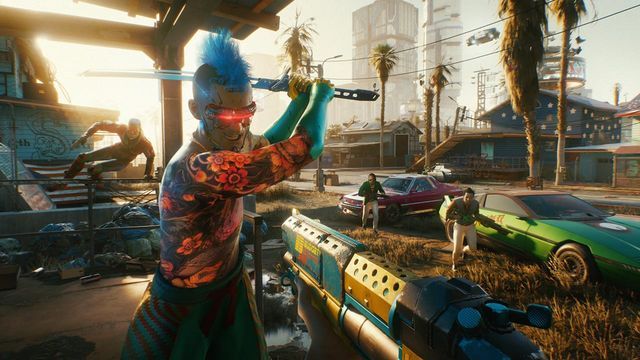 Global Community Lead Marcin Momot took to Twitter to address claims which originated on Reddit, where a fan had taken a screenshot of Cyberpunk 2077 from Nvidia’s RTX 3000 GPU reveal event. A vista from the game is accompanied by a tag that mentions “200GB Games,” which has led some to surmise that the game may take up 200GB of hard-drive space.

“The game won’t take up 200GB when installed,” notes Momot. “You can expect the required HDD space to be on par with other modern titles.” Momot didn’t reveal exactly how big the game is, but he did note that system requirements for Cyberpunk 2077 are “coming soon.”

While the @CyberpunkGame system requirements are not out yet (they are coming soon, though!), I wanted to address this topic from reddit. The game won’t take up 200GB when installed. You can expect the required HDD space to be on par with other modern titles. pic.twitter.com/tRigjPWLfC

Nvidia used the Cyberpunk screenshot as an example of a demanding game that would take advantage of its RTX IO technology, which lets the graphics card handle decompression in order to decrease the potential strain on your CPU and boost load times.

In other Cyberpunk 2077 news, it was recently revealed that the game will feature free DLC on top of paid expansions. You can also check out the RTX Showcase trailer that debuted during Nvidia’s conference to see how the game will take advantage of ray tracing technology.