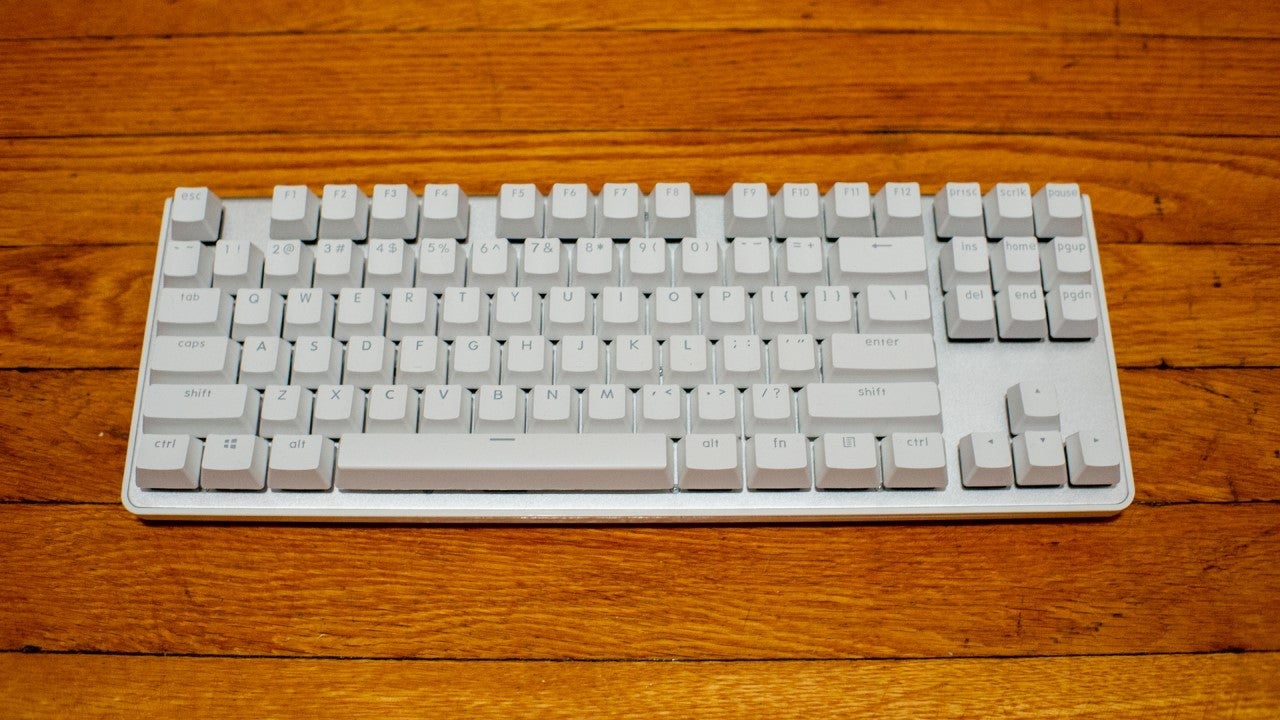 April 22, 2020 Off By tracy
G.Skill is out to get gamers and non-gamers alike using mechanical key switches with its new KM360 keyboard. At $49, it’s a highly affordable keyboard offering the bare minimum of what computer users need. While that doesn’t position it among the best gaming keyboards, the price does pit it competitively against the best cheap gaming keyboards. Let’s see how it stacks up.

The G.Skill KM360 has a no-frills design – but that’s not to say it’s shabby. I tested the white model (a black one is also available), and the combination of white plastic and a light aluminum top plate make this keyboard right at home beside Apple’s Mac aesthetic. The thick plastic and aluminum also make it sturdy.

The key caps are all white, with the legends all lit by white backlights. When the backlight is off, the legends darken enough to stand out against the white of the keycaps. While there’s no color options from the backlighting, there are four different brightness levels, and of course an off setting.

For the most part, the lighting is effective. Only on keys like Shift and Enter does the small single LED bulb struggle in fully illuminating the legend. But, I’ve seen plenty of much more expensive keyboards with backlighting that was no better. One downside: in dimmer environments, the white caps let some light bleed through, giving the keyboard a somewhat dirty look when at maximum brightness.

The G.Skill KM360 has a tenkeyless design, and beyond the main keys, there are no extras. That means no multimedia controls or extra functions. There’s not even an indication that pressing the Function key and Up or Down will adjust the backlighting.

But, those are considerations that could inflate the price while only benefiting some users. As such, the G.Skill KM360 skips those to deliver an affordable keyboard while retaining the benefits of Cherry MX key switches, full N-Key rollover, and anti-ghosting. All of the keys use Cherry MX Red switches except for the Space bar, which has a heavier Cherry MX Black.

On the bottom of the KM360 are two small legs that can raise the angle of the keyboard for more comfortable typing. On the back, there’s a single USB-C port to connect the keyboard to a computer using the included 1.6m USB A-to-C braided cable. The detachable cable is a good move to enhance portability and product longevity.

The Cherry MX Red key switches help the G.Skill KM360 stand out as a gaming keyboard even if G.Skill has it positioned as a professional device. With N-Key Rollover and Anti-ghosting, it won’t run into any issues while gaming. The Cherry MX switches are rated to 50 million clicks, so it’s not going to wear out mid-game quickly.

The Cherry MX Red switches are linear, so there’s no pronounced actuation point, but it doesn’t take long to get a feel for where the keystroke will register. For gaming, that means they offer a reliable, consistent feel.

I put several hours into Overwatch on the KM360 to make sure all of my movements registered quickly and abilities went without a hitch. I’ve used many keyboards with Cherry MX Red switches, and playing with these felt just the same.

I could reliably juke side to side, avoiding enemy fire, and reaching over to use an ability was easy. The keycaps are decently contoured, so I could feel when my finger was at the edge of a key and either move it fully to the next one, or stay on it and avoid hitting multiple keys. The value of a good contour is tangible after having used the Cooler Master SK650, which has such flat keycaps that I miss-pressed frequently.

The heavier Space bar is a solid touch as well. As someone who often rests my thumb on the Space bar while gaming, I didn’t find myself accidentally jumping in games.

It’s not all good, though. Outside of gaming, Cherry’s key switches are not always as enjoyable. They have considerable wobble, and that can make typing more tedious. Aside from that wobble, the experience will mostly come down to preference, though. For those that have tried and prefer the Cherry MX Red feel, this keyboard offers exactly that at a low price with few caveats.

There are mechanical keyboards in a similar ballpark, but not the same one. I’ve used the Cooler Master CK530, which has more frills, like RGB lighting and media controls, but comes at a $69 price point while using Gateron key switches. Meanwhile, our current picks for best cheap gaming keyboards lack true mechanical switches.