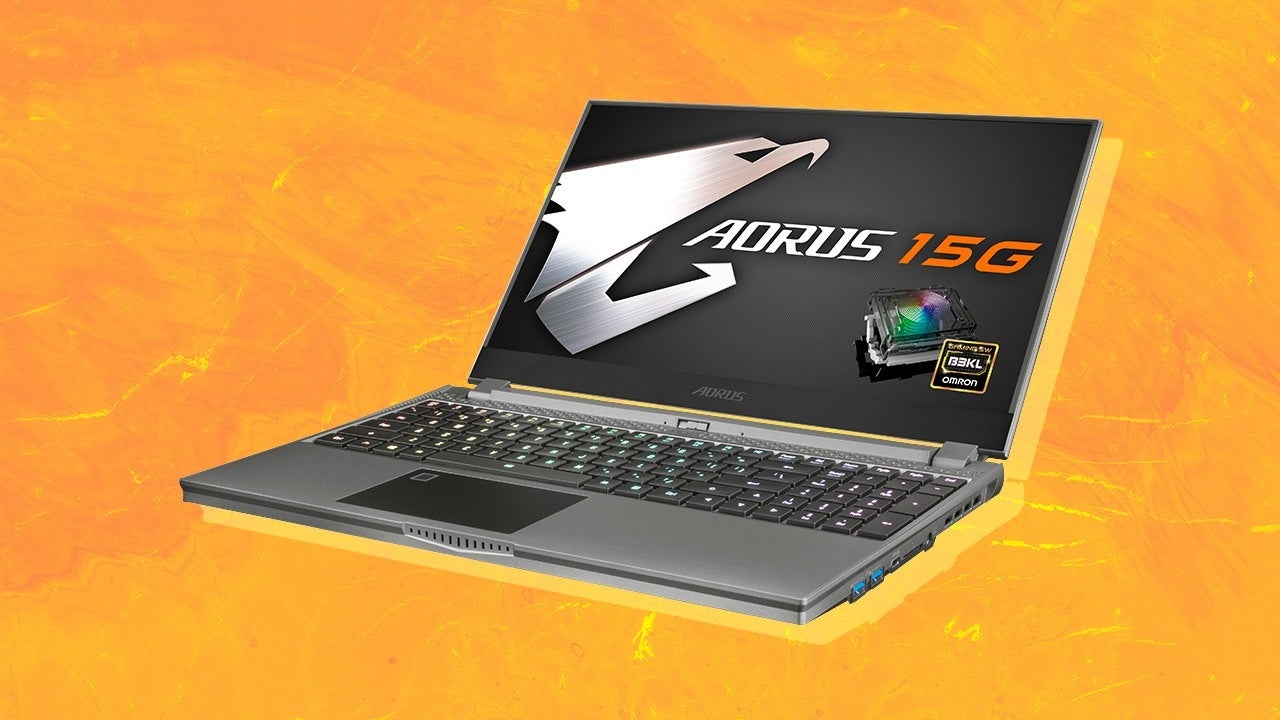 April 16, 2020 Off By tracy
At the start of April, Nvidia and Intel announced we’d start to see RTX 20-series Super GPUs and 10th Generation H-series processors in gaming laptops soon. And that’s exactly what we have here in Gigabyte’s Aorus 15G. The combination of 10th Generation Intel Core i7 and an Nvidia RTX 2070 Super with Max-Q, on paper at least, is compelling. With improved power efficiency and a promise of performance increases, I was eager to spend some time with 15G.


Overall, the 15G shows the potential that the latest wares from Nvidia and Intel bring to laptops. It’s too early to gauge the true performance potential of this setup across vendors, but if the rest of device makers are able to match or surpass what Gigabyte has done here, then we have a lot to look forward to.

Here are the specifications of the $2,199 Gigabyte Aorus 15G I’ve been testing:

The Aorus 15G is one of the most unassuming gaming laptops I’ve tested. When I opened the box, the silver housing reminded me of something I would expect to see from Dell’s laptop lineup. Once I lifted the lid and saw the mechanical keyboard – and aluminum chassis with almost no bezels around the display – I realized I’d been fooled.

The 15.6-inch FHD display has a 240Hz refresh rate with a resolution of 1920 x 1080. The bezels on either side, as well as along the top, are so thin they’re nearly invisible. The top bezel keeps its slim size thanks to the webcam being placed on the bottom housing, complete with a physical cover you can slide over to block the camera for privacy.

The power button is just below the camera, centered on the housing. A full-size mechanical keyboard with individually lit RGB keys is completed by a number pad on the right side. The keys use an OMRON mechanical switch, giving them that familiar tactile feel and audible click you only get with a mechanical keyboard – although, it’s a lot quieter than the Keychron K2 I’ve been using. It feels excellent, enough that the keyboard on the Aorus 15G is my favorite out of all the gaming laptops I’ve tested.

The trackpad is offset to the left of center, and is on the small side of the scale for this size of a laptop. A square in the top-left corner of the pad serves as a fingerprint sensor you can use to unlock the laptop. It took a few extra tries to get it to read my fingerprint during setup, but since then it’s been fast and reliable. The trackpad feels, in some ways, like an afterthought on the 15G. It works, but there’s nothing noteworthy about using it. It’s a trackpad that does trackpad things, and that’s just fine for a laptop that most users will have an external mouse connected.

Ports-wise, the Aorus 15G gives you plenty to work with. On the right side, you’ll find two USB 3.2 Gen 1 ports, a Thunderbolt 3 Type C port, the SD card reader, and a charging port. On the opposite side is a third USB 3.2 Gen 1 port, a headphone jack, ethernet port, HDMI 2.0 port, and a miniDisplayPort 1.4 connector. All of these are positioned on the front half of the housing, leaving room in the back for cooling vents.

The 15G measures 14 x 9.84 x 0.98 inches and weighs 4.85 pounds. I’ve been carrying it around my home, moving room to room during the stay-at-home order, and while it’s definitely heavier than the Asus ROG Zephyrus G14 I just finished reviewing, I could see tossing the 15G in my backpack and taking it to a coffee shop for remote work, or taking it on a flight with little hesitation.

Nvidia’s mobile version of the RTX 2070 Super has 2560 CUDA cores, compared to 2304 cores for the standard RTX 2070, a slight bump in the base clock speed, which starts at 930MHz compared to 885MHz, and a boost clock speed that starts at 1,155Mhz versus 1,125Mhz. The Super has a slight advantage on paper, and in my testing, that proved to be true.

Gigabyte has tuned the RTX 2070 Super in the Aorus 15G on the low end of the base and boost speeds, at 930MHz and 1,155MHz, respectively. Here’s how it performed in IGNs standard benchmark tests:

As you can see, the 15G kept pace or beat the Alienware m15 R2 and its RTX 2070 w/Max-Q, which has a higher base and boost clock speed. In some tests, like Far Cry 5, the 15G actually performed on the same level as Acer’s Predator Helios 700 and its RTX 2070 that lacks Max-Q tuning.

For me, the benchmarks were somewhat expected; a mishmash of matching and passing the RTX 2070 with Max-Q. What I didn’t expect, however, is the performance when gaming.

I’m still on a Call of Duty: Warzone kick, so I spent almost all of my time testing dropping in and avoiding the Gulag. With all settings on high and DirectX Raytracing enabled, the Aorus 15G hovered around a consistent 120 fps. Granted, that’s only half as fast as it would need to be to take advantage of the 240Hz display, but being able to hit that kind of performance on a portable laptop with ray tracing turned on is stunning.

Speaking of stunning, the display may only be FHD, but the Pantone color tuning looks fantastic. Colors are lifelike and not overly saturated, while shadows have a realistic shade to them that I enjoyed.

I also played Fortnite during testing, with the Aorus 15G hovering right around 100 fps, with an occasional jump to 130 fps on Epic settings.

I tried the same test with Warzone but found that performance dropped down to around 90 fps. My advice? Experiment with it and figure out which games and programs it boosts performance, and only use it then. There is a marked jump in performance, but as I saw, it appears it could hurt, too.

The cooling system is impressively efficient, with the GPU temp while playing Warzone staying around 80-degrees Celsius. What’s more, the top of the housing around the keyboard stayed cool to the touch after prolonged sessions. Normally there’s an area of the housing that gets hot to the touch, but the Aorus 15G didn’t even get warm.

The fans aren’t overly loud in standard mode, and you could get away with most gaming activities. However, as soon as the AI feature is turned on, the fans get loud enough you’ll want to find a decent pair of gaming headphones.

If you run into storage constraints or want more memory, you can easily remove the bottom cover and add either component. The 512GB SSD was enough for testing, but sure to fill up fast.

Gigabyte estimates the battery life of the 15G is up to 8 hours. Manufacturer estimates are often on the high side, and it’s no different with the 15G.

I ran the 15G through IGN’s movie rundown test, which consists of looping a video with the display brightness set to 50-percent, all unnecessary connectivity features turned off, and keyboard lighting disabled. The 15G lasted 263 minutes, which is good enough for the top spot when compared to other RTX 2070-equipped laptops.

Gigabyte takes a hands-off approach to preinstalled software, and it’s maybe too hands-off. The Aorus Control Center app was nowhere to be found on my review device, and without it, I was unable to use the AI tool, and had no idea the BIOS was also in need of an update. It wasn’t until I was troubleshooting an unrelated problem that I discovered Control Center was missing. After downloading and installing it from the Gigabyte website, I was able to update drivers, the BIOS, and even Control Center itself. Why it wasn’t pre-installed from the factory is a mystery, but it’s something to be aware of if you end up with the Aorus 15G or another Gigabyte laptop, for that matter.

Control Center is what you’ll use to customize the keyboard lighting, view system stats, and quickly toggle settings. The only task I’ve used it for, besides installing updates, is turning the Pantone screen setting on or off.

After installing Control Center, I was able to install AI: Enhance Gaming & Professional. That should be another program that’s installed from the factory.

Having said that, I appreciate the lack of bloatware and unnecessary apps, outside of what Microsoft bundles in Windows 10.