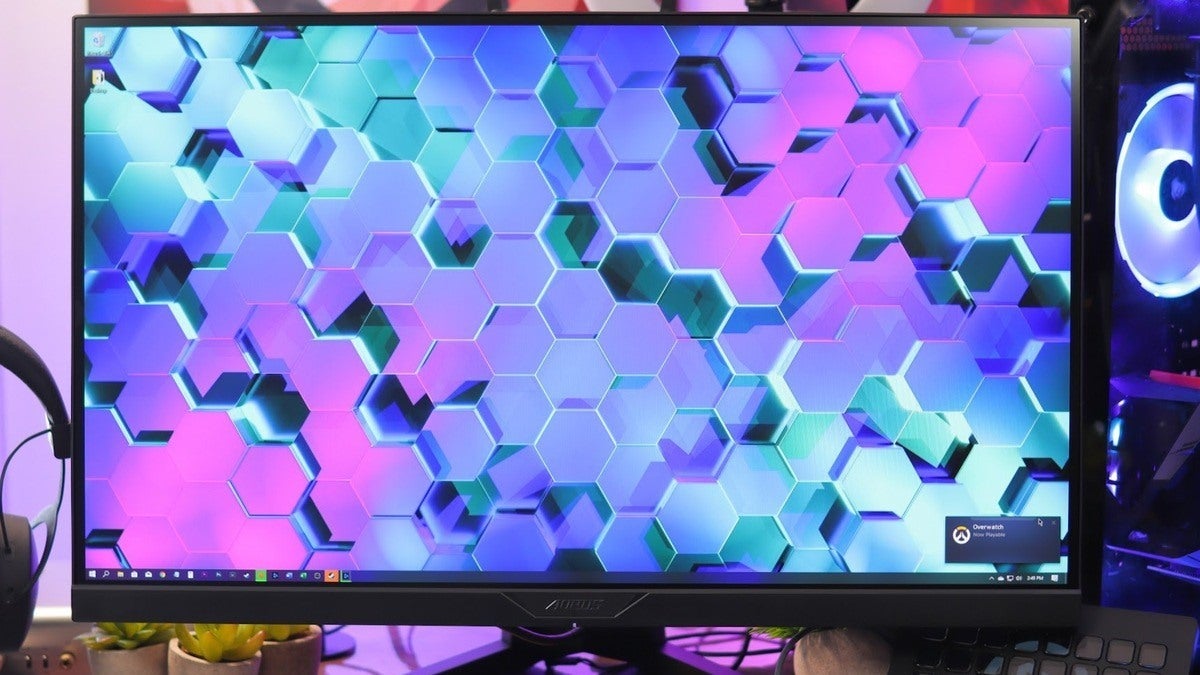 March 5, 2020 Off By tracy
Gigabyte came into the monitor market with a bang. The company has been big in the PC gaming scene for ages, but its first foray into gaming monitors, the AD27QD, challenged convention with game enhancing features the competition lacked. The company has had more than a year to refine and iterate, and today I’m looking at that monitor’s successor, the FI27Q. It features the same HDR-enabled, 1440p screen but has a boosted refresh rate with fewer sacrifices along the way. Is it worth the $499?

From the outside, the FI27Q looks identical to last year’s AD27QD. It features the same 27 inch flat panel with strikingly thin bezels and a wider chin. This makes the screen feel more spacious, which is great for gaming and especially good if you’re using more than one display. Nothing drags down a multi-monitor setup faster than thick bezels interrupting your game, so the FI27Q is a great fit for Nvidia Surround or AMD Eyefinity.

It’s a popular design, so it’s only when you turn the monitor around that it really looks unique. There’s not much room for it around the front, but the rear is awash in sci-fi styling – a mix of hard angles, gloss and matte finishes, and customizable RGB that looks stunning. You won’t see any of this once your monitor is turned around though, and even with a whopping 15 lighting presets, they’re not bright enough to project onto your wall. Gigabyte missed a great opportunity to add real backlight functionality, similar to Philips Ambilight.

The FI27Q also brings back the AD27QD’s excellent stand. It’s heavy and metal, so it never slid around on my desk, and offers a wide range of adjustments. You can pivot it 20 degrees either direction to share your screen with a friend, tilt it to use standing up, and adjust 130mm of height position it at eye level. If you’d rather use it vertically in a dual-monitor setup, it also rotates 90 degrees into portrait orientation. I’m a fan of it’s top handle which makes it easy to move and carry from place to place. If you’d rather mount the display on a monitor arm, the panel also supports VESA 100×100 mounting.

When it comes to video inputs, the FI27Q sports two HDMI 2.0 connections and one DisplayPort 1.2. This is an important distinction because Gigabyte also sells an upgraded version, the FI27Q-P, that upgrades the DisplayPort input to 1.4. The upgrade will cost you another $100, but dramatically improves the bandwidth and allows you to have full RGB, 10-bit color at 165Hz with HDR enabled. In other words, no sacrifices. The model we’re reviewing today forces you to use 4-2-2 chroma subsampling to get that full refresh rate.

With that said, as a successor to the AD27QD, the standard FI27Q is still a substantial improvement. Here, you’re given the option for 10-bit color all the way to 165Hz with the aforementioned chroma subsampling. The AD27QD limited you to 120Hz if you wanted full 10-bit color. The impact of subsampling on this panel is also very minor. Unless you’re viewing large text on a colored background, it’s going to be hard to spot. For gaming and browsing the web, I couldn’t make out any artifacts at all.

The FI27Q uses an IPS panel and offers great colors. It covers 95% of the DCI-P3 color space and can be beautifully vibrant to completely flat depending on your preference, making this monitor viable for professional photo editing. IPS panels are popular with creative professionals due to their excellent color accuracy, but, until recently, have been less so with gamers due to their slower response times. That’s not the case here, as the monitor features a 1ms response time similar to TN panels used in many esports monitors.

To see if it actually responded like a TN, I ran the FI27Q through Blur Busters’ UFO Ghosting Test. Unfortunately, this test showed clear examples of ghosting that were visible with the naked eye. Lagom’s LCD Test Pages showed a great response time, but again showed ghosting. I was able to reduce these by maxing out the monitor’s Overdrive setting, but that introduced its own artifacts that dragged down the whole image, so I quickly turned it back down again. Moving to the rest of Lagom’s test suite, the FI27Q fared well with solid out of the box gamma calibration and good black and white saturation.

The monitor also supports HDR content. It’s certified as DisplayHDR 400 and has a peak brightness of 400 nits. The ability to display 10-bit color at 165Hz really makes a difference here, and it was a relief not to have to choose between the full refresh rate and its full color gamut. Paired with the monitor’s naturally deep colors, this makes for beautifully rich visuals. The FI27Q isn’t the brightest gaming monitor and lacks extremely high-end features like full array dimming, but I found it to be plenty bright for normal sitting distance.

Like the other monitors in Gigabyte’s Aorus family, it also features Gigabyte’s suite of “tactical” features. These include things like Black Equalizer to help you peak into the shadows, Aim Stabilizer to reduce motion blur, and an on-screen reticle that you can customize with your own icon. The monitor also supports Active Noise Cancellation for your voice comms to cut out the background noise of loud roommates or cheering fans. Gigabyte also lets you pin system information to a corner of your screen, which is perfect for games that block on-screen displays like MSI Afterburner.

What makes all of this especially useful is that they can all be controlled with the company’s OSD Sidekick app. The FI27Q eliminates the need to dig around in menus using the control stick and instead makes adjustment easy. It also gives you the ability to tie features to hotkeys, which actually makes them viable to use in-game. Using a macro key, I was able to turn Black Equalizer on and off when I needed it instead of being forced to leave it on all the time or dig through an OSD.

The FI27Q delivers where it counts: high-intensity gaming. I was initially very worried that the ghosting I found in the UFO test would wreck my experience, but that turned out not to be the case. Playing Modern Warfare, I wasn’t able to make out any ghosting. I’m not sure if this is because of the extra on-screen action or that the synthetic tests make it especially apparent (or both), but I tried to make it ghost in every game I played and was never able to spot it. It was reassuring, but I’m not convinced it will never happen. The UFO Test made it clear: it can and will ghost under the right conditions. Since I never noticed it, though, it never dragged down my experience.

Playing at 165Hz is a glorious experience. If you’re gaming on a 60Hz monitor, you owe it to yourself to give it a try. Before testing a high refresh rate monitor, I always spend some time on my larger, 60Hz display first to get used to a “normal” gaming monitor again. Swapping back to the FI27Q, the smoothness was immediately noticeable, whether it’s running through a level, lining up an enemy, or even moving the mouse across the desktop. The extra refresh rate also cuts down on motion blur which makes picking out moving targets easier. I was able to jump back into Modern Warfare after weeks playing on console without missing a beat.

I also spent some time playing Doom in preparation for Eternal’s launch next month. Fast-paced games benefit the most from a speedy monitor and it was crystal clear here. I was reminded of my first time playing Call of Duty on the PS3 and experiencing 60 FPS gameplay for the first time, while most other games were still running at 30. Everything feels so much more responsive and fluid than a standard 60Hz monitor.

The only downside I experienced was with the monitor’s mic passthrough. My usual Discord friends commented about how tinny my voice sounded. Sure enough, checking into the microphones properties in Windows showed that it was locked to 16-bit, 16kHz. Windows labeled this “Tape Recorder” quality and sample recordings I made in Audacity confirmed it. If you’re planning on streaming or just care what you sound like, avoid the mic passthrough at all costs.

The Gigabyte Aorus FI27Q is available on Amazon and Newegg for $499.