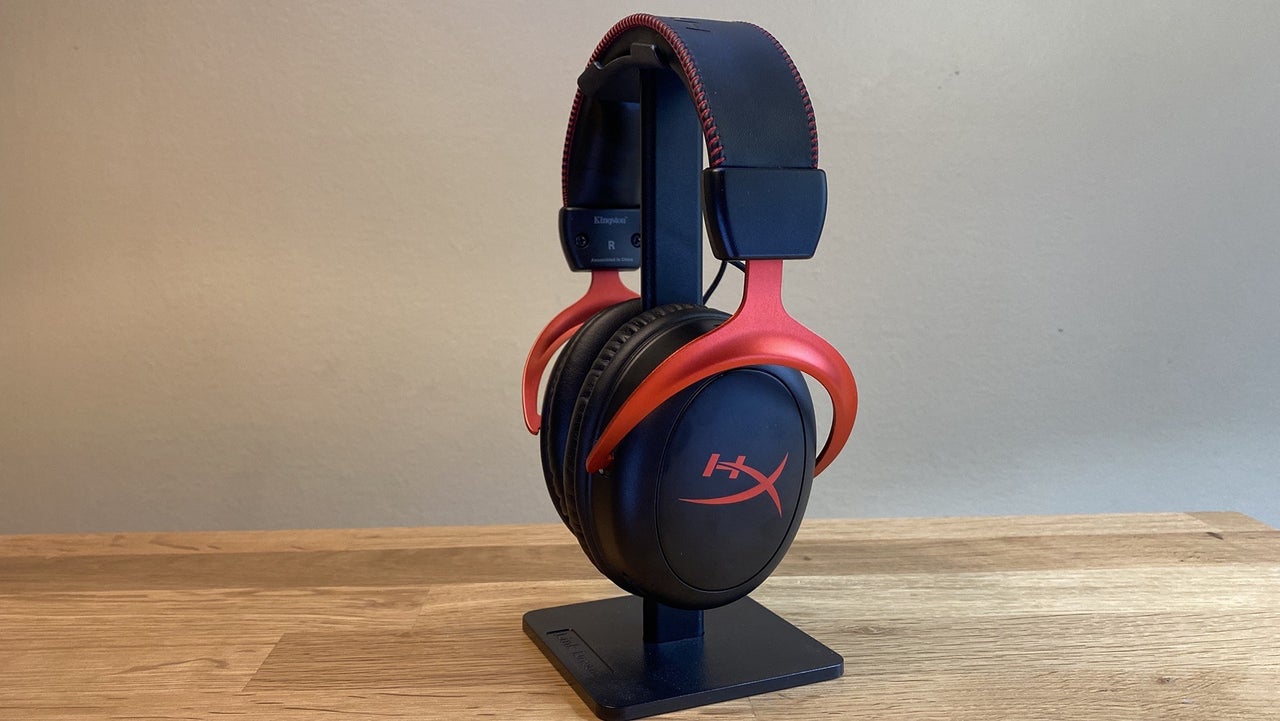 November 12, 2020 Off By tracy
HyperX’s popular, well-designed Cloud II is the latest of many gaming headsets getting a wireless refresh this year. The new model, the HyperX Cloud II Wireless, delivers the same great sound as its predecessor and premium features like virtual 7.1 surround sound. It’s also a great wireless specimen, thanks to a 2.4 GHz connection and impressive battery life. The HyperX Cloud II Wireless is a clear, comfortable option for getting high-quality audio out of your gaming PC, PS4 or PS5 and Nintendo Switch (in docked mode).

The standard HyperX Cloud II is extremely well-regarded, so you may not be surprised to hear that the wireless gaming headset doesn’t exactly rock the boat. In fact – if you compare it against the original HyperX Cloud II – the Wireless version looks identical, except the bottom of the left can is smooth, as there’s no cable sticking out. There are small changes here and there: The HyperX logo is now imprinted into the band, rather than stitched on, for example. But, for most people, the two headsets effectively look the same.

The headset’s black and ruby red design is still here, and it still looks bold. The leatherette-coated memory foam padding on the cups and top band feel soft on your head, even as the aluminum frame clamps enough to keep the headset in place – even when I shook my head like a lunatic to try and fling it off. Weighing in at 313 grams with the mic attached, it’s actually slightly lighter than the wired model, which is somewhat abnormal. (Most gear gets heavier when going wireless, thanks to the extra components). My one note, on this and many other headsets with metal forks, is that the cups don’t rotate to lay flat on your chest or a table.

Without the cable, on which the Cloud II includes a detachable DAC controller, the on-ear controls are a little more important this time around. HyperX keeps it simple: There’s a power button, a mic mute button, a USB-C port for the charging cable, and a plug for the detachable mic on the left cup. The speaker volume wheel is on the right. A lot of headsets try to squeeze everything on the left can but, in this case, I liked that volume control was easy to find in its own place.

The detachable microphone is a bi-directional cardioid condenser mic, similar to the wire mics found on all of HyperX’s gaming headsets. As with those mics, I found it generally easy to position precisely and well. For most gaming headsets, that’s all you can really ask for.

There are changes, of course – the usual things you’d expect from a headset design making the jump from wired to wireless. It’s just that the big ones are all internal. The Cloud II Wireless uses a 2.4 GHz wireless connection supplied via a relatively large USB dongle. The connection is strong and stable on PS4, PS5 and PC, even in a room with lots of signals adding potential interference. Doing our due diligence, I also tested the headset on the Xbox One X and the Xbox Series X, and confirmed it isn’t compatible with Xbox hardware.

The Cloud II Wireless also has a battery now, and it’s a pretty good one. According to HyperX, the headset should last up to 30 hours on a single charge, which is better than average. In some rough, anecdotal testing, I found the headset was able to last for nearly a week of regular use as my primary listening device. Consider me impressed.

On Windows, HyperX allows you to change a few minor settings on the Cloud II Wireless through its NGenuity configuration program. Using the software, you can adjust speaker and microphone volume, toggle its virtual 7.1 surround sound on and off, and toggle mic monitoring on and off. It also has a power-saving feature, allowing you to adjust how long the headset will stay on without any sound playing. (I believe it’s set to the shortest window, 10 minutes, by default, so I’d recommend adjusting that, at the very least). It’s a barebones software suite by 2020 standards, but that’s par for the course on any headset rated for consoles, where there’s rarely any software at all.

With little change inside or out, the HyperX Cloud II Wireless delivers excellent sound. It’s 53mm drivers push clear, precise sound across its 15Hz-20,000kHz range. Testing in the game Ghostrunner, I could hear every little whirr and hum in its synthy Cyberpunk-sounding soundtrack. The clang of my sword clashing to parry cyborg ninjas rang vibrant and bright every time.

Like the standard Cloud II, the Cloud II Wireless features virtual 7.1 surround sound to create positional audio in-game. In both Call of Duty: Modern Warfare and the Call of Duty: Black Ops Cold War beta, I could place the sound of gunfire coming from different directions accurately enough to rely on it in gameplay.

While the Cloud II Wireless has 7.1 surround sound and delivers strong positional audio, it doesn’t feature any kind of performance-oriented audio setting. These modes, which have become increasingly popular with mid- and high-end gaming headsets, recalibrate the audio to make gameplay-relevant sounds like footsteps louder and more detectable. Personally, I don’t miss it, as most of the versions I’ve tried tend to make games sound worse, but it’s worth noting its absence given the feature’s rising popularity.

HyperX’s reliable noise-cancelling wire mic captures chat audio clearly, as expected. I was able to communicate clearly with teammates in Call of Duty: Modern Warfare. And, to hear it for myself, I did some self-listening tests using Logitech Capture, which I use regularly to set up audio and video for Zoom and other video call services. Listening to short audio clips of myself, I found the mic captured my voice clearly and was easy to position.

The HyperX Cloud II Wireless will be available for $149.99 starting November 10, 2020, through HyperX and digital retailers.

CategoryHardware
Nvidia can’t be prepping an RTX 3060 with more VRAM than an RTX 3080, can it?
Call Of Duty: Black Ops Cold War Review – Mind Games And Motorized Mayhem