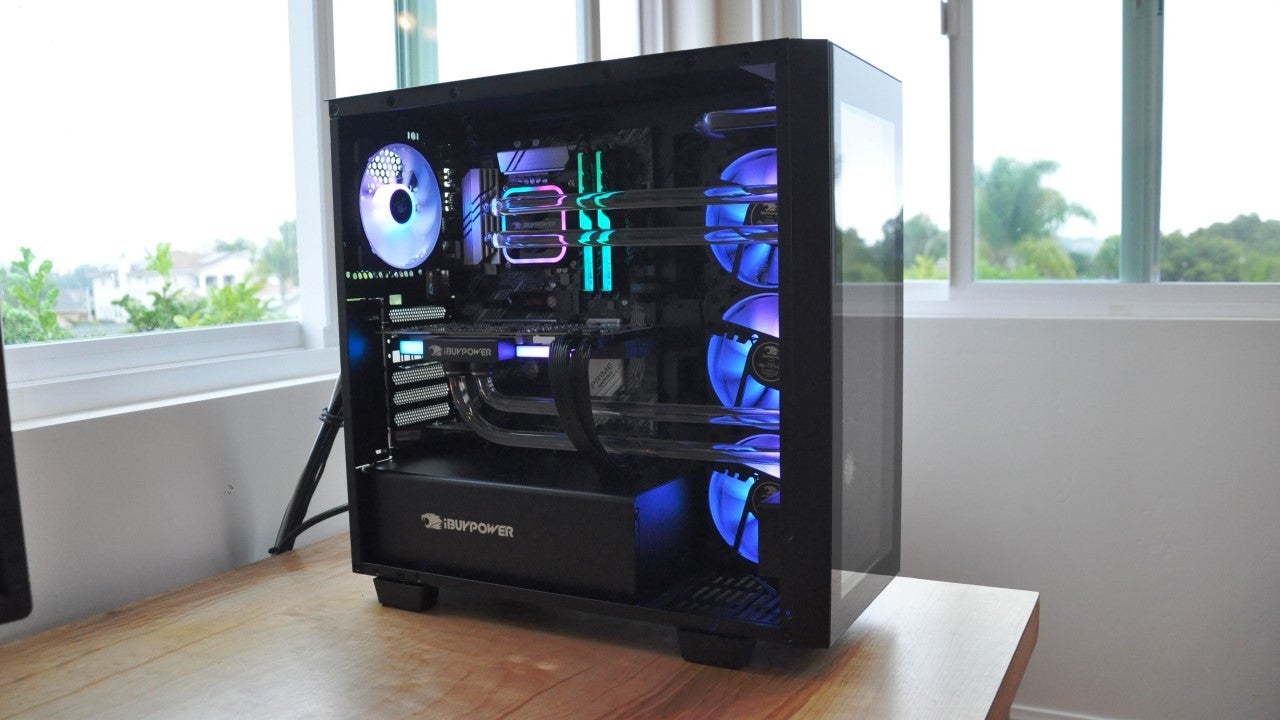 August 31, 2020 Off By tracy
With the rise of all-in-one liquid cooling units, it’s not uncommon to see prebuilt gaming PCs with water cooling inside. But iBuyPower’s Element CL takes things a step (or three) further, by building a custom, hardline water cooling loop into a plug-and-play system.There are a few different configurations for the Element CL, with the lowest-end model running about $1,599. We tested the high end Element CL Plus at $2,199, with these specs:

The non-Plus version of the Element CL downgrades the CPU to an i7-10700K, the RAM to 16GB, and the GPU to a 2070 Super, with Best Buy offering two similarly-tiered models that use slightly downgraded motherboards and SSDs.

The Element CL lives inside a steel case with tempered glass panels on the side and front, for a crystal-clear look at the badass hardware inside. The front glass panel is a window into iBuyPower’s custom D5-compatible reservoir, which takes up most of the 8×7-inch panel. The hardline tubing leads straight from their blocks to the reservoir with only one bend per tube. This, iBuyPower says, allows for a faster build time to keep costs down, as well as adjustability – so the company can fit different CPUs and GPUs into the system without having to re-bend the tubing. Custom fittings keep a strong grip on the tubing so it can be shipped without as much risk for leaks.

It’s a clever design, though it comes with some small sacrifices. For example, iBuyPower is using aluminum blocks instead of copper, which does limit the cooling effectiveness compared to a system you could build yourself (more on this later). The pump was rather quiet unless under full load, though fans were rather loud at their default settings. The BIOS allows you to tweak the fan curve to your preferences, provided you’re willing to sacrifice a bit of cooling potential. I found the fan configuration a bit confusing, though – the pump was plugged into the CPU FAN header and the four fans were connected to a daughter board that split them among two headers – the bottom two radiator fans on one CHA FAN header, the top radiator fan and rear exhaust on another CHA FAN header. This didn’t seem to be listed anywhere in the paperwork I was given, which may lead to some confusion for users that want to adjust the fan curves themselves.

From the reservoir, water feeds into a 360mm radiator against the right side panel, with three RGB intake fans attached in a pull configuration. The fans draw fresh air from outside the case through a mesh on the right side panel, heading through a fan filter before blowing through the radiator and into the case. A single 120mm fan at the rear of the case acts as exhaust, for fairly positive air pressure inside the case. Traditionally, positive air pressure means less dust as long as you have filters on the intake fans, though in this case the filter is inside the case, between the side panel and the radiator. This feels like a slightly strange decision, since it does allow dust to get into the case before it reaches the filter. In theory, it should still prevent most dust from making it into the main chamber of the PC, but it is a bit unorthodox, and you will have to remove the side panel for occasional cleaning. There’s also a dust filter along the bottom, preventing dust from getting into the bottom-mounted PSU, and a dust filter along the top vent, where you can mount up to two extra fans if you feel the need.

Like most iBuyPower prebuilts, you can swap many of the components yourself, although the CPU and GPU are more limited in their upgradability, since their water blocks are only designed for the specific components offered on Element CL rigs. Most Intel CPUs are available, but graphics are currently limited to only the RTX 2070 Super and 2080 Super. This highlights the main challenge of a system like this: finding the right audience. As much as PC builders may scoff at prebuilt systems, they have a place. I love building PCs, but I know that some people would prefer to be up and gaming without the hassle (I like eating cake, for example, but I don’t love baking). Water cooling, though, does require a tad more maintenance, and simple upgrades like a CPU swap become much more complex when you have to drain the loop and deal with the intricacies of hardline tubing. iBuyPower has made loop maintenance pretty easy, with dedicated fill and drain ports available behind the front panel, but it is one more thing the user will have to think about over the course of the PC’s life. If you plan on buying a PC and keeping it as-is for as long as possible, this is a pretty solid way to get hardline water cooling without the work. Just know that it comes with added complexity, and upgrades are a bit more limited than other rigs.

The rest of the computer is well-built. Cable management is solid, with most cables routed through the proper holes and excess cables hidden under the power supply shroud with zip ties. The power supply is from a lesser-known brand called High Power, and I can’t speak to this specific model – though the brand has received good-but-not-glowing words from the experts at jonnyGURU.com, which is good enough for me. It isn’t modular, hence the rat’s nest under the shroud, but there are enough free molex and SATA cables to add more peripherals if you want. The case even has two 2.5-inch drive mounts behind the motherboard if you need extra storage. The fans, water blocks, and RAM are all RGB, with controls available through ASUS’ bundled software. They do the typical rainbow breathing out of the box, but as always, RGB’s real power is in setting it to a very specific color to match the rest of your gear, and I was able to dial in the perfect shade of royal blue to match my keyboard.

All this comes in a very well-packed box with plenty of soft foam inside and outside the case to prevent damage during shipping, and fittings showed no signs of leakage on my review unit. The Element CL also comes with iBuyPower’s Ares M1 membrane gaming keyboard and Zeus E2 mouse – both usable, but nothing to write home about, and they feel a bit like throwaways next to a PC this high-end. If you don’t already have a mouse and keyboard, I suppose they’d work fine as stand-ins while you save up for a fancier model.

We test every machine that comes through our proverbial halls using a number of benchmarks, as well as your run-of-the-mill gaming sessions to see how they perform. Before doing so, however, I toured the BIOS to double check iBuyPower’s out-of-the-box settings. While they did enable XMP to ensure buyers receive the advertised RAM speeds – not always a given these days – the review unit we received in July was running a very old BIOS revision from March, and for some reason the CPU wouldn’t boost properly to Intel’s recommended spec. After clearing the BIOS settings and updating to the latest version, everything seemed to run properly, but it’s one of those things I feel like iBuyPower should have noticed and corrected before shipping, given they claim each unit is individually benchmarked by staff. Many typical users won’t go tweaking the BIOS themselves, which is a problem if they aren’t getting the promised performance out of the box. iBuyPower tells me the BIOS should have been updated before getting to me, though I also know this isn’t the first time they’ve shipped systems with outdated BIOS revisions.

Windows itself also needed an update to the latest 2004, but that was easy enough to do, and Windows automatically downloaded the latest version of Nvidia’s graphics drivers on first boot. Once I got my house in order, I ran a number of benchmarks to see how this bad boy handled heavy workloads.

Benchmarks like this are designed to stress the system as much as possible, meaning they aren’t always indicative of actual in-game performance – still, these are some pretty impressive numbers, with frame rates higher than 60fps on just about anything you’d run at 1080p. This is perfect for fast-paced games like Doom Eternal or Overwatch, especially if you have a monitor that can refresh quickly enough to keep up. Since this is such a high-end system, I also ran our usual benchmarks at 4K with ray tracing turned on (when applicable), producing frame rates in the 30s and 40s.

That’s not bad given the load this system is under, but I also wanted to run some more typical gaming sessions, especially at 4K, and I was very pleased with how it performed. With ray tracing turned off and all other settings maxed out, my time playing Shadow of the Tomb Raider hovered mostly around 70-90 FPS at 4K, making for incredibly detailed graphics and pleasantly smooth motion (provided you have a G-Sync capable display). With the exception of RTX, I rarely felt like I had to fiddle with graphics settings to find a good balance in a game – I could just crank everything up and go.

Given that this system boasts a custom water cooling loop, cooling is an important piece of the puzzle. In my 25° C office, idle temperatures hovered around 32° C on the CPU. Prime95’s Small FFT test spiked the CPU to 85° C on the hottest core, though that lasted less than a minute – the i9-10900K allows for 250W of power for that initial boost, before backing down to 125W for longer, sustained workloads. After the system backed down to 125W, temperatures kept steady at 62° C on the hottest CPU core. My office is warmer than many rooms, so to compare apples to apples, that’s about 7° C over ambient at idle, and 37° C over ambient at load. That’s certainly not bad, and noticeably better than many reviewers saw on the i9-10900K at launch with AIO coolers. GPU temperatures were similar, with the chip reaching 59° C (or 34° C over ambient) at its hottest moments during a full load.

You could probably get both components even cooler with a fully custom loop using copper blocks, but as I mentioned earlier, iBuyPower made these compromises knowingly, and ultimately the build strikes a good balance between cooling and aesthetics, while still being easy enough to produce and ship at a reasonable price.

And yes, I do mean “reasonable.” It’s pricey, and it’s certainly not a “bang for your buck” PC given the top-tier hardware inside (or almost top-tier, given that Nvidia’s 3000 series is just around the corner). But it’s actually very well priced for what you get. By my count, a computer with the same components would cost around $2,200 to build yourself – the same price as the Element CL plus – and that’s without the custom water cooling. (Part of this price is likely due to surging prices on components right now, with Intel’s i9-10900K being sold for more than MSRP at the moment.) Eschewing the Windows license and considering bottom-of-the-barrel fans, RAM, SSDs, and PSUs (not advisable) could get you as low as $1,800 for these specs – again, without the water cooling. So for the hardware inside, the price tag is remarkably enticing.

CategoryHardware
Gamescom 2020 Highlights: The Biggest Game Announcements, Trailers, and Gameplay
Give your graphics card the attention it deserves with this PC vanity mirror