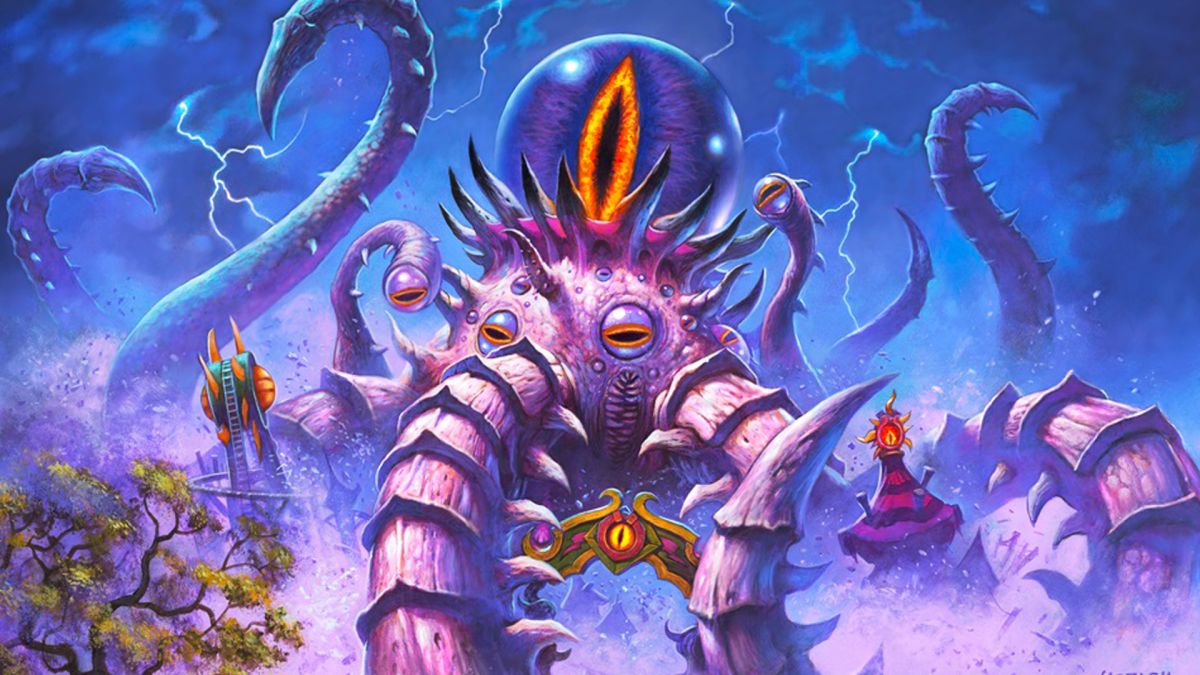 I’m gutted that C’Thun, the Shattered is the weakest of Hearthstone’s Old Gods

The last couple of years have served as a reunion for Hearthstone characters. Last year, the Rise of Shadows and Saviors of Uldum expansions reintroduced the League of E.V.I.L. with a villainous new plot that prompted the return of the League of Explorers. We saw old favourites like Brann Bronzebeard, Reno Jackson, and even King Togwaggle dive back into Standard play, this time with powerful new abilities that have solidified their spots in the meta. In 2020, we even saw Illidan Stormrage rise from a lacklustre Legendary that had previously been nerfed into exile, to a fully fledged tenth class.

Set: Madness at the Darkmoon Faire.

Continuing the trend, Blizzard announced that we’d be welcoming back the Old Gods to round off the Year of the Phoenix with the Madness at the Darkmoon Faire expansion. All four ancient monstrosities are back with reimagined abilities, but I was most excited to be reunited with C’Thun. 2020’s C’Thun, the Shattered has a new Start of Game effect that causes it to break into four five-Mana spells that are shuffled into your deck. After playing all four, C’Thun itself slides into your deck and, for 10 Mana, it’ll deal 30 damage that’s randomly split among all enemies.

Similar to the other returning characters, C’Thun, the Shattered’s ability gives a little nod to its former effect. C’Thun may not have been in Tier 1 decks when the Whispers of the Old Gods set was in Standard, but it was the star of the expansion. Players received the neutral Legendary as a freebie after opening a Whispers pack, and its support cards were largely rares and commons, which were cheap to craft. Best of all, its decks had a clear strategy that was easy to follow. Luckily for me, it also won games consistently in the low ranks, which is where I was cutting my teeth at the time.

Over the course of the game, I’d play minions that would buff C’Thun, and as a Priest, my deck was peppered with healing cards to keep me alive until the late game. For 10 Mana I’d then slam a hefty C’Thun onto the board to watch it split its damage between the enemies on the other side. This explosive finisher usually concluded the match, but if it wasn’t quite up to the job I’d simply play a Doomcaller to shuffle it back into my deck.

Set: Whispers of the Old Gods.

It’s fair to say that C’Thun has always played a slow game of Hearthstone, but I fear that the new version is too slow to feel truly competitive. Upon Darkmoon Faire’s launch, my first instinct was to try a C’Thun Rogue build. The new key to winning with  this card is to play its spells as quickly as possible, but even with Rogue’s ability to draw cards at speed, I can’t keep up with my opponents.

I turned to Control Warrior next—an archetype I usually try to avoid—and while I could outlive others using the tools that line the rest of my deck, my beloved Old God refused to make an appearance in my matches. I’d either draw its spells too slowly, or the game would end before I could actually find and play C’Thun. What’s worse is that C’Thun’s spells (aptly named after parts of its body) don’t always feel like a valuable play for five Mana.

I’ve found that Body of C’Thun (summon a 6/6 minion with Taunt) and Heart of C’Thun (deal three damage to all minions) can be helpful in keeping me alive. However, the remaining spells rarely make a dent in my opponent’s side of the board from turn five onwards. These spells are just too expensive for the effects they offer, and knowing that there are four weighing down my deck makes the game too much of a slog. Granted, the entire point of these body parts is to creep towards dealing 30 damage to my opponent, but that promise is rarely fulfilled.

My problem with C’Thun, the Shattered still boils down to the fact that I rarely even draw the 10-Mana finisher, though. Even carefully stacking my No Minion Mage deck with spells like Arcane Intellect and Incanter’s Flow, to reduce the cost of my spells, and draw them faster hasn’t helped. I’m not alone in my struggle to make C’Thun work in a competitive Hearthstone deck, either. This has been an ongoing discussion on Reddit over the past week.

While I now have a few new builds to test out thanks to the r/CompetitiveHS community, I can’t help but feel a little disappointed by C’Thun, the Shattered’s weak entrance. I was looking forward to reliving the glorious 30-damage finisher, but I’m not sold on this new version of one of my favourite cards. I admit that my memories of 2016 C’Thun are likely impaired by rose-tinted goggles but C’Thun, the Shattered is not a good card in its current state. Here’s hoping it sees some tweaks that’ll allow it to find its place in the meta in future.