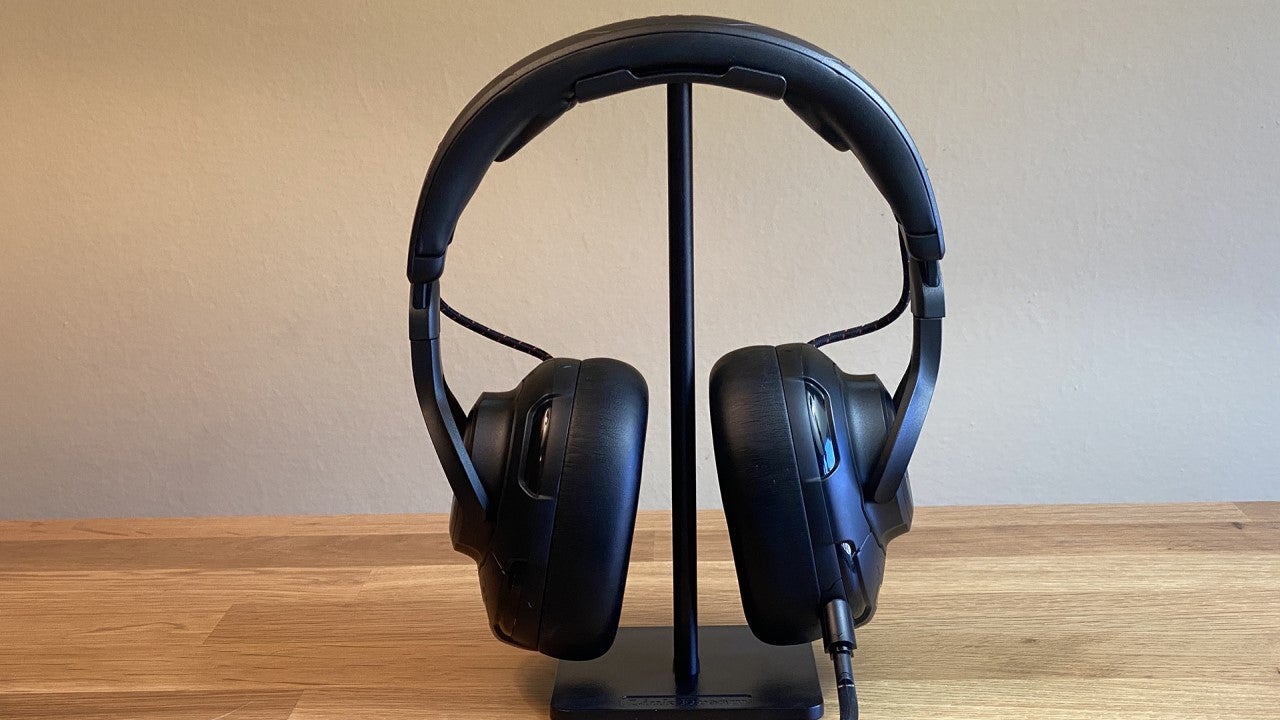 April 28, 2020 Off By tracy
JBL is finally getting into the gaming business. The longtime speaker manufacturer will launch its “Quantum” line of gaming audio gear this spring, including seven gaming headsets at various price points, and a desktop speaker set. At the top of the heap, the Quantum One shows that it has what it takes to compete and excel as a headset-maker. Pumping out a quality sound and delivering top-of-the-line bells and whistles like head-tracking and active noise canceling, the Quantum One shows that JBL knows exactly how to calibrate its audio expertise for gaming.

The Quantum One’s headset design splits the difference between “gamer” style and traditional, minimalist audio look to create a synthy soft-cyberpunk aesthetic. Though the body is made from molded black plastic, the Quantum has colorful accents scattered all over – a bright orange “R” and “L” painted on the fabric in the earcups and a three-part RGB lighting scheme on the sides of the cans.

It also has a solid fit, if a bit on the loose side. The top band is pretty wide, so while there is some pressure keeping the headset in place, it doesn’t feel like you’re getting squeezed. Though it was a great fit for me, I could also see it feeling a bit loose on smaller heads. Both the top band and earcups are well padded with leatherette-covered synthetic memory foam cushioning: Though it looks like it should be heavy, the 369 grams never weighed me down.

Looking closer at the cans, there are a lot of inputs and I/O. Everything is on the left side, including a robust suite of on-set controls: Mic mute button, a volume dial, a quick head-tracking recalibration button, and a “talk through” button to disable the active noise canceling. You also have the ports for the mic, a 3.5mm jack for a direct connection on consoles, and a USB-C port for connecting via USB, which you’ll need to use the head-tracking. The USB-C to USB-A cable also features a simple chat/game-audio mixer, which comes in handy when calibrating audio in multiplayer.

Speaking of which, the Quantum One’s active noise-canceling feels like a huge upgrade, even if it isn’t new or innovative technology. Active Noise Canceling, which plays a low-frequency tone to block ambient sound, is relatively common in high-end headphones, but rarely finds its way into gaming headsets. It should, though: Blocking outside noise makes it easier to hear the nuances of the sound of a game (or music, or Netflix). Even when playing alone in a quiet room, it blocked the sound of my PC’s or console’s fans: I didn’t realize how distracting that sound could be until I worked for a week without hearing it.

Inside the cans, the Quantum One sports 50mm drivers, which deliver a polished, sharp sound. There are specs that support this, in theory, though I’d argue there isn’t any one element that directly translates to a better sound: At 114 dB, the Quantum One has a higher sensitivity than the average headset, which means it’s coming in louder (and possibly clearer) even at lower volume. It has the same 20-40,000Hz “Hi-Res” frequency response that you tend to find in high-end headphones, but rarely in gaming headsets. These are strong indicators of quality, but ultimately the proof is in the sound. Where many headsets, even good ones, come in a bit bassy and can get a little fuzzy when there’s too much going on, everything that comes through the Quantum One feels balanced and clear.

Maybe the one real low point on the Quantum One is its detachable microphone. The short, bendable boom is covered with a rubbery plastic that doesn’t feel like a high-grade product. It works fine, but it’s just fine. I generally have a hard time getting a headset mic right where I want it, but it can be especially tough to find the best placement with the Quantum One mic because you don’t have much bendable arm to work with.

JBL created a new configuration app, QuantumEngine, for its Quantum line of gaming headsets. The app allows you to adjust the audio mix in the headphones, and save custom audio profiles, in addition to the pre-made settings available out of the box. For the Quantum One, the app is essential, as it allows you to calibrate the headset’s head-tracking and spatial audio, and configure the RGB lighting on the cups.

QuantumEngine looks clean and is easy to navigate. The areas of customization are clearly broken down, and each category fits on a single panel. And yet there are a surprisingly large number of settings to tweak. When looking at the Sphere360 spatial audio, you can adjust virtual speaker positions, your body height and head diameter to perfect how the simulated sound hits you. Where most headsets with RGB lighting have a single glowing element, the Quantum has three customizable areas which can be set to follow many of the same patterns found on keyboards and mice.

That said, JBL is clearly still working some of the kinks out of the software. For much of my testing, the head-tracking seemed to lose track of its alignment very easily. This seems to have been fixed with a recent patch, but I still find it needs to be calibrated on startup. It’s very easy to calibrate and only takes a moment, but having to take that step every time feels like an imposition.

The most important thing about any gaming headset is how it sounds. Over the course of a few weeks, I tested the Quantum One with a few games across PC, Xbox One, and PS4, including Call of Duty: Modern Warfare, Doom Eternal, Teamfight Tactics, Ori and The Will of The Wisps, and Nioh 2.

In general, the Quantum One outputs clear, nuanced soundscapes. The bass booms. The mids sing. The highs whine. Even when using a direct 3.5mm connection, which does not allow for 7.1 surround sound or head-tracking, you hear a complete version of the music and sound effects that you may not get on cheaper audio gear (like your TV’s speakers). You get most out of the difference in sound quality, I think, in a game like Doom Eternal, where you really want to hear every guitar lick, but also need to clearly pick up the crackling sound of a fireball whizzing towards your head.

The surround sound, particularly when combined with the spatial audio and head-tracking software on PC, is very precise. You can follow an enemy’s movements in Modern Warfare by following their footsteps. It’s particularly cool to notice how the sound positions to match your head movements IRL. Saying that these features work exactly as they’re supposed to doesn’t necessarily sound like high praise, but it is. Stable, reliable positional audio builds immersion in a subtle, but also amazing way.

The JBL Quantum One gaming headset will be available at major electronics retailers for $299 starting May 4, 2020.