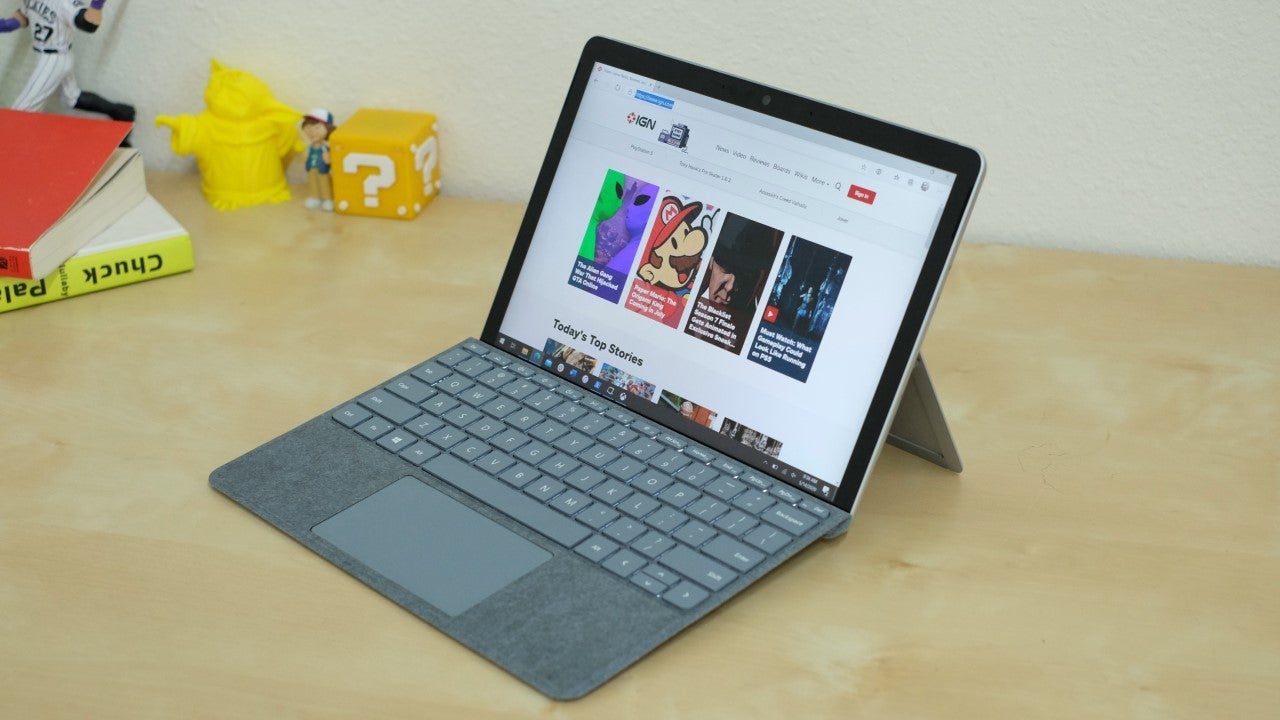 May 18, 2020 Off By tracy
Let’s get this out of the way right now: Microsoft’s new Surface Go 2 isn’t a gaming laptop. Even though I can dream of how much fun it’d be to drop in on Warzone or Apex Legends on the Go 2, it’s just not meant for that. It’s designed with students and mobile – er, remote workers – of all ages in mind. Its crisp display, ultra-portable design, and detachable keyboard make it a versatile 2-in-1, indeed.


For the last week or so I’ve been testing the Go 2, using it as a tablet and laptop replacement, triaging emails, writing far too much, and catching my favorite Twitch streams. I’ve tried gaming on it, too, and while the results weren’t always what I wanted, it is possible to do some.

There are four configurations of the Surface Go 2, ranging in price from $399 to $729. The main component differences boil down to processor, memory, and storage. Oh, and at the high-end, you’ll get LTE connectivity.

Here are the specifications of the $729 Surface Go 2 I’ve been testing:

That’s just for the Go 2 itself. The Type Cover keyboard and trackpad combo adds $129 to the overall cost.

If you’re having a hard time telling the Surface Go 2 apart from the Surface Go, you’re not alone. With the exception of a slightly larger display, the two devices are identical in design. In fact, they’re even the same exact size, meaning if you’re upgrading from the original Go and you already have a Type Cover or a case, it’ll work with the Go 2.

The 10.5-inch PixelSense display is a half-inch larger than the previous model. Microsoft shrunk the bezels and moved some parts around inside to make room for the larger screen. The end result is a device that measures 9.65 x 6.9 x 0.33-inches and weighs just 1.2 pounds (1.22 pounds for the LTE model).

Centered above the screen is a 5-megapixel 1080p camera, along with all the necessary components to enable Windows Hello facial recognition for signing into the Go 2. There’s an 8-megapixel camera on the back as well.

On the right side of the Go 2 are the Surface Connect port, a USB-C port, and the 3.5mm headphone jack. Microsoft’s proprietary Connect port is used to charge the Go 2 with the included 24W power supply, as well as connect Microsoft accessories to the Go 2 – like the Surface Dock.

On the left side is the SIM card tray. Along the top of the Go 2 is the power button, along with volume rocker.

A kickstand folds out from the back of the housing, revealing the microSD card reader on the right side. The kickstand allows for multiple viewing angles, including placing the Go 2 far enough back that it’s comfortable to write or sketch on with the Surface Pen. I didn’t have a Pen to test with, but I can say that the viewing angle makes it easy to glance over at a document or streaming video while working.

On the bottom of the Go 2 is the Surface Type Cover port that connects the optional keyboard with trackpad accessory to the Go 2. The Type Cover magnetically snaps into place when it gets close, eliminating the need for precise alignment on your part.

When connected, the keyboard is backlit, sits at an ergonomic typing angle, and converts the Go 2 into a laptop. I liked typing on the Type Cover. The keys are evenly spaced, albeit somewhat cramped due to the overall size of the Go 2, but after a few minutes of adjustment, I was able to type without issue.

Overall, I really dig the design of the Go 2. I never had a chance to use the original Go, but the smaller form factor and easy transition from tablet to laptop and back around the home is one that I think a lot of us can relate to.

Out of the box, the Go 2 runs Windows 10 in S Mode. Essentially, S Mode is a streamlined version of Windows 10 that limits the installation of apps to those from the Microsoft Store and limits you to using only the Edge browser. The promise of such limitations, at least from Microsoft, is peace of mind on the security front, and better performance.

For some users, Edge and apps from the Microsoft Store will be more than sufficient. However, I found that even though I had installed apps from the Store in S Mode, not everything worked as it should. For example, the Twitter app Tweeten installed without issue, but after opening it, I clicked on the button to connect my Twitter account, and nothing happened. I uninstalled, reinstalled, tried again and still, nothing.

Another oddity was repeatedly being prompted by Edge to set it as my default browser, even though it’s not possible to use another browser while in S Mode. The option to set a default browser simply doesn’t exist.

I tested the Go 2 in S Mode for a couple of days – and as you’ll see below, battery life was better – but, for me at least, I needed to have the full experience of Windows 10. Thankfully, you only have to click a couple of buttons to switch out of S Mode to the full-fat version of Windows 10. Just be sure that’s what you want to do – it’s a permanent and one-way change. You can’t go back to S Mode. And, yes, after switching out of S Mode, I was able to sign into Tweeten.

Outside of S Mode, there’s nothing special or overbearing about what comes preinstalled on the Go 2. Microsoft’s Surface app shows specifications and support details. It’s nothing you’ll use on a regular basis.

Inside the review unit I received is Intel’s 8th Generation Core m3-8100Y, 8GB of DDR3 memory, 128 GB SSD, and LTE connectivity. With eSIM support you don’t have to worry about fussing with the SIM card tray or getting an extra card from your provider – you can sign up for service directly on the Go 2 and ditch your Wi-Fi connection whenever necessary.

To be clear, the unit I’ve been testing is Microsoft’s top-of-the-line model. For $100 less, you can ditch LTE, but keep the rest of the internals.

I ran our usual set of benchmark tests on the Go 2 just to be thorough, and the results aren’t pretty when compared to far more powerful processors and Nvidia’s latest GPUs. So instead of unfairly comparing them in a spreadsheet, here they are:

From a gaming point of view, those numbers are horrible. But, again, this isn’t a gaming device.

Of course, I still tried to game. I installed Roblox, Minecraft, Forza Street, and Modern Combat 5 before leaving S Mode. Roblox and Minecraft were playable, with no sluggishness or performance issues running at a steady 30fps. Forza and Modern Combat played and felt more like a mobile game, with the latter requiring me to use touch controls to work through missions.

After leaving S Mode, I installed the Xbox Game Pass for PC beta and downloaded some games. I started with Gears Tactics, which installed just fine, but the moment I tried to launch it I was greeted with a message saying the GPU stopped responding.

I backed off the hardcore games and gave Overcooked 2, Moving Out, and Astroneer a shot. The first two games run at 30 fps and are actually quite a bit of fun, while Astroneer never got above 4 fps.

Outside of gaming, the Go 2 has handled every common computing task I’ve thrown at it. Be it managing my inbox in the Mail app, chatting with coworkers in Slack, or bouncing between far too many tabs in Edge. There were times when I would have to wait for the Go 2 to catch up with me, like when using Alt-Tab to quickly switch between apps or swiping across the trackpad to multitask.

Performance is sufficient, but not going to blow you away, and certainly nothing you want to rely on for heavy photo or video editing.

Battery life has been a mixed experience. Using the Surface Go 2 as my main laptop, I was able to get through most of a workday, right around 7 hours, before I had to plug it back in. That’s with mixed usage, and adjusting display brightness throughout the day.

Putting it through our battery life benchmark, which consists of looping the same video in VLC with the display set to 50% brightness, keyboard backlight turned off, Wi-Fi enabled, and Bluetooth, cellular and location disabled, we failed to reach the 10-hour mark Microsoft advertises.

Moral of the story? For best battery life when watching a movie, disconnect the keyboard.

There are four Surface Go 2 configurations, ranging in price from $399 for an Intel Pentium Gold 4425Y processor, 4GB of memory and 64GB of eMMC storage up to $729 for an Intel Core m3 CPU, 8GB memory and an 128GB SSD. The Type Cover keyboard costs an additional $129. It’s available at Amazon or direct from Microsoft.