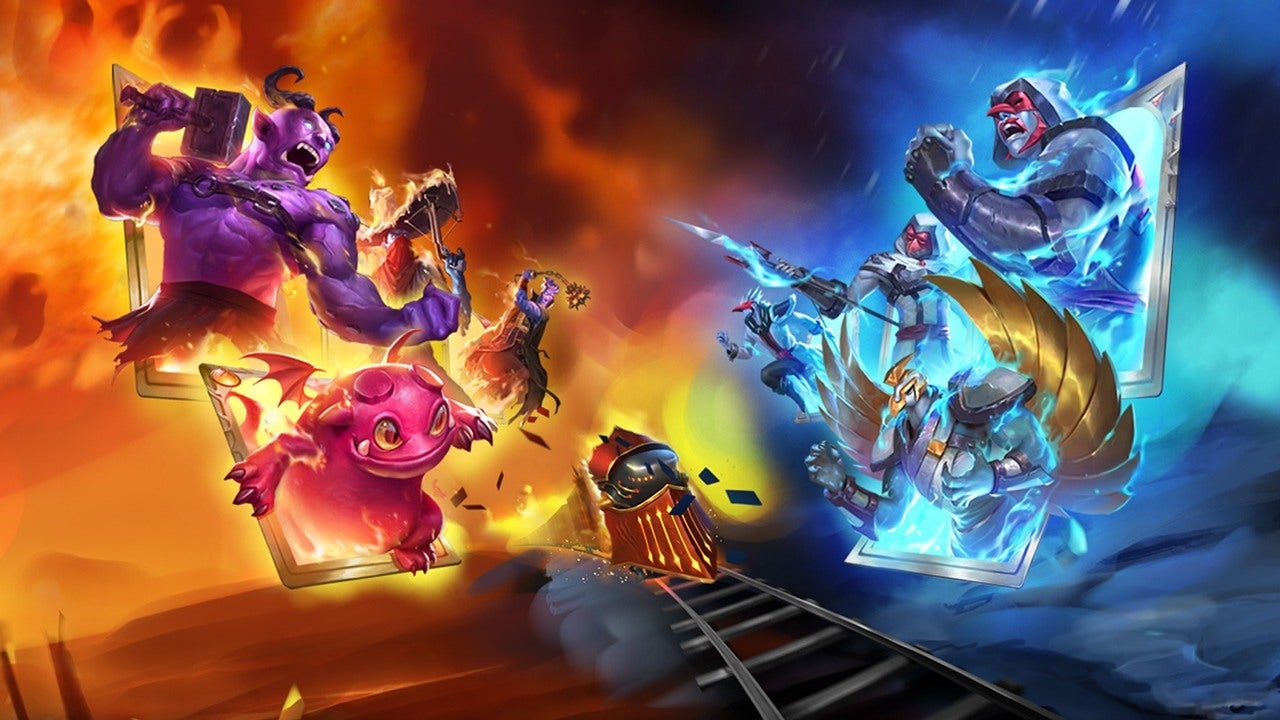 When my wife first saw me playing Monster Train she thought I’d gotten hooked on Slay The Spire again and she’d have to put up with another stretch of me playing it incessantly. I had good news and bad news for her: the good news is that, despite also being a colorful and cartoony game in which you pick new cards and modifier items after every fight to improve your deck, and then spend energy to use those cards in turn-based battle, Monster Train is a very different take on the deck-building roguelike idea. The bad news (again, for her, not for Monster Train) is that it’s every bit as fantastically deep, dynamic, and replayable, and it’s kept me just as engrossed as Slay The Spire ever did.

The most obvious difference is that instead of having just one character attacking and casting spells, Monster Train puts you in command of many creatures – and they can be summoned onto the first three of your train’s four floors to create an increasingly complex gauntlet for enemies to run through on their way to attack its power source at the top. Why does a train have four floors? That’s… unclear, as trains are traditionally laid out horizontally. But Monster Train has some very odd lore around it about a quest to restart the fires of Hell that provides some crazy, colorful backdrops for its battles and successfully handwaves away any sort of questions – such as “Why is Hell good and Heaven bad now?” – as not important anyway.

Variety is king in a game like this, and it’s impressive how differently each of Monster Train’s five decks play. The Hellhorned demons are hard-hitting creatures who build up rage to increase their attack power even more; the Melting Remnant relies on cheap, temporary units made of wax that burn out and die after a set number of turns but can be revived even stronger; the ghoulish Umbra depend on summoning and consuming creatures called morsels to strengthen others; Awoken uses a lot of retaliatory spikes and health regeneration on their plant-based units; and the aquatic Stygian Guard specializes in spells and damage over time.

The five decks’ gameplay differences do a fantastic job of changing up the rules.

All of the monsters are designed in Monster Train’s detailed and cartoony art style that mixes the cheerful and the grotesque, and the mismatched hodgepodge of characters is just fun to look at. (Plus, all the shops along the way are run by weird cats, some of whom appear to be cyborgs.) More importantly, their gameplay differences do a fantastic job of changing up the rules and injecting new variety, based not only on your main deck – which determines which upgradable champion character you get to summon for free at the start of each match – but on your secondary deck as well.

Because you pick two of those decks to play on each run, right there you have 10 different combinations you can use (many more if you include the fact that swapping the main and secondary will change which champion you’ll use, and you have the option to choose between two champions for each main deck), each with wildly different synergies between their abilities. You can, for example, feed morsels to demons to make them stronger or use the Melting Remant’s revival abilities on any other faction’s units, creating combos so powerful they seem broken – at first. Every time you defeat the final boss (a successful run takes around an hour) the challenge ramps up (unless you don’t want it to), to the point where anything less than a super-powered build will give you a snowball’s chance in Hell. The more I experimented and learned, the more I was rewarded with a nuanced understanding of how to maximize a deck’s potential.

Each deck combo has wildly different synergies between their abilities.

Monster Train does lean a bit harder on randomness than Slay The Spire in that even most of your starter deck is randomized on each run and your chosen champion’s upgrade path is narrowed to two of their three overall possibilities. That can be a little frustrating in that it occasionally results in a run where I feel the odds are unfairly stacked against me, but it also means that sometimes I unexpectedly come back from what appeared to be a bad situation.You can usually make lemonade out of lemons if you think carefully about which of the random selections of cards and artifacts you’re presented with to choose, as well as the simple either-or choices of which of two tracks to take on the overworld map that’ll take you, for example, either a unit upgrade shop, a health pick-up, and a random new artifact or a spell upgrade shop, a free new modifier artifact, and the opportunity to duplicate any card other than your champion. These choices can dramatically change how you play and force you to change your plans and adapt, or pivot to a new opportunity you hadn’t anticipated instead of following the same playbook each time.

These choices can dramatically change how you play and force you to adapt.

Even the very first artifact you choose from the two options presented will have immediate and far-reaching effects that define your run. Maybe your four Train Stewards (basic, torch-headed soldiers every deck gets by default) are suddenly made much more powerful; Maybe enemies take damage every time they progress from one floor to the next, effectively negating basic units; Maybe you get +7 action points on your first turn, so you can build your deck to summon extremely powerful units if you draw them on that round. There are dozens of these options to find, and many are literal game-changers.

All 2021 Games With Confirmed Release Dates

Monster Train emphasizes tactics more than Slay The Spire because while the order of what spells you cast and units you place is always crucial in this type of game, here you also have to think about positioning across three floors at once (you can’t place units in the Pyre room at the top). Normally, the first unit in a row will take the burnt of the damage until they die and the guys in the rear are protected – unless the enemy has a Sweep modifier that allows it to attack all your troops at once. A lot of abilities, like the Armor Imp’s power to give an ally some protective armor, only affect the first unit in line, so you want to make sure your troops are lined up to take the greatest advantage of that. You also have to consider that, by default, all of the enemy units will attack first, which means you generally have to consider defense before offense – a unit with strong attack but weak defense won’t survive to make use of that attack unless it’s protected. But that’s upended if you have a unit with the Quick modifier, letting them strike first and opening up new strategies.

Pretty much anything your units can do the enemy can do as well, which leads to a wide variety of weird “heavenly” creatures (who often appear just as demonic as anything from Hell) to fight against and weaknesses to exploit. Each battle culminates in a fight against a boss who first harasses you and supports their attacking units by moving between the three floors and casting buffs and attacks before joining the fight directly and locking off floors as they clear them. They, too, have random modifiers, so even though Monster Train tells you what bosses you’ll face in advance you still won’t be able to fully anticipate their moves until the battle is joined.

Monster Train is so great it’s been nominated for IGN’s PC Exclusive Game of the Year for 2020, but then it surprise-launched on Xbox on December 16 and is included in Xbox Game Pass. Check out some of our other favorites on Microsoft’s all-you-can-eat subscription service:

It can take a while to watch fights play out as your units and the enemy take turns hacking away at each other – especially when you already know you’re going to lose, because there are no surprises if you work out the math in you head before you end your turn – but thankfully there’s a setting in the menus to accelerate the pace at which that plays out.

I had far more fun trying things out for myself and learning as I went than I would’ve looking them up.

Honestly, there are far too many of these choices for me to detail them all without turning this review into an instruction manual. Suffice it to say that at just about every point you’re making important decisions, and they all have to be weighed carefully because you can never be sure what’s coming next. And while you certainly can consult the vast and detailed wikis and guide videos instructing you on how to use everything, I had far more fun trying things out for myself and learning as I went. The selection of battle music is great, too – the fact that I’ve never felt the urge to turn it off after dozens of hours played is a testament to that.

I will say that because Monster Train only saves at the start and end of each battle rather than after each turn it’s a little too easy to game the roguelike nature of it – a problem admittedly shared by Slay the Spire as well. Once I figured out that if my fingers slip and accidentally hit alt-F4 when I’m about to lose a battle the clock will be turned back when I reopen it, swallowing a defeat became much harder. But that’s kind of a me problem, isn’t it?

If, somehow, you become tired of the normal runs, Monster Train has lots and lots of optional modifiers to make it easier or harder (such as playing without a champion or allowing you to place more units on every floor) plus daily challenges and asynchronous multiplayer where everybody competes for score with the same modifiers, and more. Once it got its hooks into me, Monster Train felt almost bottomless… and that was before the developer, Shiny Shoe, started adding new content. That’s been coming at a pace where if you put it down for a while and come back, there’ll probably be something new to try.