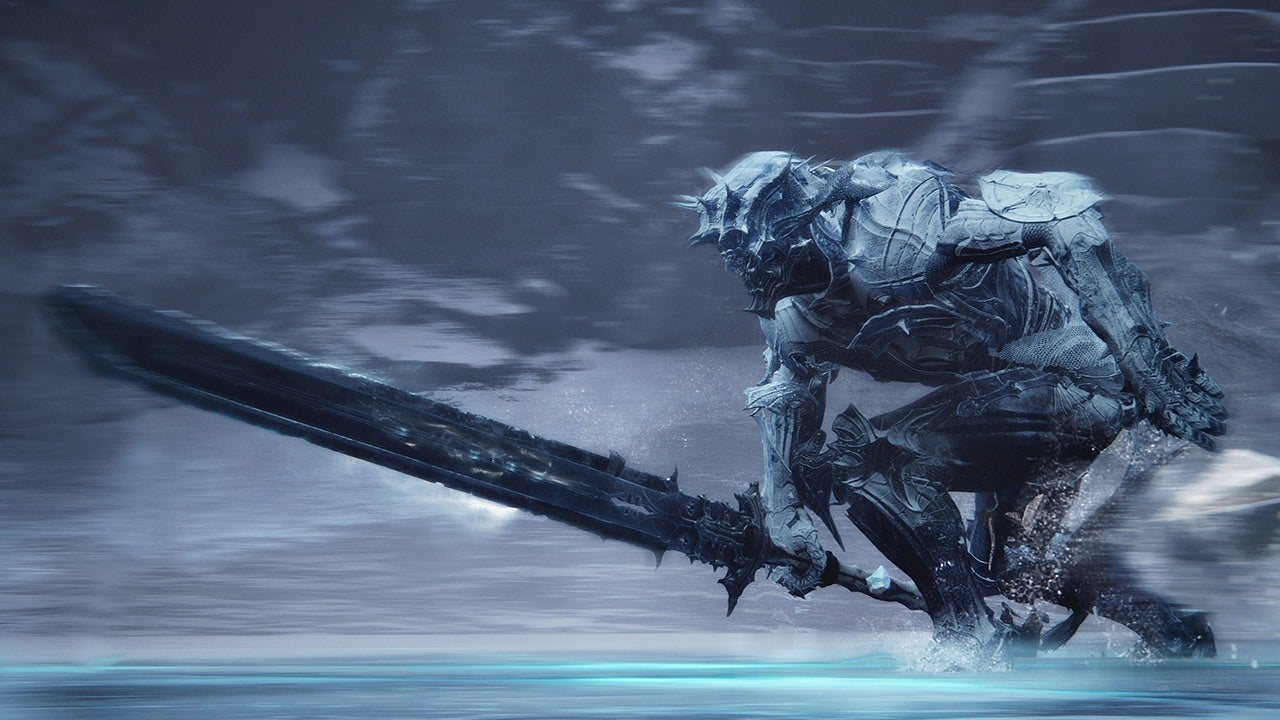 [Editor’s note: we got a late start on Mortal Shell, so through no fault of his own, our reviewer isn’t quite done with it yet. You can expect a full review up before the end of the week.]

Mortal Shell was kicking my ass for the first couple of days — more so than any of FromSoftware’s own Souls games, Bloodborne, or Sekiro ever did. On the bright side, if you’re looking for proof that this Dark Souls-lookalike manages to capture some of the brutally difficult spirit of the games that inspired it, my experience should serve as proof that yes, it certainly does.

This isn’t one of those throwaway Dark Souls comparisons that have grown so common over the last decade when talking about difficulty in any genre: You simply can’t talk about Mortal Shell without talking about Dark Souls. It flat-out looks, feels, and plays like a Souls game, right down to the oppressively creepy landscapes and the scattered NPCs muttering cryptic questions. You see it even in the gait of the protagonist and the lumbering sword swings of NPCs, which can slice off the lion’s share of your health bar if you let them land. Even the interface elements venture past mere homage and into imitation, which soured me in a way the other callbacks didn’t. Mortal Shell isn’t trying to hide that it’s riffing on FromSoftware’s creations; instead, it proudly wears them like a robe, much like the protagonist wears the bodies of four dead adventurers.

Ah, yes. Those are the “mortal shells,” you see. Without them, the main character looks like a fleshy skeleton of sorts, or a bit like the armored alien engineers in the 2012 film Prometheus. These shells are among the main ways in which Mortal Shells departs from Hidetaka Miyazaki’s vision to establish its own identity, and largely with success. They’re not just suits of armor; instead, they allow you to fight with the playstyle that (literally) suits you best. Since normal health and stamina bar upgrades don’t exist in Mortal Shell, you’ll end up gravitating to one of them depending on the situation or your playstyle. It’s a smart idea because it’s relatively easy to find all the shells with some light exploring, and I’d recommend grabbing them all early on lest you encounter some of the troubles I did.

These shells are among the main ways in which Mortal Shells departs from Hidetaka Miyazaki’s vision to establish its own identity.

I loathed the starter one, a basic knight. He’s terribly slow and has balanced stats, and so he doesn’t mesh well with my dodgy playstyle. I had a lot more fun (and success) when I found and slipped into Tiel, a roguish body with a pitiful health bar but a massive stamina bar that makes dodging attacks infinitely easier. He’s great for exploring, as his dodge briefly transforms him into a cloud of smoke that makes it easy to get past crowded hallways with gruesome enemies, such as a particularly memorable one who pulls swords from his body and tosses his poisoned head at you when he’s at low health.

Bosses? I found myself better equipped to fight them with Eredrim, who has a monstrous HP bar that can shrug off most attacks, although his stamina bar is laughable. Thing is, I didn’t find Eredrim before I got locked in an icy catacomb with the boss of one of Mortal Shell’s three major zones, which made for a fight even more lopsided against me than I’m accustomed to in this genre.

Worse than that, I got locked away from the anvil, which is used to upgrade weapons (or even exploring other zones for the other three weapons). And since the boss was wiping the floor with me as Tiel, I had no choice but to improve Tiel, although I disliked that I was forced to do so by grinding out the “tar” and “glimpses” needed to activate the perks of each shell. (At the same time, I’m grateful it was an option.) Tiel, for example, has some pretty amazing ones. With one perk, there’s a small chance that any hits on you will take away stamina damage but not health. Another perk completely removes the stamina cost from sprinting, allowing me to be more nimble. Even so, when I finally mastered the first phase of the fight, I almost screamed when I saw his health bar go back up. But in time, with patience and timing, I got him down.

I almost screamed when I saw the boss’s health bar go back up.

Mortal Shell got a lot more enjoyable once I got to where I could explore again. The moral of the story? Be sure you’re fully prepared before you jump down any three-foot ledges with no visible way to get back up. The ledge will end up feeling like a mountain, and Mortal Shell has no pity on you if you go too far too quickly.

I couldn’t have gotten past that roadblock without learning a few more of Mortal Shell’s tricks. Of them, “hardening” is what really sets Mortal Shell apart. There’s no traditional block button — instead, you can “harden” to make yourself completely invulnerable from one hit, even in mid-motion. Imagine our bony hero briefly becoming a statue, and you have some idea of what to expect. It’s a fun tactic that lets you time a devastating attack so it hits after an enemy would have hit you. It also only has a cooldown of a couple of seconds, although that can feel like an eternity in crowded dungeon halls when you’re being attacked by multiple enemies.

And now we come to the reason why I’ve been having such a hard time with Mortal Shell. If you can perfectly time a parry (and you have enough bars filled on your resolve meter), you can unleash a devastating riposte and gain a good chunk of your health back. It sounds cool, it looks cool, and it can make you feel like a badass when you pull it off… but I never shook the feeling that I was gambling when parrying. When I thought I’d learned the animations to watch for, the parry would still sometimes fail. I dedicated a whole hour just to teaching myself how to do it, and I’d still say I’m only 20 percent better than I was. That’s a big switch from Sekiro, where I felt like I’d mastered parrying a couple of hours in. It’s part of the reason why I found myself sticking to Tiel: it’s easier to simply dodge away from attacks.

Mortal Shell can be a brutally hard game, but I’m glad it draws inspiration from Sekiro by granting you a second chance of sorts.

Fortunately, Mortal Shell offers an alternative method of healing for those of us who can’t handle its parrying. There’s no “estus flask” here; instead, you hoard mushroom-like “weltcaps” that give back a scrap of health. These respawn on five-minute timers, so you can stockpile a ton of them with enough patience. It’s a bit of a pain in the ass, but I was grateful I took the time to farm them for the rest of my playthrough.

Mortal Shell can be a brutally hard game, but I’m glad it draws inspiration from Sekiro by granting you a second chance of sorts. If an enemy “kills” you, you get knocked out of whatever shell you were wearing and end up in your weak shell-less form; if you can get back to your shell, though, you’re instantly boosted back to full health and stamina. If you get knocked out a second time, though, it’s back to the bonfire — or, ahem, Sister Genessa, an enigmatic lady brimming with unsettling commentary about the bodies you wear.If you get back to your body, you’ll regain all the tar and glimpses that were on you when you died—and much as in Jedi Fallen Order, you’ll get your health back as well. When struggling I was with that boss I put that to good use, as I used my unclaimed body as yet another health potion of sorts.

In design, for all of its shadows and gooey pustules, Mortal Shell’s map has a lot more in common with The Legend of Zelda than Dark Souls. There’s a fetid swamp at the heart of the action, but the three big bosses reside in distinct zones: a catacomb, a castle filled with flame, and a forbidding tower complex with portals. You’ll need to venture into each of them and grab a gland from each of the big bad guys before the final showdown. There aren’t really any puzzles involved, but I like how the design invites exploration and a choice in progression. You can see that emphasis on choice in the shells as well, and the four upgradeable weapons you can earn at the beginning of each zone.

I do have some problems with the combat system that go beyond what may be my mediocre skill. Twice I got stuck in the lock-on animation when there was nothing to lock on to, and at other times NPCs I was trying to bait would get stuck on the terrain. (For that matter, I did, too, once.) In a game that requires such precision and punishes failure, losing because of a glitch is pretty outrageous, and Mortal Shell has already used up its free passes on that front.

All in all, I’m not entirely sure I’m enjoying myself. For better or worse, that’s a true Dark Soulsy feeling, and Mortal Shell captures it better than any other Souls-like I’ve played. I’ll have my final thoughts in the next couple of days, once I’ve finished and figured out whether this is pain or pleasure. Until then, I have a gland to collect.

Fall Guys: Brands Start Charity Bidding War to Get Skin in the Game