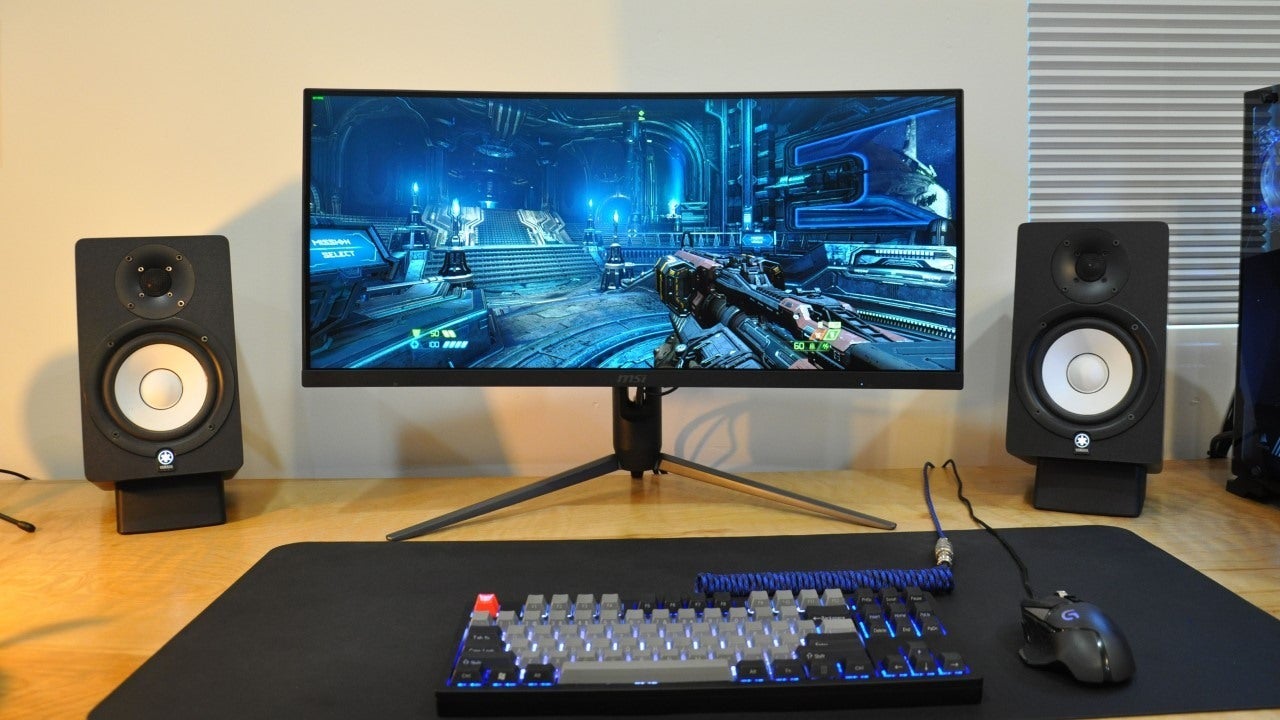 July 9, 2020 Off By tracy
Super-high refresh rates have become popular in competitive esports-focused gaming monitors, but they’ve recently started to trickle down (or trickle sideways) to more casual gaming displays. The MSI Optix MAG301CR is one such monitor, which for $350, offers a 30-inch ultrawide display along with 200Hz of super-smooth motion.

On the surface, the Optix MAG301CR looks like many other gaming monitors: it has a tripod-esque stand with two large, pointed legs, a frameless bezel around three edges of the monitor, and a little bit of RGB lighting on the back that provides a very subtle glow behind the screen at night. It has a slight 1500R curve, cable routing holes, and the stand has full height, swivel, and tilt adjustments for optimal ergonomics. Apart from the RGB lighting – which is customizable through MSI’s software – it’s not a particularly flashy monitor. There are no stylish accents, and it’s not slim by any stretch of the imagination (in fact, some folks may find its stand too deep to fit comfortably on a small desk). Instead, MSI opted to keep things affordable and put all its value toward the internal specs.

The 21:9 VA panel measures 30 inches on the diagonal, which is not huge, but the added aspect ratio does increase your field of view significantly over typical 16:9 displays. And at only 2560×1080 – that is, the ultrawide equivalent of 1080p – I’m not sure I’d want anything bigger, lest the image become too soft or pixelated. 1080p at 30 inches isn’t going to wow you with sharpness, but it’s acceptable, especially for a lower-priced monitor. The real draw here is the 200Hz refresh rate, allowing for super-smooth motion provided your graphics card is beefy enough to put out 200 frames per second. While it isn’t a night-and-day difference from 120Hz or 144Hz, it is definitely noticeable, and there aren’t many ultrawide monitors with that fast a panel – and certainly not for $350.

Apart from that, you also get FreeSync, the ability to accept HDR signals (though it can’t output anything near true HDR), and an Anti Motion Blur feature (which doesn’t work in conjunction with FreeSync). The monitor claims 1ms response time, but since there are a myriad of ways to measure that spec, it’s almost never worth putting stock in what the manufacturer puts on the box – more on this in a moment.

IO is fairly robust, providing two HDMI and one DisplayPort inputs, plus a USB Type-C port as an alternative to DisplayPort. You also get the usual two USB 3.2 Gen1 ports for any peripherals you want to plug in. The power supply is external, though, which means you’ll have a large brick under your desk – some may prefer this to a thicker monitor, but it’s rather annoying if you want your cables neatly hidden away.

I run all monitors I review through a series of Lagom’s LCD test patterns to see how they perform. When it comes to the basics, the Optix MAG301CR does alright – Gamma came in right around the desired 2.2, erring on the higher (or darker) side. For black and white levels, Lagom shows a series of squares getting closer and closer to the darkest black and brightest white possible – if each square is distinct from its neighbor, then it does a good job of keeping detail in ultra-dark or ultra-bright scenes. Both were right where they should be, ensuring you won’t miss out on those fine shadows and highlights – and since it’s a VA panel, those blacks will get darker than an IPS panel, which is great for gaming at night.

Gradients produced no noticeable banding, and viewing angles were okay-but-not-great – about what you’d expect for a VA panel. Since the monitor is so wide and the curve is more subtle, you might find the edges distort a bit in color if you sit too close – I had to sit a little over 2 ½ feet away for everything to look right in the viewing angle test. FreeSync worked beautifully with my test animations, even with my NVIDIA graphics card.

Response time, however, is where this monitor falters. Don’t let that 1ms claim fool you – this monitor has a pretty terrible response time, as shown both by Lagom’s flicker test and Blur Busters’ UFO ghosting test. Moving images produce a long, noticeable trail behind them, particularly with darker shades. This is common with VA panels, but most contain an overdrive feature designed to compensate for this. The Optix MAG301CR calls this “Response Time” in their on-screen display, and it can be set to Normal, Fast, or Fastest – but it sadly doesn’t have any noticeable effect on the ghosting, nor does the Anti Motion Blur feature (which produces very annoying image-doubling artifacts, while keeping the very noticeable motion blur). In other words, no matter what you do, this monitor has sub-par motion performance.

Once you’ve gamed on an ultrawide monitor, it’s hard to go back. The extra screen real estate really helps fill your field of view, absorbing you in the scene and giving you a slight advantage over your enemies (provided the game adjusts your field of view to match, which isn’t the case with many multiplayer games like Overwatch). Pair that with a super-smooth 200Hz – which I found easy to drive at 1080p with my RTX 2060 Super – and you’ve got a recipe for seriously stepped-up gameplay compared to more traditional displays.

Unfortunately, the ghosting mars the experience somewhat. Every movement I made in Doom Eternal, while incredibly smooth, was softened by smear. I still had loads of fun mowing down demons at a mile a minute, and not everyone is as sensitive to ghosting as I am, but if you care about motion quality – which I assume you do, if you’re considering a 200Hz monitor – it might drive you a little crazy. (My unit also came with copious amounts of blotchy glow along the entire top and bottom edges of the screen, which was noticeable every time black bars came up during cutscenes or movies.)

That said, there aren’t many other monitors with these specs at this affordable a price, and the ones that do – like the Viotek GN35DA – come with similar complaints from users (though we haven’t tested it ourselves). If you can bear to spend a bit more, the LG 34GL750-B is almost certainly a better bet, though at $450, it may not match your budget. Personally, I’d gladly sacrifice a bit of my GPU and headset budget for a better display.