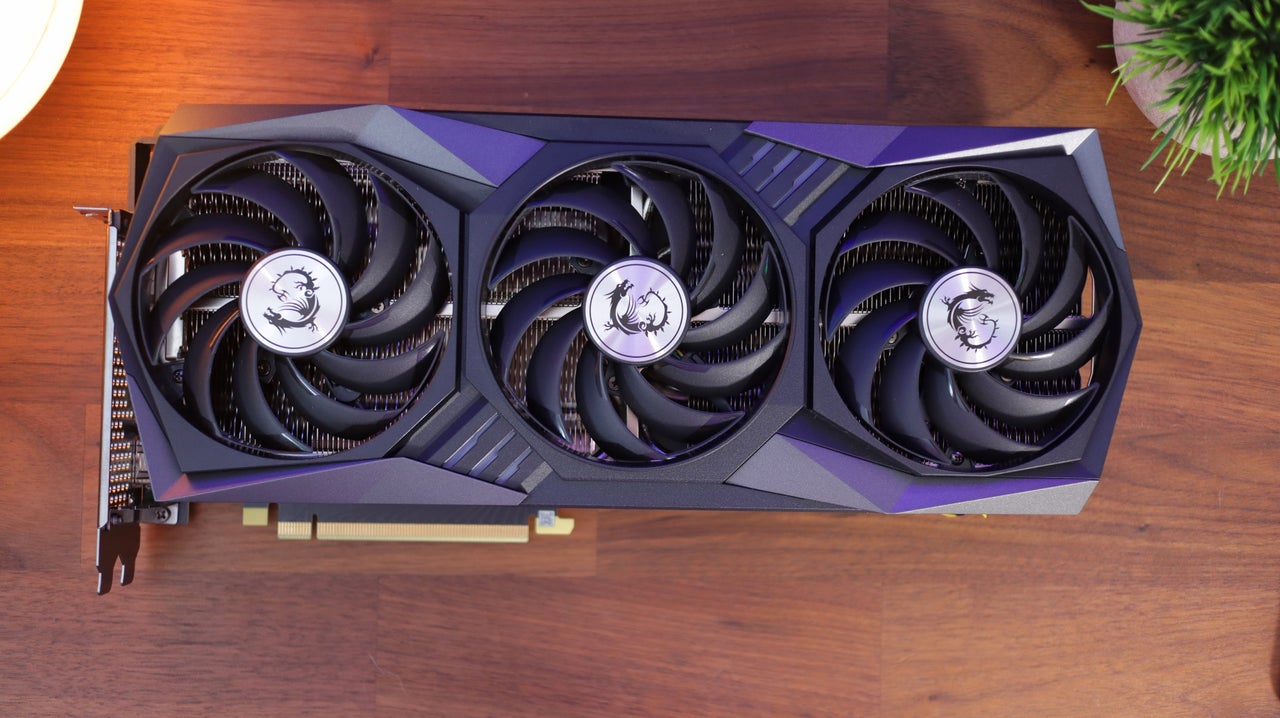 September 28, 2020 Off By tracy
With the RTX 3090 Founders Edition review out the door, it’s time to start looking at third-party graphics cards. It’s an exciting prospect, as we can finally see how the Nvidia RTX 3090 Founders Edition can be improved with new coolers, factory overclocks, and unique designs. Today, I’m looking at the MSI RTX 3090 Gaming X Trio. Retailing for $1589, is this GPU ready to become both the brains and brawn of your gaming rig?

MSI’s RTX 3090 Gaming X Trio is almost identical to its RTX 3080 version, which I reviewed here. Like the Founders Edition, it’s a massive GPU, coming in at 13.2 x 5.5 x 2.2. This allows it to take up two slots instead of the FE’s three, but is almost a full inch longer, thanks to its generous heatsink. It’s great for keeping temperatures down, but might pose a problem for some PC cases and installs with front-mounted radiators. It fit fine in my Lian Li Lancool II but when I swapped it over to my Ryzen Gaming PC and the Corsair 280X liquid CPU cooler, there’s only about a millimeter to spare before touching the PC fans.

That extra space is being put to good use with MSI’s new Tri Frozr cooling system. This system is composed of three core parts: the new Torx Fan 4.0, which joins each fan blade at the end and provides greater air pressure, high contact core pipes that provide a greater surface area for drawing heat away from the GPU, and the new Wave Curved 2.0 fins, which disrupt airflow to increase cooling efficiency. It’s a multi-faceted system, but the fundamentals are sound: greater surface area on the heatsink and improved airflow are proven elements to any effective cooler, and it’s good to see MSI continue to innovate.

The RTX 3090 needs a good cooler, too, because it’s a high-powered GPU. Like the Founders Edition, MSI’s version features 10,496 CUDA cores and 24GB of incredibly fast GDDR6X memory clocked to 19.5 Gbps, providing it with a total bandwidth of 936GB/s. The Gaming X Trio comes with a slightly higher out-of-box Boost Clock at 1785MHz versus the Founders Editions 1700MHz. With GPU Boost, however, both cards routinely exceed this. Where the Founders Edition would hover around 1900MHz, however, the Gaming X Trio would speed itself up to just over 2GHz, translating to a several FPS lead in most of my tests.

The Gaming X Trio is also uniquely suited to overclocking. It features triple 8-pin connectors for enhanced power delivery. In the interest of time, I was not able to test its overclocking capability first-hand, but between the heightened power and massive cooler, it’s positioned well to eek out every last ounce of performance. Just make sure you have an adequate power supply, as the card is specced to consume 370 watts of power, a full 20 watts more than the FE.

That said, you’ll need to do some tweaking to help the card reach its potential. Despite the lengthy heatsink and triple fans, the card is tuned for acoustics over thermals. Out of the box temps peaked at 81C, a full 10 degrees warmer than the RTX 3090 Founders Edition. Even at this temperature, the fans never ramped above 55%. The card was fairly quiet with this tuning, but those temps also prevented the card from consistently boosting to its top speed, making it underperform compared to the Founders Edition. Applying the default fan curve in MSI Afterburner completely fixed this, dropping the temps to 69C at max and pushing fan speed between 65-69%, even earning a few extra FPS in the process. At those fan speeds, it was definitely louder, but still quieter than my Gigabyte RTX 2080 Ti XTREME. I completed my testing using this modified fan curve.

The last thing to note before diving into performance is that the Gaming X Trio is absolutely a card for lovers of RGB. A large LED light strip lies on the back edge, the logo illuminates, and a trio of strips slash across the middle fan. It’s bright and bold, but if you’re not already a fan of RGB, this probably isn’t going to change your mind.

After testing the RTX 3090 Founders Edition, I went into this well-aware that I was testing what is, in essence, a Titan by another name. As such, I ran it through my battery of synthetic rasterization and ray tracing tests, gaming tests at all three major resolutions, as well as rendering and 8K gaming tests. Here’s how it performed:

As I expected, the Gaming X Trio leads the pack in rasterization performance. The additional boost clock speed and GPU Boost overhead lend it a meaningful edge in these tests.

Compared to last generation’s Nvidia RTX 2080 Ti (sadly, I did not have a Titan RTX to compare again), the performance uplift ranged from 32% to 87% higher, averaging out to 52.7% higher FPS in my testing. Do note, however, that the 2080 Ti used for testing here is factory overclocked and offers 5-7% higher FPS than the standard 2080 Ti Founders Edition.

Since many gamers will be comparing add-in boards to the Founders Edition directly, I also ran a comparison to show what uplift you can expect there. It’s small by virtue of GPU boost, but the Gaming X Trio does offer an edge that could be extended further with a dedicated overclock.

At 8K, the results seem to narrow further with the two cards consistently trading blows, both with and without DLSS. Needless to say, it remains amazing that we’re talking about 8K at all when only one generation ago 4K was still a struggle.

The other half of the equation for any 3090 is going to be professional and creative workflows. As I noted in the original review of the RTX 3090 Founders Edition, this GPU is a rendering powerhouse and it’s here that its value really comes into perspective. Just like that OG GPU, the Gaming X Trio delivers simply remarkable rendering speed improvements. Likewise, that massive frame buffer allows video intensive multi-tasking to become a much smoother process and I was able to render while still working in alternate viewports or my Premiere Pro timeline. That said, the results here are extremely similar between the two variants, so it wouldn’t make sense to choose either based on rendering performance alone.

The Nvidia GeForce RTX 3090 Founders Edition is available for $1,589 from retailers such as Newegg, and Microcenter.