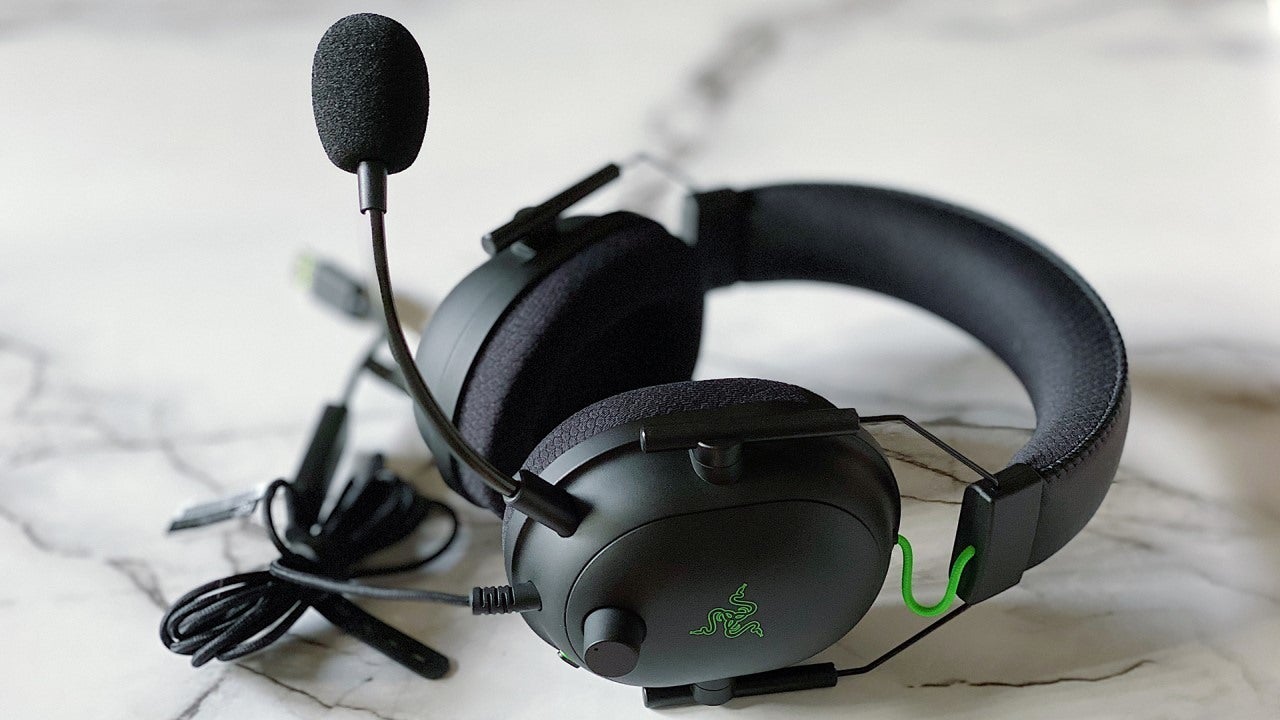 August 6, 2020 Off By tracy
When it comes to esports, accuracy and precision are important, and having great audio with an excellent soundstage is a vital part of that. That’s where esports gaming headsets like the Razer BlackShark V2 come in handy.A follow-up to the glossier BlackShark, which has been lauded for its comfort, great sound quality, and cool design, this successor has a more subdued look and not much in the way of frills and thrills. But, that’s only because it’s honed in on the way it lets you experience audio in gaming instead.It’s hitting the shelves with three new technologies either developed or co-developed by Razer and THX. These include the THX Spatial Audio, which essentially offers THX Competitive Mode for some of the most popular games out there, as well as the new Razer Triforce Titanium 50mm drivers, which are made up of three parts – each for the highs, mids and lows.

The result is a terrific gaming headset that sounds great and boasts a soundstage incredible enough to give you an actual competitive edge in gaming.

Light weight and comfort take center stage in the BlackShark V2’s design. Perhaps the first thing you’ll notice about this pair of headphones – aside from its Razer green trimmings – is how light it is. At 262g, it’s among the lightest offerings out there, with the HyperX Cloud Stinger following closely at 275g and the SteelSeries Arctis 5 at 280g.

This certainly matters, as being this lightweight considerably reduces the wearer’s fatigue and makes your gaming experience that much more comfortable. If you expect to be playing for hours on end, it makes a huge difference.

That light weight makes it a bit more travel-friendly, too, though the headset itself isn’t exactly designed for travel. It’s not foldable and not exactly compact, though it does have its own travel bag, so its super light weight certainly helps make it easier to tote with you when traveling or commuting.

Don’t take its lightweightness to mean that it isn’t made of quality materials, however. The ear cups look to be made of high quality, albeit light, plastic with a matte finish (a departure from its predecessor’s glossy finish), and they don’t feel like they would crack if a sudden heavy weight was applied. The headband is lined on top with plush leatherette, giving it a sophisticated flair, and the removable mic comes with a super flexible stem that also feels solid.

Finally, the headband and ear cushions are made of memory foam and wrapped in flow knit fabric. These cushions also add to comfort here, as not only is there a generous thickness to them, especially the one on the headband, but that fabric they’re covered in feels soft to touch and really does help to minimize sweat and reduce heat during the most intense moments in the game.

If you’re a fan of RGB lighting, the BlackShark V2 might disappoint as it has none of those frills. Personally, I kind of prefer it that way. The omission helps keep its cost down, and having RGB lighting on your headset on top of your gaming keyboard, your gaming mouse, and your gaming PC is a bit of an overkill for me.

In lieu of RGB lighting, Razer does spruce it up a bit with some green trimmings on the Razer logo and the audio cable connecting the two ear cups. This shade of green isn’t necessarily attractive to me, but I appreciate that it can be appealing to a lot of gamers. It also adds to the headset’s character, especially when coupled with its aviator look, which I actually really like.

As far as other thrills and frills, there’s really not much. The retractable mic is the new Hyperclear Cardioid Mic that Razer has developed and is launching for the first time on the BlackShark V2, but we’ll get to that in detail later. There is a volume control knob and a mic mute button, both of which are on the left ear cup. That’s pretty much it.

Another first that’s launching alongside the Razer BlackShark V2 is THX Spatial Audio, which has its own section in the Razer Synapse software. This new technology essentially helps deliver more accurate sound positioning for a more realistic sound stage and 7.1 digital surround sound effect.

More importantly, it comes with the new THX Game Profiles, which are basically audio profiles custom-tuned to specific games. At the time of my testing, there are Game Profiles for 18 of the most popular games out there, including the four that I used to test the headset – Red Dead Redemption 2, Doom Eternal, Sekiro: Shadows Die Twice and Counter-Strike: Global Offensive.

Each Game Profile gives each game its own THX Environmental Mode for a more immersive audio experience, and Game Profiles for competitive games have an additional THX Competitive Mode that’s designed to give you a gaming advantage.

This new addition to the Razer Synapse software, which you’ll find in the Mixer section under Audio and can toggle on/off, is straightforward to use. I’m not sure how downloading the profiles will work post launch, as I was testing them in pre-production, but the controls themselves are pretty easy to figure out.

The software seems to list all the games you have installed on your computer, and the THX Environmental and THX Competitive Modes, if available, appear under each game’s Spatial Output dropdown menu. As far as fine-tuning the surround sound, it allows you to simply drag each of the points and adjust where sounds are coming from to your liking.

On top of these THX Spatial Audio settings and presets, the Razer Synapse software’s EQ has its own general use profiles as well like Music and Game, though each of its 10 bands are also customizable. It also has dedicated controls for Bass Boost, Sound Normalization, and Voice Clarity.

The sound quality of the Razer BlackShark V2 is surprisingly great. Admittedly, at default, it sounds a bit muffled, like there’s a blanket on top of the sound. High end can be a bit rolled off or muffled, which somewhat reduces clarity and detail. The environmental effects are also more mid-focused, not as articulate or as detailed. In RDR2, for example, I don’t hear the high-end pitter patter when it’s raining, just more of the lower frequency thuds, making the rain sound heavier.

But, I’m really being nitpicky here for the sake of this review. Unless you’re more discerning with audio, or you’re comparing Razer BlackShark V2 with other high-end headphones, this shouldn’t bother you. In fact, you probably won’t notice the difference.

The bass response is very good, giving your gaming experience a lot of rumble even without turning on the Bass Boost, while the mids are present, and don’t sound hollow. In addition, the soundstage is incredible. You’re really getting the full 7.1 experience – even without the THX Spatial Audio features. It’s accurate with great spatial separation, meaning you can hear things move around you and know where they’re coming from.

It’s pretty obvious that this headset has been designed specifically for gaming. You won’t get fatigued from too much high-end information. In fact, you won’t notice that slightly muffled sound when gaming, and the bass obviously offers a lot of rumble.

Sadly, it’s not as good for other media. You want all the details when watching movies and listening to music. Unfortunately, in movies, I notice the muffled sound a little more, making it a bit harder to get the full experience, especially when it comes to the dialogue. Music is the most affected media here, especially when listening to something with a lot of organic sound. Not that it doesn’t sound good. It sounds balanced enough, but again, it’s just a little bit rolled off or muffled.

The Razer BlackShark V2 is the first headset to feature the new Razer Triforce Titanium 50mm drivers. This patented design basically splits a single driver into three parts so that the highs, mids and lows each have their own unit. The idea of this design is to allow for the individual tuning of each frequency range. Also, by separating the highs, mids and lows into three distinct parts, each frequency range should get a purer representation in concept.

Unfortunately, the high end is still a little rolled off. That said, this new design really does seem to allow for better fine-tuning of each frequency range, making these headphones incredibly versatile when it comes to customizing the EQ, as well as boosting the base, adjusting sound normalization, which is a compressor that makes the loud parts quieter and the quieter parts louder, and toggling voice clarity, which is basically a high-end boost.

As for the THX Game Profiles, you’ll certainly notice a difference. While keeping the sound quality the same, both the THX Environmental Mode and THX Competitive Mode essentially offer distinctive EQ profiles for each game for their own purposes.

The THX Environmental Mode, though slightly different for each game, generally offers an expanded surround sound, making things sound just a little wider, as if you’re actually inside the world you’re playing in. That’s pretty great, and certainly adds to your gaming immersion. In addition, environmental effects like rain, fire, footsteps, and people talking in the background are louder while keeping their spatial positioning.

The THX Competitive Mode, on the other hand, essentially takes many of the environmental sounds and mutes them a little. That’s with the exception of the sounds of the players, friendly and otherwise. By doing so, it makes the sounds your enemies make feel a little more present. Spatial positioning is also great, though it doesn’t sound as wide as the THX Environmental Mode. But, the goal here is to give players that competitive edge in audio – by hearing enemies better and knowing where they’re coming from, you don’t have to look around and find them. You’ll know when they’re coming and where exactly they’re coming from.

It is worth noting, however, that the THX Competitive Mode seems only available for competitive games like CS:GO. The non-competitive games only have the THX Environmental Mode. Though again, I was using the pre-production version of the software.

Also launching with the Razer BlackShark V2 is the new Razer HyperClear Cardioid Mic with USB Sound Card. It sounds incredibly clear at default, and may be further customized to your liking via the Razer Synapse software. It does have a mic boost, if you want to be really loud, and boasts a couple of cool features as well.

One of those is Voice Gate, which is very effective. If you’re not familiar, Voice Gate is like a door that opens whenever you’re talking and closes when you’re not. It basically limits the mic from picking up background sounds from your end, especially when someone else is talking or no one is. There’s also Ambient Noise Reduction, which when turned on rejects most of the unnecessary background noise.

Finally, the mic has its own 10-band EQ in the software, with presets like Mic Boost, Broadcast and Conference. Have a shrill voice? This will help tone that down a little.