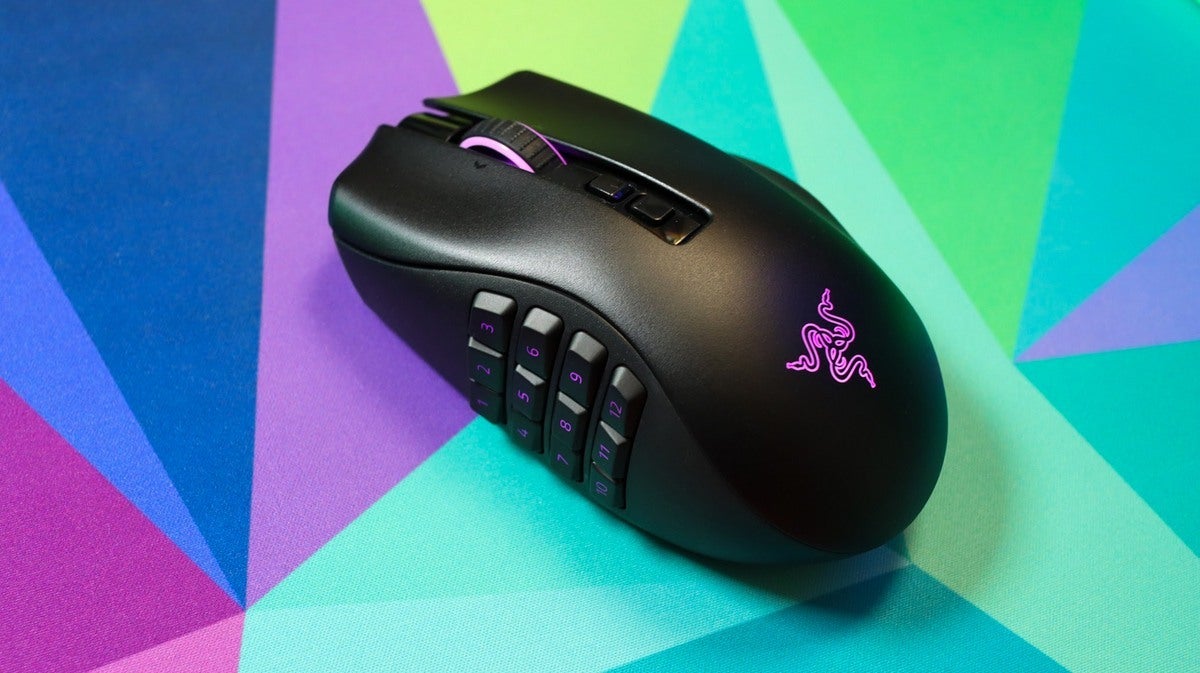 September 26, 2020 Off By tracy
The Razer Naga may be the most iconic MMO gaming mouse of all time. It’s no exaggeration to say that its thumb grid changed the way many gamers play, both inside and outside the MMORPG genre. As a result, it’s been a mainstay in Razer’s lineup since 2009, going through multiple iterations and inspiring more than a few clones. With the Naga Pro, Razer has severed its tail, fitted it with a 150 hour battery, and improved its internals – but does it do enough to justify the upgrade from the Naga Trinity?

The Naga Pro shares a lot of similarities with its predecessor, the Naga Trinity. It looks the same and feels the same in the hand. It features the same ability to swap the side panels and carries through the Naga’s history of versatility above all. Of course, looks are only skin deep, and once you take a closer look, the Naga Pro stands apart as the best Naga yet.

This is a mouse laden with inputs ready to be mapped to the different skills and spells from your favorite MMO, but its benefits don’t stop with just one genre. The 12-button thumb-grid comes pre-installed and is clearly designed with skill-rich MMOs in mind. When you need fewer buttons, you simply pull the panel from the magnets holding it in place and swap it with the six or two button panels that also come included in the box. You don’t even need to turn the mouse off in between: Razer’s Synapse software will automatically detect the new panel and swap your keymaps on the fly. It’s an ingenious system that allows the Naga to be, in essence, three mice in one and is seamless in its execution.

This system debuted on the Naga Trinity, but has definitely been refined here. The speed and ease of swapping plates, and how instantaneously Synapse reacts, reflects a level of polish that’s impressive and makes the system feel natural. Like its predecessor, there are three panels: a 12-button grid that’s perfect for MMOs, a 6-button for MOBAs and RPGs, and a 2-button panel for shooters. The middle panel has been changed since last generation, dropping the circle layout for two straight rows with buttons that are tall and narrow, extremely reminiscent of the Logitech G604. The mouse wheel also tilts to either side for two additional inputs. By default, these are mapped to “repeat scroll” and will rapidly move up and down web pages and documents. It’s neither as fast or fluid as the Logitech G502’s Hyper Fast scroll wheel but is definitely an improvement over normal scrolling.

Depending on your configuration, you could have anywhere from 9 to 19 inputs, plus one more if you count the profile button on the bottom. That’s already quite a few, but using Hypershift or combining inputs with modifier keys can easily double, triple, or even quadruple this button count. Unlike some of Razer’s more traditional, lower input mice, using HyperShift felt like a viable option here since I had buttons to spare.

The ergonomics of the mouse are great no matter which side panel you’re using. It’s on the larger side and is wide as well as tall, so feels like an ideal fit for palm-gripped gamers, but I was able to comfortably claw grip it just fine. The right side flares out to support your ring finger, which decreases finger drag in games and helps brace the mouse to stay on target while triggering side buttons. I especially liked how the scoops on the left and right buttons guided me toward the wheel, which made tilting the wheel feel like second nature.

Coming to grips with the layout of each side panel is surprisingly fast. The trickiest could easily be the 12-button grid, but Razer has angled each button and contoured the whole side to make it apparent which button you’re on without needing to look. Reaching the bottom row is just as difficult as past Nagas, however. The 6-button panel is likewise intuitive thanks to the narrow face of each button. I also really liked that each of the side buttons offered a nice, mechanical click instead of the spongy bump on my old Logitech G600 MMO mouse.

The Naga Pro uses Razer’s latest HyperSpeed Wireless technology to deliver a steady, fast connection. The company claims HyperSpeed is 25% faster than any other wireless technology on the market today, tested by a third party certification body, and even faster than many wired gaming mice. I tested it side by side with wired options from Logitech and Corsair and can’t say that it felt noticeably more responsive to me, but even more importantly, but it didn’t feel any slower despite being wireless, and glided like a dream on its new PTFE mouse feet.

This wireless gaming mouse also supports Bluetooth, which isn’t as fast, but is a welcome addition for when you need a mouse on the go. The battery life is excellent, with 100 hours using HyperSpeed Wireless and 150 using Bluetooth. I’ve used the mouse for around 30 hours and can report 30% lost battery, so the numbers seem accurate. The only thing I feel is missing is an indicator LED, which would eliminate the need to go into Synapse to check the remaining battery.

Both the sensor and switches have also undergone major upgrades. The Naga now uses Razer’s premiere Focus+ Optical Sensor. It’s the cutting edge of what the company has to offer with a maximum DPI of 20,000 and advanced features like automatic surface calibration and Motion Sync to improve accuracy. The switches are also optical and the same as found on the Viper Ultimate. They use infrared light, not mechanical contacts, to actuate, which improves their responsiveness by eliminating debounce delay and cuts down on wear and tear over time.

Compared to a typical high-end mouse switch, often rated at 20 to 50 million clicks, the Razer Optical switches are rated for 70 million. I obviously wasn’t able to test the mouse over the long-term, but the dreaded double-click issue that plagues aging mice should be a thing of the past with the Naga Pro.

Getting up and running with the Naga Pro can take some time if you plan to customize the inputs, but Razer’s Synapse 3 software makes the process easy. Every button but left click can be remapped or assigned a secondary function with HyperShift. By default, the inputs match the numbers printed on their sides, which works well in games with numbered skill bars, but Synapse allows you to program macros, trigger program launches, send text, control your media, and much more just by selecting from a menu. You can save keymaps for each side plate ahead of time, so when it comes time to switch, your keys will be ready and waiting. The Naga Pro can also store five profiles to its onboard memory, so you can take these bindings on the go.

The body of the mouse sports two lighting zones — the mouse wheel and palm rest — but, oddly, only the 12-button panel features is backlit. Each of these zones can be customized within Synapse, either by selecting a Quick Effect (Spectrum Cycling, Breathing, Static, etc.) or an Advanced Effect using Chroma Studio. The app can be thought of a bit like Adobe Photoshop for Razer’s RGB lighting ecosystem.

Nearly a dozen effects can be customized and layered to create a unique lighting scheme to match your setup. The effect is enhanced the more Razer peripherals you have, but I was able to match the Naga Pro, my FireFly mouse pad, and the charging base from my Viper Ultimate (which is also compatible with the Naga Pro) to the Corsair RGB PC fans in my gaming PC within minutes.

Razer Synapse has come a long way since its debut and has become one of the most powerful, easy-to-use pieces of software from a major brand today. Best of all, once your profiles are loaded onto the Naga’s onboard memory, you’re safely able to shut down the program and take your macros and keybinds with you.

My first experiences with the original Naga were with World of Warcraft, so I wasted no time hopping back in to try again with one of my alts. The 12-button side panel is the perfect option for games like WoW, rich in skills but big on movement. By keeping the grid matched to my number row, it covered my entire first action bar. Using the game’s keybind system, I assigned my three others to numbers and modifier keys: Shift+1, Alt+2, Ctrl+3, and so on. With just the time it took to save those, the Naga Pro allowed me to have 48 commands just under my thumb — more than what even most dedicated MMO players will use.

Hopping into a dungeon, I was able to move much more freely, keeping my hands on the movement keys at all times. Since I never had to move my left hand, and my thumb was always on the grid, I was able to fire off skills more quickly and move out of danger without missing a beat. The mechanical click of each key also made sure I never missed a taunt when tanking Eye of Azshara.

The Naga Pro also gave me much more control in Battlefield 5. Swapping over to the 6-button panel, I was able to map crouch and prone directly under my thumb, making it easy for me to drop the minute bullets began to fly. I mapped the alternate weapon, gadgets, and grenade below that, leaving my left hand on WASD and my right hand doing the bulk of the work. Swapping back to my Viper Ultimate, I immediately missed having these extra keys. Once I got used to using the Naga, moving those functions back to my left hand felt genuinely cumbersome.

No matter what I was playing, Razer’s HyperSpeed wireless performed flawless. Connection never dropped or even faltered, staying rock steady the whole time. Not having the tether to my PC also made big sweeps of my mouse, taking in the vistas and doing spin jumps between bosses feel more free than I’ve experienced on an MMO mouse.