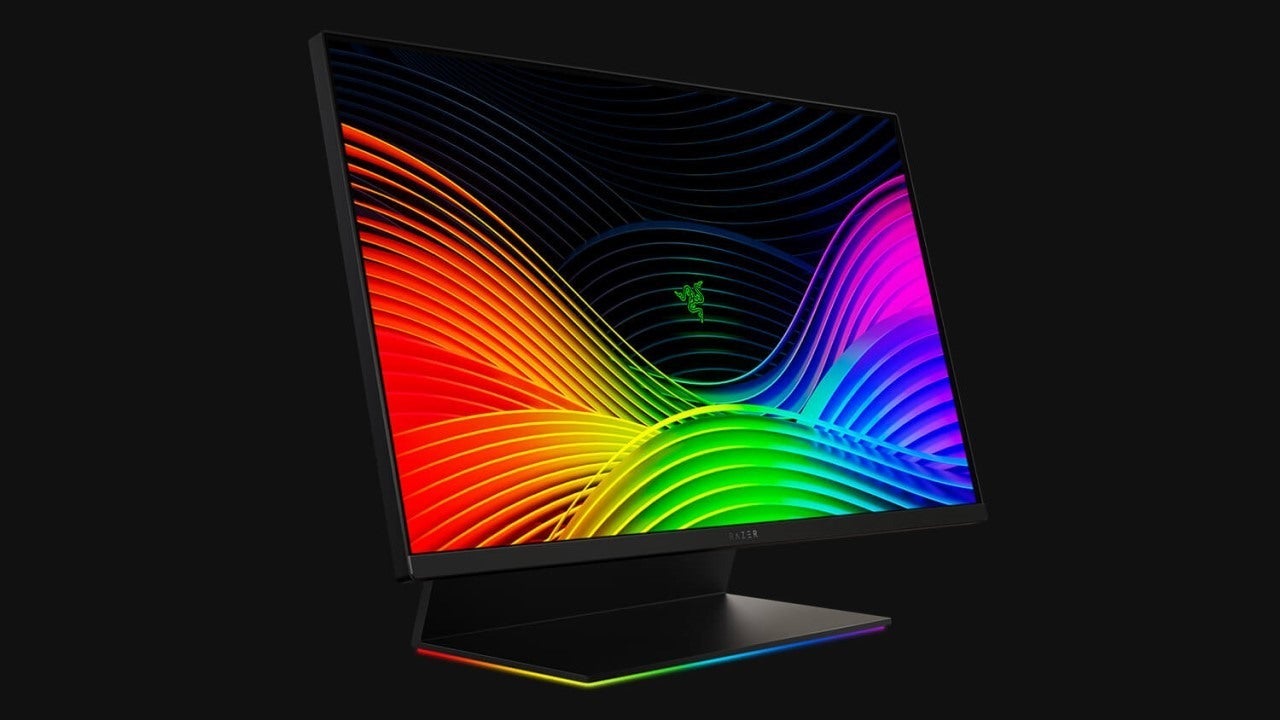 March 21, 2020 Off By tracy
The Razer Raptor 27 is the company’s first gaming monitor and it shows. Based on performance alone, the Raptor 27 has merits as a speedy and sharp 27-inch gaming display. Razer’s lack of experience in making displays, however, is evident by the simple fact that it’s trying way too hard with the display’s design.It takes a perfectly agreeable 27-inch, 144Hz, 1440p panel and wraps it up in an admittedly clever but ultimately overdesigned package. To be sure, there are aspects of the design worthy of applause; the forged aluminum stand is rock-solid, and the stand’s under-glow lighting and the fabric-covered back panel look awesome.

On the other hand, the elaborate cable-management system is overly complicated, and opinions will vary about the neon-green cables Razer includes with the display. One area where Razer does not lack confidence is pricing; the Raptor 27 is one of the more expensive 27-inch gaming displays on the market at its list price of $699.99.

Nothing about the Raptor 27 looks or feels cheap (nor should it, given its price.) Impressively thin bezels frame the display, the back panel boasts a unique cloth covering, and the whole thing sits atop a wide, sturdy base.

The forged aluminum slab of a base keeps the display from even thinking about wobbling, but it takes up a lot of desk space for a 27-inch monitor with a footprint of 13 inches wide by 7.5 inches deep. And given the bulk and heft of the Raptor 27, it’s not the best choice for LAN partiers looking to lug their display to and fro.

The fabric covering on the back of the display looks cool and adds a feeling of elegance to the design. The most standout feature of the display, however, is the over-the-top cable-management system, which makes the back of the monitor look like a freaky pasta maker turning out radioactive fettuccine.

The back of the stand features five channels for routing cables from the back of the display to the base of the stand. Razer includes five cables with the system – power, DisplayPort, HDMI, USB-C and USB-A extension cable – all of which are flat and neon green. There are four slats that sit between the channels. You remove the slats to thread the cables through the channels and then pop the slats back in place to secure the cables. Razer makes it easy to plug the cables into their corresponding ports because the monitor can rotate 90 degrees when raised to its highest height adjustment where the row of ports is visible and more easily accessed.

While the neon green cables are certainly eye-catching, the whole setup is a bit impractical. The cables are thick and not as pliable as I would have liked, however, which made routing them a bit of a chore. And I was unable to get one of the slats to snap back into place because one of the securing tabs snapped off, and its absence detracts from the look of the elaborate cable-management system.

Also, if you don’t leave enough slack in the cables between the top of the stand and the back of the display, you’ll send the slats flying when you raise the display up and rotate it 90 degrees — the cables will pull and pop the slats right off. Also, if you want to use one your own cables, it will need to be flat if you want to route it through the fettuccine machine. And if it’s not neon green, it won’t match.

The display lacks speakers, so you need to use headphones or external speakers. Plugging in headphones would be much easier if the audio jack were located on the side rather than tucked up on the back panel with the rest of the ports.

As opposed to the wild cable-management system, the display’s RGB lighting is much calmer. A thin strip of lighting runs around the perimeter of the base and acts as underlighting. You can control the color and pattern of the lighting via Razer Synapse 3 software, and the lighting’s underglow gives the appearance that the display is hovering just above your desk. It’s a perfect implementation of RGB lighting, adding a dash of color and pizzazz without being distracting.

Aside from the RGB lighting, the display’s design is all black. A subtle Razer logo is centered on the bottom bezel and that’s it for adornment. Further, there are no buttons or ports located on the sides or front of the display for a clean, minimalistic look from the front. A small joystick sits on the back panel and acts as the power button and navigation tool for the OSD.

The OSD is well organized, clearly labeled and easy to use. There are preset profiles for FPS, Racing, and MMO games as well as a Streaming preset that greatly raises the brightness to keep your recordings from looking dull. You’ll also find settings for turning on Adaptive Sync (the display supports AMD FreeSync and is compatible with Nvidia G-Sync) and HDR. There’s also a setting called Overdrive, which you’ll need to set to Strong to push the panel to its fastest 1ms response time.

As for the display itself, it’s an IPS panel that supports HDR400 and 95% of the DCI-P3 color gamut, which is wider than sRGB. Maximum brightness is rated at 420 nits, which surpasses the 400-nit minimum needed to be certified as HDR400.

On the white saturation test, I was able to see an impressive 11 of the 12 light-gray checkerboard patterns against a white background after lowering the brightness and contrast level. On the gradient test, I saw no banding as the gradient pattern transitioned smoothly from black to white and vice versa.

Running at the fastest response time of 1ms and at the highest refresh rate of 144Hz, the Raptor 27 turned in one of the best performances on the response time test. The top two boxes showed only the slightest flicker and the rest of the test image was still. Most displays show some flicker in the top four of the eight boxes of the test.

Next, I tested real-world gaming on the Raptor 27 by playing CS:GO and Overwatch. Both games were buttery smooth and showed vibrant colors and great contrast. I saw no blurring with CS:GO, and the game looked realistic with a dynamic image with details visible in both bright and dark areas of a scene.

Overwatch is another great test for a monitor because it’s both colorful and fast moving. Overwatch’s rainbow of colors popped, and the display had no trouble keeping up with even the most chaotic of battle scenes when I was running for my life.

The Razer Raptor 27 is available direct from Razer for its list price of $699.