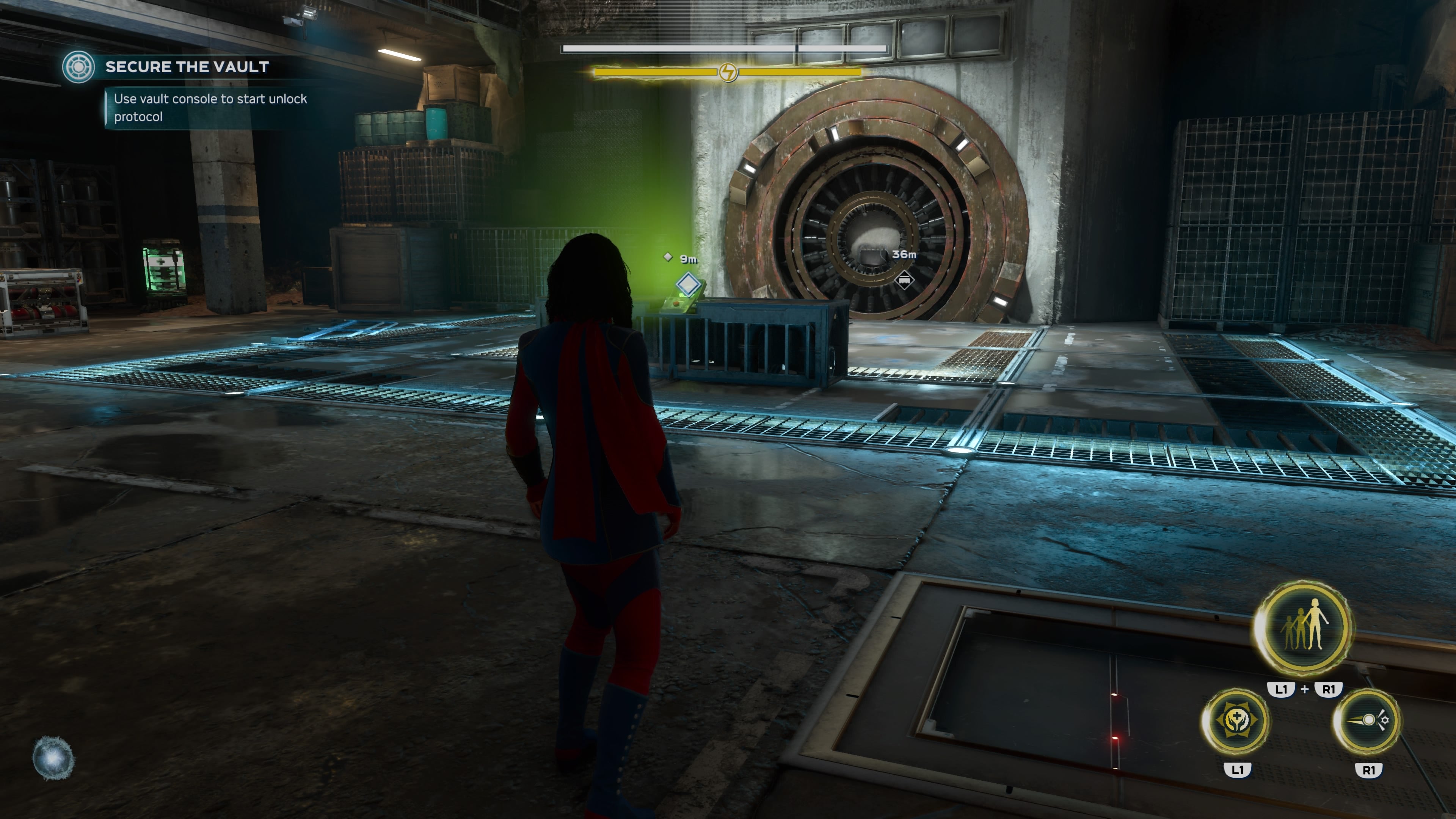 Please click or tap the links below to jump to different sections:

There is a secret mission to be found within the Marvel’s Avengers beta and it can only be accessed by following a very careful set of steps. You must first launch into the Stark Realities mission.

In order to access the secret mission, you need to find a secret SHIELD bunker underground. Unfortunately, your tactical awareness will not tell you where this is. Instead, you’ll need to use Jarvis’ signal to find its location.

When you first launch into Sabotage Threat Sector: Stark Realities, look at the main objective and head forward toward the left of it. When you hit the surrounding mountainous wall, continue in the same direction. When you reach a dropoff in this direction, you’ll be close.

Keep heading that way and you’ll see the pathfinder in the upper lefthand corner of your screen pop up. It will start beeping as well.

Follow that sound and pathfinder and you’ll eventually reach the SHIELD bunker underground. Interact with it (it’s the white dot in the screenshot below) and the Avengers will head inside.

Grab the resource chest in here and then open the location chest marked by a waypoint inside. This will give you the location to the secret mission in the form of a Vault Resource. You’ll also get some gear and resources too.

At this point, you can go to the menu and head back to the Quinjet. On the War Table, you’ll see a new region available: Snowy Tundra.

The Resistance has discover the hidden location of another SHIELD Vault, but AIM is in the area. The Avengers must recover its contents before AIM can interfere.

When you land in the Snowy Tundra, you’ll likely find this area familiar. That’s because it was the location of the third story mission, Beta Mission 3: Missing Links.

Use your tactical awareness and you’ll find two side objectives. Let’s get those out of the way before heading to the Vault.

The first side objective we’re going to take on is the one to the right.

Inside is a chest with a piece of gear and some resources. Let’s go after the other side objective now.

Use tactical awareness to find this side objective’s waypoint and head that way.

Fortunately, there are no puzzles to be solved at this waypoint — just a chest with some resources and an upgrade module waiting for you.

Now that you’re deeper into the level, you should see some additional side objective waypoints that have popped up. Let’s grab those.

Let’s head to the ones nearly straight ahead. They’re closer than the other two to your left.

The first side objective you’ll likely run into over here is the special enemy unit that needs to be destroyed. Take it out to complete this side mission. It has a strong shield so make sure to use Power Attacks to get past that and be careful as its electrical arms hit hard and heavy.

We got an Upgrade Module and an Epic piece of gear when we defeated the special enemy unit. Let’s go after the next two objectives nearby.

At this objective, you’ll find a SHIELD ally trapped in a box. To open the box and rescue the ally, you need to destroy two cylinders keeping the box locked.

You can see what they look like in the screenshot below. Destroy them to rescue the ally and complete this objective.

About 50 meters away, you should spot a chest marked by a waypoint.

Climb up the cliff and open it to find some resources and a Rare piece of gear.

From up where you are now, you should be able to spot your next objective. Let’s head there.

As you get closer, you’ll see that there are actually five additional side objectives. Let’s head to the one on the right in the screenshot below.

When you get closer to this waypoint, you’ll see that it’s a chest a few stories up high.

Climb the stairs up to it and open it to find some Nanites and Uru.

There is another chest right by the previous one. It’s to the right. Head over there, climb up the structure and open the chest at the top to get some Units, Uru and a Rare piece of gear. You can ignore the enemies as you climb up toward the chest.

We’re now going to head to the waypoint roughly 100 meters away, as seen in the screenshot below.

When you arrive, you’ll be at a building.

Defeat the enemies here and then look for the piece of machinery in the screenshot below. Punch it three times or until the hexagon turns blue.

That will open the door to the chest inside. Open the chest to get some Units, Uru, and a Rare piece of gear. Let’s head to the next objective. It’s the one closest to us from here.

When you arrive at the building with this waypoint, head to the backside of it. Look for the yellow circle and punch it.

This will open the door that leads to the chest. Open the chest to get some Units, Uru, and an Uncommon piece of gear.

Let’s head to the next waypoint about 100 meters away.

When you arrive at this waypoint, take out the enemies.

You’ll see that the chest is a story or two up but you’ll find that you can’t reach it no matter how high you jump. Instead, look right and climb up the cliffs so that you’re high enough that you can jump to where the chest is. Open the chest to get some Units, Uru, and a Rare piece of gear as well as the Marvels of AIM collectible.

The final side objective waypoint is about 200 meters away from where you are now. Head that way.

When you arrive at this building, you’ll be swarmed with exploding synthoids. Take them out and clear the rest of this area. Now, head to the back of the building and you’ll see the two machines below. Punch them both three times or until the hexagon turns blue (the one on the right in the screenshot below is pre-punch and the one on the left has been punched three times).

Then, punch the third one nearby and on the left side of the building (if you’re looking at it from the front), there is a fourth and final machine to punch. After doing so, the door to the gold chest will open.

You’ll get a comic book, upgrade module, rare gear and some Units. Open the other chest in this room as well for some additional resources.

With all of the side objectives out of our way, we can finally track down that vault. Look at the wayfinder in the upper left corner of the screen and follow that until it reaches 0 meters.

When it reaches 0 meters, that means you have arrived at the destination. When you reach the 0 meters point, you should find yourself in front of the SHIELD door below.

Interact with the nearby mechanism and head inside. Take the elevator down.

Head deeper into the Vault and you’ll find the actual vault where the treasure lies. We can’t access it yet though. Instead, interact with the machine Jarvis has played a waypoint on.

Now you need to complete code verification to unlock the contents of the vault. You’ll see a waypoint pop up: it’s random and could be any number, 1-5. What you need to do here is all the same, regardless of what pops up. Go to the number and you’ll find a square. Stand in that square until Jarvis can access it — this will take about 3 seconds.

In the upper left corner of the screen, you’ll see two numbers and a timer. You must let Jarvis access both of the number terminals before the timer runs out. You can generally ignore the enemies during all of this.

After doing the first two numbers, head back to the vault.

Stay in this square, taking out all of the enemies that threaten to remove you from it, until the blue bar in the upper lefthand corner of the screen is full.

After that’s complete, count that as one of three times you will need to do that entire process. Each time, one additional number terminal will be added to the process so you’ll need to be faster about locating each number terminal’s square as you progress in the process.

When you’re ready to complete the mission, interact with the green-screened computer and you’ll be taken back to the Quinjet. You should receive an Epic piece of gear for completing the mission.

You cannot return to the Snowy Tundra at this point. If you wish to do that, you’ll need to repeat this entire Secret Beta Mission process all over again. That means finding the Vault Resource in the Sabotage Threat Sector: Stark Realities again.