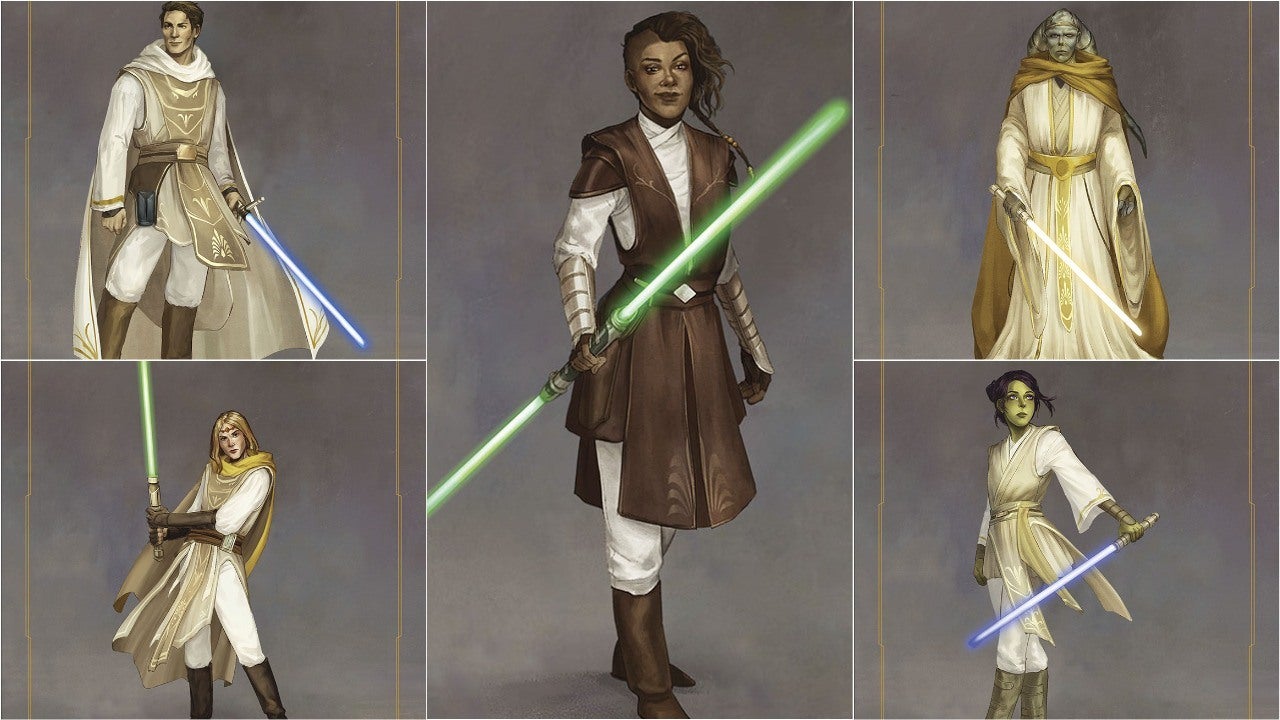 April 7, 2020 Off By tracy
Though Lucasfilm teased some of the main characters that will be featured in the upcoming Star Wars: The High Republic publishing initiative when it was revealed in February, now they’ve fully pulled back the curtain on five brand new Jedi heroes on StarWars.com.The High Republic is an era of peace and prosperity when the Jedi were in their prime some 200 years before the events of the Skywalker Saga. “For over a thousand generations, the Jedi Knights were the guardians of peace and justice,” Obi-Wan Kenobi told a young Luke Skywalker once upon a time. And now, through a series of novels, young adult books, junior novels, and comics we’re going to explore it for the first time. There is no single main protagonist in The High Republic, but rather a whole cast of characters who will pop up in the various stories. These five are only some of the new faces we’ll be meeting for the first time.Though this is a time of relative peace before the Galactic Civil War that ignited during the Prequels, that doesn’t mean there aren’t dangers. The villainous Nihil are space vikings who pose a threat to the entire galaxy thanks to their unique ability to disrupt hyperspace travel. These are the Jedi Knights and Masters who will stand against them in the High Republic era.

“Readers will see a very wide variety of Jedi in this era,” said Lucasfilm Publishing creative director Michael Siglain on StarWars.com. “This is a hopeful, optimistic time, when the Jedi are good and noble, and we want to reflect that in their characters while still giving them enough depth and dimension so that their individual personalities and idiosyncrasies shine through. The Jedi Knights of the High Republic are both aspirational and inspirational. In short, they’re the good guys.”

Though the Jedi are mighty, all of these news characters were crafted to be flawed and “human” just like anyone else.

“We’ve put a lot of time and effort into making our Jedi feel like real, rounded individuals,” explained Cavan Scott, writer of the Star Wars: The High Republic comic series for Marvel Comics. “They are all different, approaching the Force in individual and unique ways and yet are united with a common goal. They serve not out of unwavering dogma, but a deep passion to protect light and life. And they’re all at different stages in their individual journeys. Some have experience on their side, some have the exuberance of youth. Some are still finding their place in the Order while others step naturally into leadership roles. Some may not have chosen to work with the Jedi they’ve been posted alongside, but all are dedicated to be a guiding light for the galaxy. Individually they are strong, together they are invincible, but like the best heroes they each have lessons to learn and challenges to overcome. Exciting times lie ahead.”

With that in mind, let’s meet these new Jedi.

You can check out the new Jedi by flipping through the slideshow below or keep scrolling for the article.

Avar Kriss wields a green lightsaber and is described as the brightest and most noble example of what it means to be a Jedi. If there were a Captain America among these new Jedi, she’d be it. She’s optimistic, self-sacrificing, and an inspiration to those around her. She goes by her sense of compassion rather than the dogma of the Jedi. She’s enthusiastic about living on the frontier of unexplored space and the new adventures it brings. (That’s right, the galaxy isn’t as well-explored during this time, so locations familiar to fans might not have been discovered yet.) She is literally described as “the best of the best.” And it looks like the Nihil are about to put that to the test.

Where to Find Her: Star Wars: The High Republic – Light of the Jedi novel by Charles Soule

Loden Greatstorm may have a glum look on his face but don’t let that fool you, he’s described as having a good sense of humor. This Twi-lek Jedi Master uses a beautiful yellow blade and is renowned as one of the best teachers in the Jedi Order who is always looking for ways to improve himself and the Padawans under his tutelage. Think of him as Yoda, but taller!

Where to Find Him: Star Wars: The High Republic – Light of the Jedi novel by Charles Soule

Keeve Trennis is the new kid on the block and comes armed with a green double-bladed lightsaber. Only a Jedi Knight for a matter of weeks, she’s described as a quick-witted and impulsive with a promising future, if only she can trust in herself as much as she trusts in the Force. Keeve finds herself starstruck working alongside living legends like Avar Kriss and wants nothing more than to prove herself. To keep the Marvel metaphor going, she sounds a lot like Peter Parker when he first met his idol Tony Stark. She’s stationed on the Starlight Beacon, a space station that acts as a galactic hub and a main setting in the High Republic era, and she’s immediately tossed into the deep end when the Nihil bring about the Great Disaster — a catastrophic, inciting event that throws the galaxy into chaos.

Where to Find Her: Star Wars: The High Republic comic by Cavan Scott

Speaking of all these new lightsabers, check out our video breaking down why they look a little different than you might expect:

Stellan Gios is not unlike Avar Kriss in that he’s a Jedi Master described as optimistic and well-respected. Stellan and Avar came up through the Jedi Order together, and while they don’t always wind up on the same assignment, when they do pair together they make one heck of a powerhouse team. But it sounds like we might have to wait to see the duo in action together, as the description on StarWars.com says Stellan is currently stationed at a Jedi Temple on the distant planet of Caragon-Viner. We hope that’s at least a place where he can put that cool Excalibur-esque, metal crossguard lightsaber to good use.

Where to Find Him: Currently unknown

Vernestra “Vern” Rwoh was Padawan to Stellan Gios but is now a freshly minted Jedi Knight. In fact, at age 16 she’s one of the youngest Knights in a generation. She’s described as someone who works harder than most people her age, and she struggles to fit in with adults while also trying to be a role model for younger Jedi. So pretty much Hermione Granger with a violet lightsaber.

Where to Find Her: Star Wars: The High Republic – A Test of Courage junior novel by Justina Ireland

Joshua is Senior Features Editor at IGN. If Pokemon, Green Lantern, or Game of Thrones are frequently used words in your vocabulary, you’ll want to follow him on Twitter @JoshuaYehl and IGN.