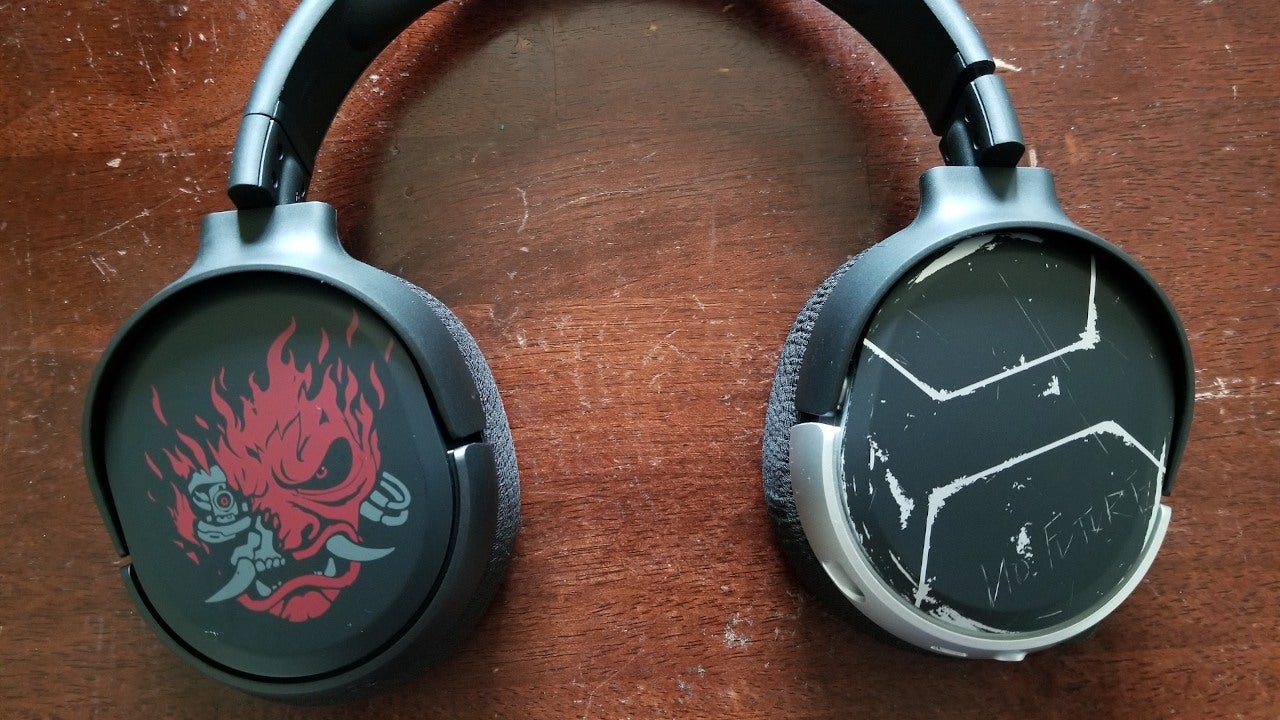 May 20, 2020 Off By tracy
SteelSeries is known for producing solid gaming headsets, and the company’s Arctis line is especially great. Durable frames, high level of comfort, that signature Arctis sound – there’s a reason a bunch of them landed on our Best Gaming Headsets of 2020 list.Take the Arctis 1 Wireless Xbox Johnny Silverhand Edition headset for example. At first glance, it offers more of the same; this limited model features all the bells and whistles we’ve come to expect from the Arctis line. That said, some slight tweaks to its design make it more compatible with Microsoft’s console this time around – including compatibility with the upcoming Xbox Series X.

SteelSeries’ Arctis 1 Wireless Xbox headset is similar to the one we reviewed last year. It still has a steel-based headband wrapped in plastic and foam. The frame applies slight pressure for a snug fit while the soft, padded cushions hug the ears for extra stability. A detachable mic extends from the left cup, connecting right above several important features. They include a Micro-USB jack for charging, a standard 3.5 mm audio jack, the volume wheel and a microphone mute switch. The right cup houses the power button and LED that indicates connectivity and overall battery life.

Again, these basic design elements can be found in the previous model. That’s not a bad thing mind you. The frame is sturdy. Built with durability in mind, it feels solid enough to survive a fall from a computer desk or short table. And while the steel headband isn’t very flexible, the pressure it places on the ears is reasonable. As someone who’s sensitive to that sort of thing, I can’t stress enough how important this is. No one wants to wear an uncomfortable pair of cans. Thankfully, the Arctis 1 is all about comfort; its extremely soft ear cushions can attest to that.

The Arctis 1 feels great to wear. They’re also rather easy to use. It only takes a second or two to raise the speaker volume and/or mute via the left cup. Long pressing the power button (on the right cup) turns the headset off and on. A short press will answer/end calls or play/pause music; skipping between the next and previous track requires double and triple presses, respectively.

Connecting wirelessly to various devices is also a breeze. This is thanks to that the aforementioned tweaks and multiple connecting cables. The PS4, Nintendo Switch, PC, and Android devices – sans Samsung phones prior to the Galaxy Note 10, which lack voice functionality via USB-C – utilize the Arctis 1 wireless dongle. This is done by either connecting the dongle to a device’s USB-C port directly or by using the USB-A adapter cable. The same goes for the Xbox One. Previously, you’d have to connect the headset to an Xbox One controller using a 3.5 mm audio cable. That’s not the case anymore. Just simply shift the wireless dongle’s mode to Xbox, connect it to the USB-A adapter, plug it into the console and you’re off to the races.

The Arctis 1 Wireless Xbox headset is great in terms of form and function. I’d be remiss if I didn’t bring up the flashy decorations on the unit I tested. Inspired by Keanu Reeves’ Cyberpunk 2077 character, the Johnny Silverhand special edition is uniquely stylized. Half black, half chrome (or silver), each earcup seems to visually showcase Johnny’s human and cybernetic sides. The right cup is adorned with an Oni Demon – part cyborg as well – while the left is chromed out, the words “No Future” are scratched into the frame.

Everything from the Samurai headband to the silver mic arm screams Cyberpunk. Even the inside of the ear cups is stylized, featuring an Arasaka – a megacorporation found in the upcoming game – logo and serial number. Basically, the cool design should resonate with Cyberpunk fans.

Like previous Arctis headsets, this one features SteelSeries’ high-performance speaker drivers. Their purpose is to provide pertinent details during play. You won’t get a true 7.1 surround sound experience. But you will be able to pinpoint a rival’s location in Call of Duty: Warzone by the sound of their footsteps.

Being able to hear where enemies are is important. Being able to communicate that information to your peers is even more so. The Arctis 1’s 2.4 Ghz wireless connection and ClearCast mic help in this regard. For one, the connection was always solid. I never had to deal with latency issues or choppy audio regardless of what I was doing during play. Even when I went upstairs towards the back of my house, away from my Xbox, I was still able to hear my friends in private chat. My friends could also hear me thanks to the ClearCast mic. Made with a bidirectional design, the mic was great at picking up my voice while ignoring background noises; my teammates couldn’t hear my kids running around while we played various games.

The same could be said when playing on other devices. Especially on my PC, where I could use its sound settings and/or the SteelSeries Engine 3 software to tweak my experience. Which actually brings to me my only complaint: the inability to address sound issues on the Xbox One. There were times when a game’s sounds would drown out portions of the chat. Gunfire, loud music, explosions – whenever things got really exciting, I’d have a hard time hearing anyone who was speaking lower than usual. And because the headset doesn’t differentiate/split the game audio from voice chat, cranking up the volume only made things worse.

To be fair, this issue had more to do with the console than the SteelSeries’ headset. That’s because there’s no menu option to change the volume when connected wirelessly. If you connect it to an Xbox One controller via the 3.5 mm audio cable, an audio option pops up under settings that allows you to adjust how much of the game’s audio is heard over chat. That doesn’t happen when connected through the wireless dongle. Outside of changing the stereo settings – choosing audio formats like Dolby Atmos – and tweaking the mic’s output, you’re pretty much stuck with a shared audio experience. That’s not the case with the PS4 though. On Sony’s console, you can toggle between having all of the audio or just the chat coming through your speakers when using the headset wirelessly.

The limited edition SteelSeries Arctis 1 Wireless Xbox Johnny Silverhand Edition is compatible with PC, PS4, Android phones (with a USB-C port), Nintendo Switch, and Xbox – both the Xbox One and the upcoming Xbox Series X. It can be found at Best Buy or direct from SteelSeries with an MSRP of $109. The regular edition is available without the Cyberpunk branding for $10 less.