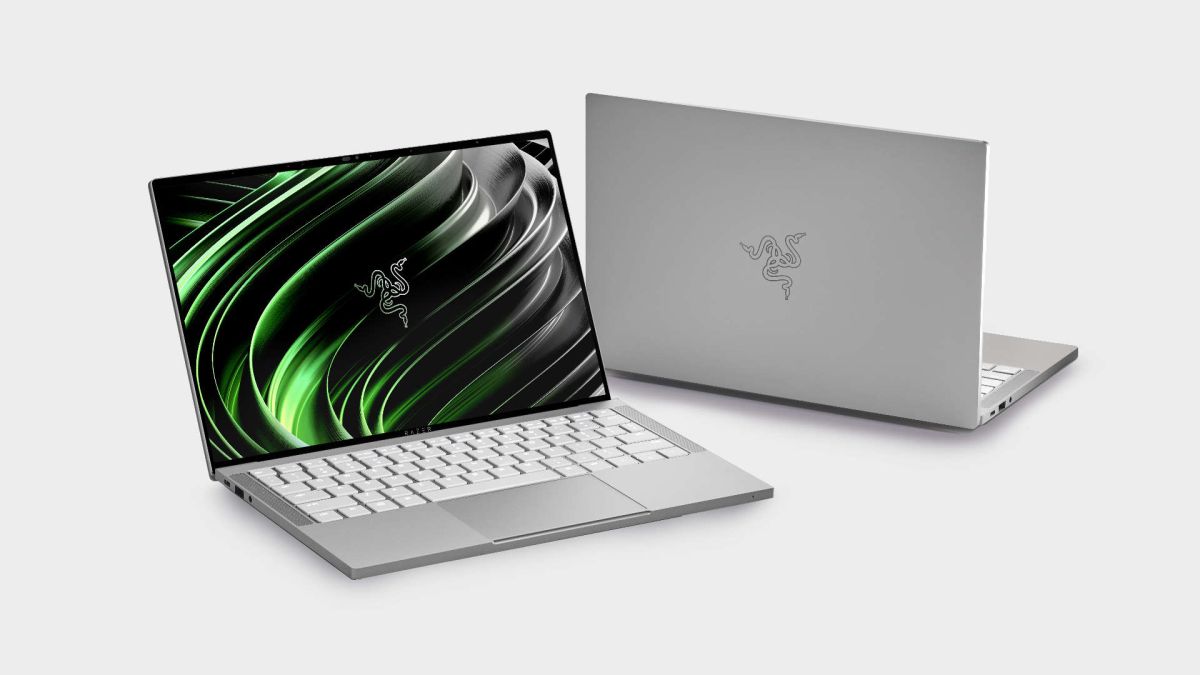 Razer is coming at us today with the new Razer Book 13, which, according to the press release is a Tiger Lake laptop aimed at “go-getters, side-hustlers, and spirited entrepreneurs.” So, it may be time to get excited if you happen to be one, or more, of the above.

The way they’ve described it makes it sound like a piece of fine art sculpture. It’s “carved from a single block of aluminum,” and “anodized with a mercury white finish.” But, this lightweight, aluminium chassis means the Razer Book 13 models weigh around the 3lb mark, and are just over half an inch thick. To top off the light and sleek look Razer is going for, the 13.4 inch panels are skirted by apparently the “world’s thinnest display bezels”.

Which all is to say it looks a lot like an Apple MacBook Pro.

The specs follow two main configurations: Option one is an Intel Core i5 1135G7, with 2.4GHz base frequency and 3.8GHz boost clock. This comes with 8GB LPDDR4 memory, but is only available with a 256GB PCIe M.2 SSD, and is devoid of touchscreen tech and Gorilla Glass for the FHD display.

Option two comes with an Intel Core i7 1165G7 models boast 2.8GHz/4.7GHz base/boost frequencies, respectively, with 16GB LPDDR4 memory, and either 256GB or 512GB SSD PCIe M.2 storage. The i7 model also comes with Gorilla Glass 6, complete with anti-glare and touch technology, but only the 512GB version will feature a UHD 4K panel. This model will also see around three hours less battery life than the less powerful model.

Each new Razer Book 13 will come with two USB-C Thunderbolt 4 ports, a single USB-A 3.2 Gen2 port, and one HDMI 2.0 port, as well as the latest Wi-Fi 6 and Bluetooth 5.1. The 3.5mm combo audio port supports THX Spatial Audio, which is also available through the upward-firing side speakers, powered with smart-amp technology. If you’re going to be attempting to game on it, the keyboard features anti-ghosting tech, and the keys are all lit up with Razers signature Chroma lighting.

The release of the new Razer Book 13 appears to be a clever play by Razer to snatch up the MacBook market with an Intel-powered alternative to the company’s ARM-powered devices, rumoured to be arriving next week.

Since Apple plans to dump Intel, Razer is going to be right at the forefront with these new touchscreen Tiger Lake laptops, which will be available sometime later this month. The Core i5 model will start at $1,200 and the Core i7 model around $1,600.