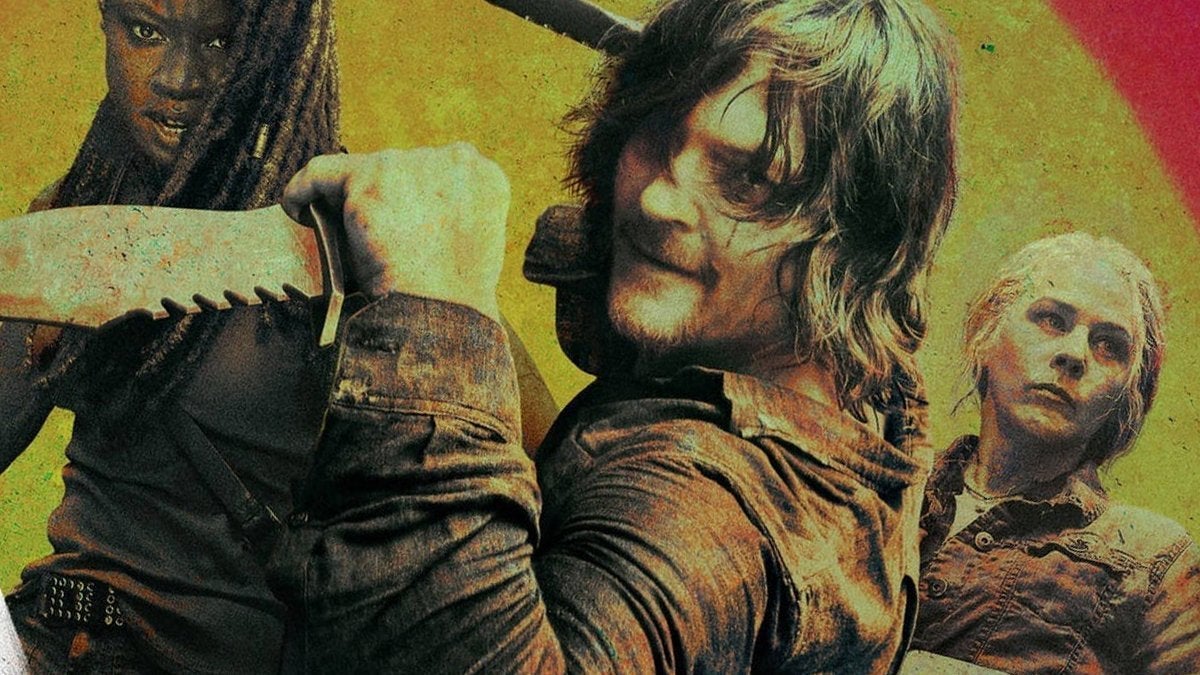 March 23, 2020 Off By tracy
With tonight’s Walking Dead episode “What We Become” marking star Danai Gurira’s final appearance on the series as Michonne (as she and the character head off into the Rick Grimes movie trilogy), both Gurira and Walking Dead Chief Content Officer Scott M. Gimple appeared on AMC’s Talking Dead after show to discuss the episode and Michonne’s surreal “Sliding Doors”-style exit.Despite her character not dying, and living on to exist in a different Walking Dead property, Gurira was still, understandably, emotional about this episode. “It’s overwhelming, in a sense, to have walked on this journey with this amazing character and this amazing family, the Walking Dead family out there in Georgia, for all these years.”

“[The episode] was an insane mind trip in so many ways,” Gurira said, though she was hesitant to give this alternate Michonne a label. “I don’t know if I’d call her evil, but she made a different choice at a pivotal moment. And there’s this crazy aspect of how this one choice can send you on entirely different path.”

Gimple then spoke about what he and the writers wanted to convey with Michonne’s final chapter on the show. “At the end of the day, we wanted to give an idea of what the point of the whole thing was,” he shared. “The whole journey. And she enters the story by helping someone. She chose to stop and turn and help a stranger. Over the course of seven seasons she changed. She became vulnerable. She opened up. Now, in this episode, she has a lead on Rick, which is earth-shaking. It changes everything. She has to go. And even as she does that she crosses people who need help. And we see that’s who she really is now. Even though she’s on the most important journey of her life.”

Gurira was asked about recreating several moments from the show’s past, including the infamous Negan lineup. “[Michonne] could have chosen to let Andrea die. She was in this moment where she was very disconnected from her humanity. Just one little knock on her heart got through her armor and she saved Andrea and everything changed. But she could have done what we watched in this episode. I found that very chilling. One choice compounds upon itself. And the very idea that she ends up with Negan felt plausible.”

“Just the aspect of being aligned with Negan, I think that alone was freaky,” she said. “[Jeffrey Dean Morgan] and I had this bizarrely good time but you’re just still freaked out that you’re doing that as an actor. But it was all plausible. The idea that there was a part of her, if she’d gone a different way, that made their connection plausible. It was a chilling thing. We spent a lot of time shooting that lineup scene originally. That scene was deeply traumatic, you know, losing Glenn and losing Abraham, and so to recreate it and to be on the other side of it…we set it up in the exact same place, the RV was behind us, and there was Negan with the bat. Everything was very chillingly the same as that night except I was batting on the other side. It was deeply trippy.”

The Walking Dead: “What We Become” Photos

What’s Next for Michonne

While Michonne’s move to the Rick movies hasn’t been made official, it’s one of the worst kept Walking Dead secrets at this point. And Gimple, while not being able to say anything outright, certainly teased as much.

“I can say this: Both Rick Grimes and Andy Lincoln would not give up those boots very easily,” he said. “There’s the etching. There’s a Japanese phrase there. There’s Michonne, and there looks to be a more current Judith than perhaps Rick…yeah, there you go. Is he alive? Is he dead? What’s the situation. Those are clues that there’s a whole story unfolding somewhere.”

When Michonne saw those boots, she confronted a part of herself that she had to bury long ago. “[Seeing Rick’s boots] feeds something inside of her that she’s tried to keep down for many years, that she put aside for the good of everyone around her,” Gurira said. “It was an awesome thing for me to see Michonne get back. To get connected to him again to have some of her hunches start to be validated.”

“[Rick leaving] was last year for us, as viewers of The Walking Dead, but for Michonne it’s been years,” Gimple added. “To see this, it just pulls her through time. It’s a whole other world.”

“Her story isn’t done,” Gimple concluded. “And the thing we were so happy to find, thematically, was we were able to conclude the character. Michonne is the person who would help those people at the end, even though she has no idea who they are. And they have this weird fashion sense. And she has a lead on Rick. And we see this group, this organized, nomadic, strong-looking group. And she’s going to them on behalf of these other people. Something’s going on here. It was great to see the character fulfill her arc in the story while also opening up a whole other story while on the road to a story we want to know more about, which is Rick.”