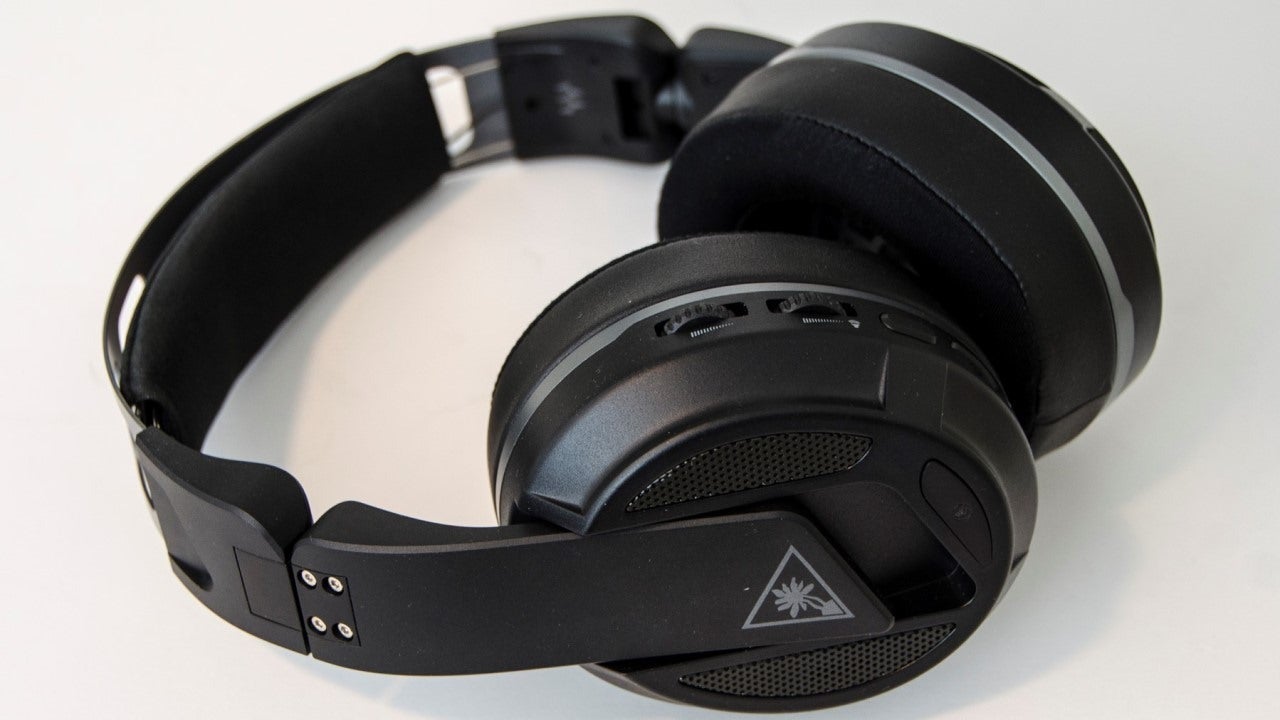 March 11, 2020 Off By tracy
Last year, Turtle Beach introduced the Elite Atlas, a solid mid-range wired gaming headset for $100. Now, the gaming audio company has taken that original Elite Atlas and stirred the pot a bit. Turtle Beach retained the Atlas’s 50mm drivers, made it wireless, added a desktop control panel for the PC, and called the new creation the Elite Atlas Aero. Priced at $150, it’s treading into somewhat pricey territory, but is still far more affordable than flagship wireless headsets like the Sennheiser GSP 670 and the HyperX Cloud Orbit S. That puts the Elite Atlas Aero squarely in the sights of gamers who want to step up to a wireless headset, but not have to step down to budget audio performance in the process. Let’s see how well it holds up.

Turtle Beach clearly wants you to be impressed with the Elite Atlas Aero’s portability from the first moment you open the box. It comes folded for travel, with both earcups hinged to collapse tightly against the headband and, in this compacted state, measures barely five by eight inches. And no fear about losing the USB wireless dongle. Pop off the right earbud – it comes off easily – and you’ll find a small cubby to store it when you take the headphones on the go. Unfortunately, Turtle Beach doesn’t lean into this a little more by including any sort of carrying case, but even so it’s highly portable.

Unfold the headphones from their travel posture, and you’ll find it’s a beefy rig. The headband is quite wide, suggesting it’ll fit any size head with relative ease. The earcups are generously padded with memory foam, and they slide up and down, with the adjustment rod in the side of the cups rather than built into the band above – just one of a number of ways the design of the Aero has been updated from the Elite Atlas.

The earbuds pivot to conform perfectly to the side of your head, and the top of your skull never comes in direct contact with the metal headband; a soft cushion floats just under the band, like headphones that rely entirely on a floaty self-adjusting headband for adjustment. Between the earcup adjustments, memory foam, and headband, this is one supremely comfortable rig.

Turtle Beach has another creature comfort of sorts built into the Aero: an eyeglass relief valve. Pop off the earpads to locate a small strap you can pull to create an indent in the headphones that eases the pressure on your eyeglass frames. Dubbed the ProSpecs Glasses Relief System, it works super easily and creates a channel into which your eyeglasses fit. I’ve never really been bothered by headphones pressing in on my eyeglass frames, but if this is a pet peeve for you, Turtle Beach has you covered.

Unfortunately, Turtle Beach squanders all goodwill with a set of on-ear controls so clunky I can only assume the engineers did no usability testing. The back of the left earcup is home to a recessed power button, raised quick-access button, and two separate volume dials, all within two and a half inches of one another. There’s also a microphone mute button on the outer cup. The left ear also has the microphone input, wired audio jack, and micro-USB charging port. It’s a busy place.

Too busy. For starters, the quick-access button is simply too close to the power button. Despite the fact that one is recessed and the other is raised, I powered-down the headphones during gameplay numerous times, since it only requires a tap to turn off, rather than holding it in for a few seconds (which you need to do to turn it on).

And then there are the twin volume dials. One controls the master volume and the other is bindable to a half-dozen volume tasks, but regardless, I fumbled over the two constantly. Both dials spin almost frictionlessly, so it’s super easy to screw up your volume just feeling around for the controls. The volume dials need to be much, much stiffer, especially given their proximity to each other and the other controls.

The microphone, on the other hand, is superb. It’s removable and has a flexible stem that stays exactly where you put it.

The headphones are built around 50mm drivers, which Turtle Beach calls Nanoclear speakers, and claims to have 30 hours of battery life between charges. The package includes a two-foot micro-USB cable (the headphones don’t support USB-C charging), and a six-foot 3.5mm audio cable for wired operations with a Mac or PC, Xbox One, PS4, and Switch, and probably anything else you can get audio out of. For wireless, it’s limited to Mac and PC.

One thing you won’t find is any lighting. Personally, I don’t mind that at all, because you can’t see lighting when you’re wearing the headphones anyway, and this means every dollar went into the sound of the cans rather than the way they look to whoever else in the room.

Turtle Beach’s all-new Control Studio desktop software is packed with features, and it really looks that way. That’s not a compliment. The Dashboard tab has more sliders than a gastropub at happy hour, and there’s seemingly no effort to organize or streamline the controls. You’ll find no fewer than eight sliders to control things like treble, bass, game dialog, and mic dialog, along with more geeky settings like the noise gate threshold and variable mic monitoring (you can thankfully turn on tooltips to explain what these controls do). They all blur together into one bland grid of buttons and dials. Esport veterans might revel in the rich configurability of it all, but the presentation is sure to overwhelm more casual gamers.

You can enable 3D audio – which generates a synthetic surround sound effect – or the game spatializer. The dashboard also lets you enable “Superhuman Hearing,” a feature that’s similar to SoundBlaster’s Scout mode, which emphasizes footsteps and other environmental sounds to help you detect distant enemies before they come into range.

If the dashboard seems daunting, the Audio Settings tab will be equally intimidating. Here you’ll find a 10-band graphic equalizer with presets for gaming, chat, and microphone equalization. One nice touch: the EQ labels various frequencies for game effects like rumble, explosions, car engines, vocals, and wind, so you can relate the equalizer to actual sound effects.

I used Call of Duty: Modern Warfare to put the Elite Atlas Aero through its paces, along with some Wolfenstein II: The New Colossus, and an old favorite, Homeworld. I was eager to see how Superhuman Hearing worked in shooters, and there’s no question that it makes a huge difference. With that enabled, every footstep and gunshot is accentuated, and turning it off made the game feel somehow incomplete. Just like SoundBlaster’s Scout mode, my general assessment is that once you try it, you won’t want to play without it.

I especially liked the fact that you can independently control the volume of the Superhuman Hearing with the secondary volume dial, so you can balance the audio during gameplay. Unfortunately, this is also where the cluster of controls gets in the way, because I always ended up pressing or turning something by accident when I reached back there to fiddle with the volume.

There’s no advantage to using Superhuman Hearing in a strategy game like Homeworld, so I experimented with the 3D audio here instead. Whether the 3D sound was on or off, the lush, orchestral soundtrack sounded wonderful, with a full response from deep bass to high treble. But turning on the 3D mode was surprisingly effective, adding a fuller, more immersive feel to the game. You definitely don’t want to use this 3D mode on games in which positional audio is important – I accidentally left it on in Wolfenstein, and discovered, as you’d expect, that it was impossible to assess where sounds were originating.

I don’t ask a lot from a gaming mic, and the Elite Atlas Aero’s microphone checks all the boxes and then some. In-game audio quality was (reported) to be perfectly fine, and I further tested it by using it to record some podcast promos using Audacity. Turtle Beach’s noise cancelling TruSpeak tech was solid, and gave me results that rivaled what I typically get with my Blue Yeti and some foam baffling.

With 30 hours of battery life, I ended up wearing the headphones all day long for days at a time, and alternated gameplay and music. I still prefer my AKG studio reference headphones for music in general, but these headphones delivered a solid musical experience – especially after I tweaked the equalizer a little. I was worried that these would be strongly biased towards bass response, but that wasn’t the case, and I could appreciate highly textured, acoustic tracks like Peter Himmelman’s “Impermanent Things” just as well as Black Rebel Motorcycle Club’s raucous “Half-State.”