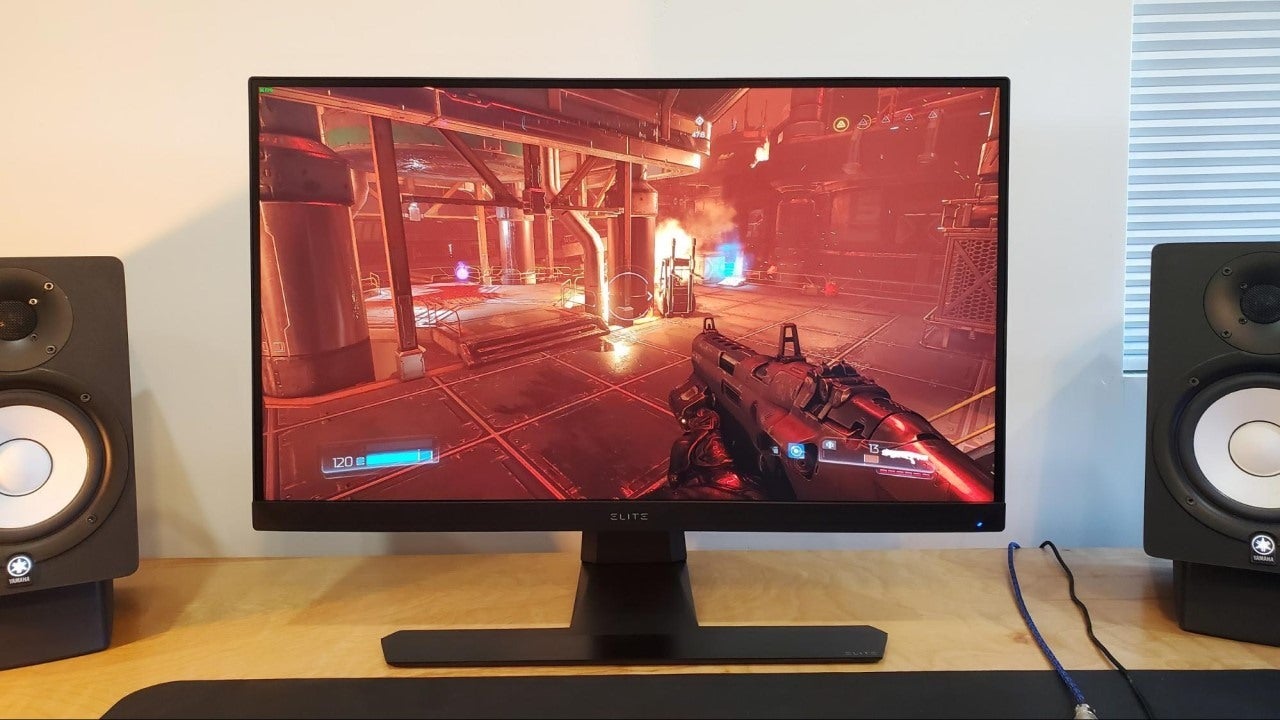 July 15, 2020 Off By tracy
With today’s gaming monitors, you generally have to make a choice: go all-out on 4K resolution with a slower refresh rate, or opt for the smoothest possible motion with a 1080p, 240Hz display. The $599 ViewSonic Elite XG270QG aims for a sweet spot between these two options, with a 27-inch 1440p panel overclockable to a very smooth 165Hz. We took it for a test drive to see how it fared.

The Elite XG270QG feels like it’s designed to be a gaming display for adults: the subtle trapezoidal stand makes it clear it isn’t just about business, but an all-black finish with clean lines ensure no one’s going to confuse it with a UFO. The stand is a bit deeper than I’d like, so watch out if you have a shallow desk. The stand does, however, allow for height, tilt, and swivel adjustments – all the way to portrait mode, if that’s your thing. The frameless bezel keeps the edges sleek, and the built-in cable management panel is a nice touch if you want to keep the rear end neat and tidy. The IO provides one DisplayPort 1.2 port and one HDMI 1.4 port, along with three USB ports and an audio out. I’m a little surprised that it only includes two video ports given the price, but most users probably won’t use more than one anyway. It does come with optional focus panels for the sides, and a little headphone hook that flips out on the left – neither are crucial, but they’re niceties that help make the monitor feel more premium.

RGB lights on the back give you the opportunity to reflect a little light off your wall and your desk – the monitor comes with a few built-in patterns like “breathing” and “rainbow,” but ViewSonic’s software provides many more options if you want to customize the lighting to match your PC. If you aren’t a fan of colored lights, I recommend turning it white rather than turning it off altogether – a little bias lighting will help make the otherwise “meh” black levels look deeper.

Mediocre blacks are to be expected with an IPS display like this, though, and it’s one of the only major downsides I could find. The 1440p resolution is plenty for its 27-inch size, and it comes with a G-Sync capable 144Hz refresh rate that’s overclockable to 165Hz – not the fastest on the market, but smooth enough for the vast majority of gamers to appreciate. When you enable overclocking from the on-screen menu, ViewSonic warns that the monitor may get hot, flicker, or have other problems, but after running this thing at 165Hz nonstop since I set it up, I haven’t had any issues yet. (And while it’s a G-Sync monitor, it also worked beautifully in FreeSync mode with my AMD RX 580 graphics card.)

The on-screen display, controllable with a joystick-style button on the bottom of the panel, doesn’t have too many other options beyond the usual: brightness, contrast, built-in color profiles, and a few crosshair settings. There is an overdrive setting and a “ULMB” motion blur reduction feature, though the latter is only available at 120Hz, locks the overdrive setting, and is incompatible with G-Sync, which makes it less than desirable for most people. The default settings worked well for me, so you shouldn’t have to mess with too much here. You can just flip it on, adjust your resolution and refresh rate, and get straight to gaming.

All monitors we review at IGN go through a series of Lagom’s LCD test patterns to see how the panel stands up to scrutiny. The XG270QG performed very admirably, with Gamma clocking in right at the desired 2.2, no visible banding in a black-to-white gradient, and the fantastic viewing angles you’d expect from an IPS display. Black and white levels were right where they should be, with each shade being clearly distinguishable from the next, though as I mentioned earlier the blacks aren’t very deep. Again, the built-in bias lighting will help a little with that, and it’s a worthy tradeoff for the other benefits IPS panels provide.

Response time was particularly impressive. Lagom’s test patterns use a GIF that flips pixels between two shades at a rapid pace – if the response time is slow, you’ll see distinct flickering, while fast response times will produce a grey square with little movement. At 165Hz, none of the squares showed noticeable flickering, meaning you’re unlikely to see much ghosting on moving images in games. I confirmed this with Blur Busters’ UFO test, which was smooth as butter with almost no ghosting. It still has an overdrive setting designed to improve response time further, but I found that it produced very noticeable artifacts, so I recommend keeping it off, along with the Ultra Low Motion Blur (ULMB) setting. There is very little to complain about when it comes to this monitor’s performance, at least given the inherent limitations of an IPS panel with no local dimming or HDR.

While I’m often quick to find faults in picture quality, I had a hard time knocking on the XG270QG during my gaming sessions. The 165Hz refresh rate, coupled with a super-fast response time, makes for incredibly smooth motion, which is crucial in frantic games like Overwatch or Doom. It’s not quite on the level of a 240Hz display, but the difference is very small, and the increase in resolution is well worth the tradeoff for all but pro-level gamers. 1440p is plenty sharp at 27 inches, and if your graphics card can drive that many pixels 165 times per second, you’re in for a real treat.

The color temperature seemed a tad warm, but a small adjustment on the OSD helped even things out. I also noticed a tiny bit of IPS glow along the bottom of the display, particularly during cutscenes with black bars. During actual gameplay, it wasn’t really noticeable, and it was actually far less than I’ve seen on other similar displays – but it is still there, and could vary from unit to unit. Just keep that in mind if you play a lot of cinematic games or watch movies on your monitor.

The biggest downside of this panel is its cost. At $599, it’s fairly expensive, especially when compared to similarly-specced monitors like the $429 Asus TUF Gaming VG27AQ or the $480 LG Ultragear 27GL850-B. (Sometimes the ViewSonic costs as high as $780, depending on price fluctuations.) ViewSonic’s offering does have an official G-Sync module (rather than G-Sync compatible FreeSync), plus the higher refresh rate and built-in RGB, so you’ll have to decide how much you’re willing to pay for those extras. If you have the budget, though, it’s a fantastic monitor that checks all the right boxes.

The ViewSonic Elite XG270QG is available on Amazon with an MSRP of $599.

CategoryHardware
PES 2021 to Be a Budget ‘Season Update’, PES 2022 to Use Unreal Engine [Updated]
Paper Mario: The Origami King Review – Just Above The Fold