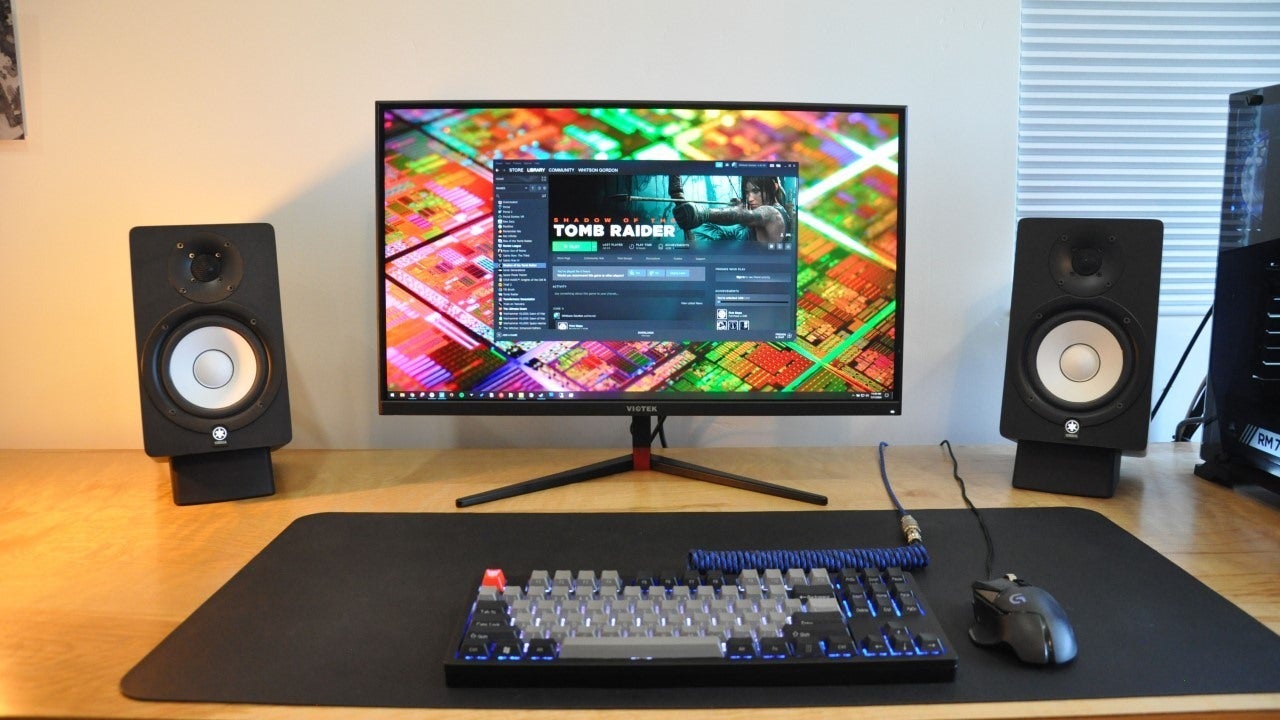 August 26, 2020 Off By tracy
4K displays have been around for a few years now, and 144Hz has long been a drool-worthy spec for the best gaming monitors. But for the most part, gamers have had to choose one or the other: 4K for stunningly sharp visuals, or high refresh rates for super-smooth gameplay. That’s finally starting to change, and the Viotek GFI27QXA brings this combo down to a more accessible price point.

The 27-inch, $750 Viotek GFI27QXA has a distinct gamer-esque design without being too over-the-top. The stand sports a few red accents along the top and bottom, with a triangular base and a red LED light on the back that bounces off the wall for a subtle glow. The red light has a few customizations available in the monitor’s settings menu, but you can’t change its color, so if you’re looking for something that matches the rest of your gear…well, I hope it’s red.

The monitor isn’t completely frameless, but the edges of the screen are nearly flush with the thin angled bezels, giving it a sleek look nonetheless. The monitor is height, swivel, and tilt-adjustable for optimal ergonomics, but there’s no cable management to speak of. You do, however, get a five-part focus shield in the box, if that’s your jam. (I generally prefer to leave it off.)

The 4K, IPS panel ticks a lot of boxes, but there are a few caveats. Out of the box, it offers a 120Hz refresh rate with G-Sync compatible FreeSync and HDR400. That’s pretty much the bare minimum for HDR, and without more brightness or local dimming, you won’t get stunning dynamic range out of this display – though I still find HDR to be better than SDR in games that support it.

Those are the base specs, but if you can turn on the technically-an-overclock “144Hz Mode” from the on-screen display, you can crank the refresh rate up further. You will, however, need two DisplayPort cables to be plugged in for 4K at 144Hz, and you won’t be able to use HDR or FreeSync in this mode. That means you have to choose between HDR/FreeSync and 144Hz for any given game, and switching out of 144Hz mode does sometimes confuse the display – I found I had to unplug one of the DisplayPort cables to get my desktop back – so switching between the two modes isn’t exactly seamless. Many other 4K 144Hz monitors have their own similar bandwidth limitations, including Acer’s $1129 XB273K and $829 XV273K, both of which are more expensive than Viotek’s offering. So while this downside isn’t specific to Viotek, it is still rather annoying.

The rear IO contains the two necessary DisplayPort 1.4 connections for that 144Hz mode, as well as two HDMI 2.0 ports (which each max out at 4K 60Hz). You also get a headphone jack and a small power input, which sadly requires a large brick under your desk. It also comes with a surprising amount of settings to tweak, including a picture-in-picture mode if you want to game and chat with friends at the same time, or something of that nature.

I ran the GFI27QXA through a number of tests, using an X-Rite i1Display Pro and DisplayCal software to judge color accuracy and gamma, along with Lagom’s LCD patterns to judge its other abilities by eye. The monitor’s OSD, while a bit annoying to navigate with the monitor’s individual buttons – at this price, I’d really prefer a joystick-style switch – is chock full of different options. You get traditional color modes and brightness/contrast/saturation settings as well as individual tweaks like dynamic contrast ratio, noise reduction, and motion blur reduction.

My measurements showed this monitor covers all of the sRGB color space and 90.4% of the wider DCI-P3 color space, which is quite impressive. That makes for extremely vivid colors, though it also means things may look a bit oversaturated in SDR content. This is common with wide gamut monitors during this period of transition between standards, and for typical desktop work and gaming, most people probably may actually enjoy the more striking colors, even if they aren’t quite “correct.” I just wouldn’t count on this display for any color-sensitive work, especially since it doesn’t have an sRGB mode for a more accurate color space. I also found red was boosted a bit too high on my unit, making people’s skin look almost sunburned, though backing the red down one notch in the OSD helped a little.

Brightness came in at 422 nits, just over the 400 nits required for HDR400 certification. Gamma hovered right around the desired 2.2, deviating from the curve just a bit at the low and high ends. Black levels aren’t particularly deep thanks to the IPS panel – if you play in the dark, blacks will look a bit grey – but the monitor brings out subtle low-lights well thanks to its clearly delineated black level steps. White saturation was a bit high in my tests, with bright highlights bleeding into “true white” just a tad too much – though you might be able to adjust brightness and contrast to help remedy this. Gradients showed no visible banding.

This monitor’s response time was solid. Lagom’s test shows a number of squares that quickly shift from one shade of grey to another – if this shift produces flickering, then that particular transition is slow on the display in question, and will likely lead to ghosting in games and movies. The GFI27QXA only showed very mild flickering in the first three squares, which is great compared to many slower VA panels out there. The monitor’s overdrive feature, labeled simply “Response Time” in the OSD, is designed to improve this even further – but it’s broken on this display, only affecting the right half of the screen (one of the weirder bugs I’ve seen in my years testing monitors, but the manufacturer confirmed it is a problem with the panel they’re using). As a result, I recommend leaving the Response Time feature off. I found I didn’t need it anyway, despite being rather sensitive to motion blur, though particularly discerning eyes may find that to be a deal breaker. The MPRT feature also aims to eliminate motion blur, though it introduces noticeable image-doubling artifacts that, in my opinion, are worse than blur. Try it on and off to see which you prefer.

Finally, viewing angles were superb, thanks to the IPS panel, and FreeSync worked admirably in my tests, even with an Nvidia graphics card (which is to be expected given that Viotek advertises G-Sync Compatibility).

When it comes to gaming, let’s get the obvious out of the way: getting 144Hz at 4K isn’t easy in modern AAA titles, even if you have a super high-end graphics card. If your game offers resolution scaling, I recommend turning it on to get better performance while keeping the game UI as sharp as possible. Even if your games aren’t in true 4K, the high resolution display makes the Windows desktop look great, and some may require a 4K display for things like video editing – though again, this monitor probably isn’t ideal for color-sensitive work unless you have the gear to calibrate it.

One could also make the argument that high-end specs like this futureproof you for the day when 4K 144Hz becomes more common, even if you can’t run games at those specs right now. I’m not sure buying this monitor on its future performance alone is the most economical use of your money, though – you’d be better off sticking with a 1440p display for the time being, and buying 4K when it becomes cheaper down the line. All that is to say, paying extra for 4K 144Hz is a bit of a tough sell right now.

Still, it’s hard to ignore the beauty of 144Hz at high resolutions. The super-smooth motion blends perfectly with the fast-paced action of games like Doom Eternal, allowing quick reaction times and ultra-smooth motion with very little blur mucking up your vision. The Dynamic Resolution Scale feature was particularly useful, ensuring I always kept up 144Hz while scaling the resolution as high as possible when there was less work taxing my graphics card.

In other games, refresh rate is a bit less important, and I’m willing to drop out of 144Hz mode to get HDR and Freesync. Again, while HDR400 is near-bottom of the barrel as far as HDR is concerned, it does look slightly better in games that use it well – in Shadow of the Tomb Raider, for example, HDR produces a more noticeable difference between dark and light areas of a scene, and really lends to the ambiance in caves and tombs when sun shines through the cracks. (It also produces less oversaturated colors, since HDR is designed to use that wide gamut properly.) And since I’m basically guaranteed lower framerates in that demanding of a game, FreeSync becomes a lot more useful to reduce tearing. Again, though, switching between the two modes is quirky at best, so it’s not something I’d really enjoy doing on the regular.

Finally, like other IPS displays, I did notice a bit of uneven glow on the edges of the screen, though on my review unit, it was mostly on the left side – so it was only visible during complete fades to black. Your particular unit may differ.

The Viotek GFI27QXA is available on Amazon with an MSRP of $749.

Making The Witcher: A Behind-the-Scenes Special Now Streaming on Netflix