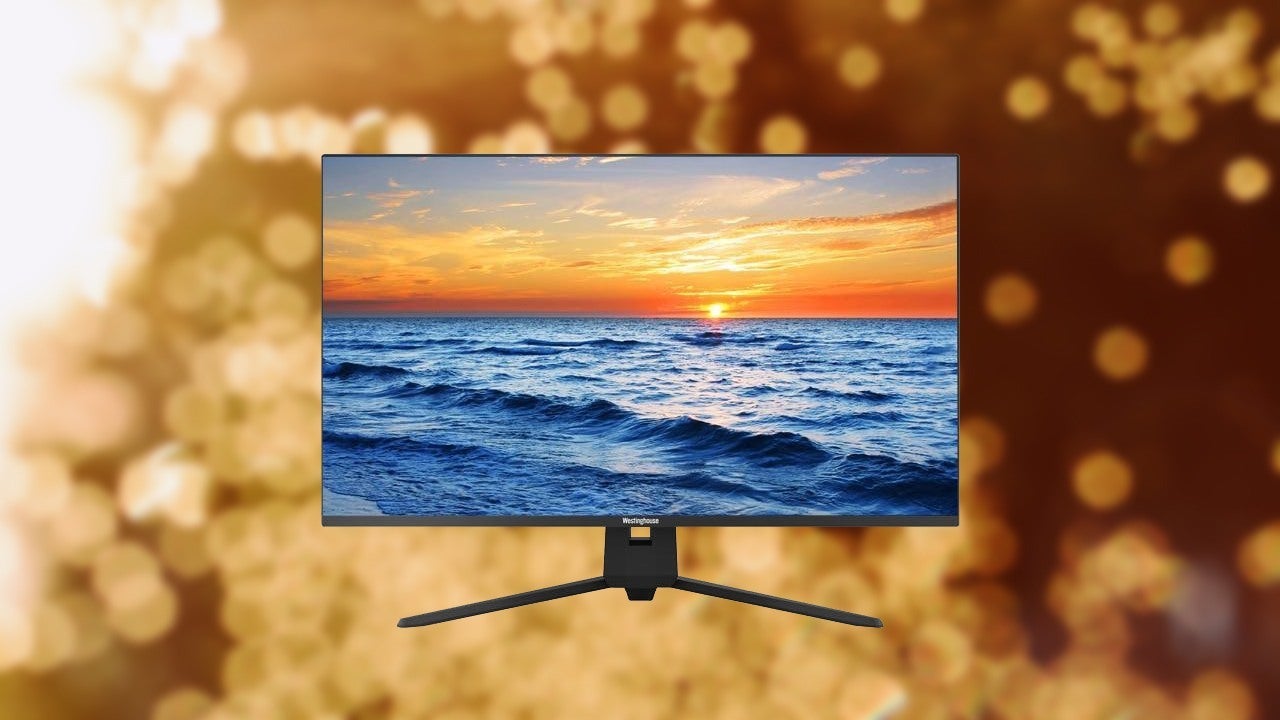 Westinghouse has been in the display-manufacturing game for years, particularly in the realm of budget TVs and PC monitors. The company’s latest 32-inch 4K monitor aims to keep this pattern, offering a large, ultra-sharp screen at a surprisingly low price of $350 (see it at Amazon). So is it a budget behemoth or a high-def dud?

Westinghouse calls the WH32UX9019 a “Home & Office” monitor, rather than a gaming monitor, and the design and specs back that up. While the sharp, angled stand is slightly reminiscent of some modern gaming displays, the overall aesthetic is sleek and free of colored accents or RGB lights.

It has a frameless design, with only a tiny bezel along the edges – though the display doesn’t stretch all the way, leaving a small black bar around the desktop that promotional photos do not show). It’s remarkably thin, with just a slim protrusion on the back where the IO resides. The stand has a small cable management opening, and the screen tilts back and forth – though sadly, it doesn’t offer height or swivel adjustments.

Ordinarily, I’d complain about the lack of adjustment, but for a monitor this large, it doesn’t matter as much, since it takes up much of your field of view. And frankly, the 32-inch VA panel is quite pretty – games and desktop windows are sharp as can be at 4K, and the colors are beautiful. The standard 16:9 aspect ratio is great for gaming and movies alike, and the IO provides one DisplayPort and two HDMI inputs, along with two USB 3.0 ports if you want to use it as a hub.

But as you’d guess by looking at the price, Westinghouse has cut a number of corners to keep this monitor affordable. The brightness is only 220 nits by Westinghouse’s own spec sheet – enough for gaming in a dark room, but not ideal if you have sun streaming through the window next to you.

The on-screen display isn’t exactly rife with options, and uses the standard five button navigation on the rear of the display. Arguably most important is the refresh rate – only 60Hz, with no G-Sync or FreeSync support – and the 8ms response time. These are less than ideal specs for gaming, which isn’t surprising since it isn’t really billed as a gaming display.

To judge this monitor’s abilities, I ran it through some of Lagom’s LCD test patterns. Black and white levels were close to where they should be, although there was a small amount of crushing in each test – the darkest and brightest squares on the screen were indistinguishable from the reference black and white, respectively, which may prevent you from seeing certain shadow or highlight details in an image. Gamma clocked in at the desired 2.2, and gradients showed no visible banding.

Viewing angles were not ideal, as you’d expect from a VA panel – and on a monitor this big, it’s nearly impossible to adjust it in a way where you won’t get some slight color shifting on one side of the display. For example, when watching a movie, you may find that the black bar at the bottom is slightly lighter than the black bar at the top – though it’s not so bad that it’s constantly distracting.

In addition, while VA panels have their advantages (better black levels than IPS panels, and better color accuracy than TN panels), they tend to fall behind in response time – the amount of time it takes for a pixel to shift from one shade to another. Westinghouse says this panel comes in at 8ms, which is on the higher side, and can cause ghosting during movies and games.

To test response time, Lagom uses a GIF with a number of squares shifting between two colors – if it can’t switch fast enough, you’ll see flickering. As expected, Westinghouse’s display produced heavy flickering in half the squares, and Blur Busters’ UFO Ghosting Test confirmed the issue, producing significant motion blur behind the UFO as it moved against a dark background. Unlike many gaming displays, Westinghouse offers no Overdrive setting or similar adjustments to alleviate the problem, so you’re basically stuck with it.

As someone who usually games on a 24-inch monitor, I’m always wowed by 32-inch displays like this one – no matter how many I review, it’s always exciting to step up in size. The resolution and color on WH32UX9019 produces a great looking picture on the desktop, and still or slow-moving images in a game look absolutely fantastic.

But once you introduce a bit of motion, that high response time makes itself apparent. The opening level in Shadow of the Tomb Raider, for example, sees Lara climbing through a narrow cavern with a flashlight, and every time the camera pans quickly or her arm swings up to the next rock, there’s a noticeable blurry trail behind the movement. It’s worse in darker scenes, but I found it noticeable everywhere, even in Overwatch’s more brightly-colored maps.

This problem is only exacerbated by the slower 60Hz refresh rate, which – while not terrible (60 fps is still better than most console gaming) – is starting to become the bare minimum with so many 75Hz, 144Hz, and even 240Hz panels on the market.

And that’s the main sticking point here. Westinghouse has clearly provided a pretty killer price for what you get – you won’t find many other 32-inch, 4K monitors for this little money – but the value just isn’t there for gaming.

For a similar amount of cash, you could get the 32-inch LG 32GK650F-B, which brings the resolution down to 2560×1440 (or “2K”) while cranking the refresh rate up to 144Hz with FreeSync and motion blur reduction – all of which are far more noticeable improvements than going from 2K to 4K.

If you absolutely need a 4K screen – maybe you’re editing 4K videos in addition to gaming – then this monitor will serve you well on a budget. But if you primarily need a monitor for gaming, you can do better.

The Westinghouse WH32UX9019 is available now for $349 at major retailers, such as Amazon. Though you’ll find it going for a slightly lower $289 at Newegg.