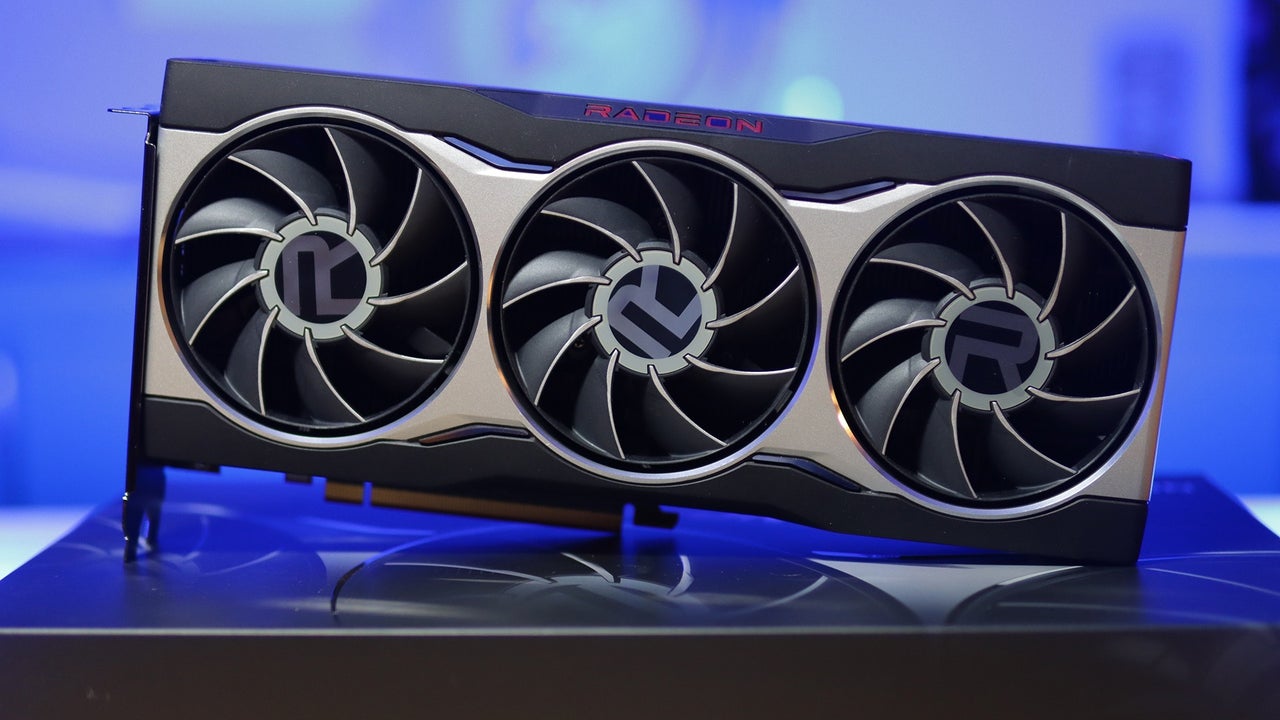 November 18, 2020 Off By tracy
Navi 2.0 has landed, and that means it’s time to break down exactly how these exciting new graphics cards perform. We’ve already looked at the AMD Radeon RX 6800 XT, and now it’s time to take a close look at its younger sibling, the Radon RX 6800. Coming to market at $499, it’s competing directly with the Nvidia RTX 3070. Does it have what it takes to earn a place on your holiday wishlist?

Like the RX 6800 XT, the Radeon RX 6800 has undergone a radical redesign this generation. The loud blower-style coolers of yesteryear have been left in the dust of the much more stylish and effective triple-fan cooler found here. Visually, the design is extremely similar to the RX 6800 XT, and there’s a real sense of style that stands apart from even many third-party cards. The mix of silver, black, and mirror finishes really makes the card stand out while also avoiding the garrishness of overdone RGB. I said the XT-version reminded me of a cross between a muscle car and spaceship and I stand by that here. Where the RTX 3000-series looks minimalist and utilitarian, the RX 6000 series goes for flash.The biggest difference between the two cards is their thickness. As the lower powered of the two cards, the thermal load is naturally going to be less, so AMD was able to equip it with a standard two-slot heat sink. This is good news if your gaming PC also has internal sound or capture card because it will allow for more room to draw cool air through its fin stack.

Otherwise the two cards are nearly identical on the outside. The RX 6800 is still powered by dual eight-pin PSU connectors (no proprietary headers here!), as well as the same array of video outputs: 2x DisplayPort 1.4 outputs, each offering Display Stream Compression for those 4K HDR gaming monitors, one HDMI 2.1 output, and a USB Type-C output for easily connecting a virtual reality headset. Who said USB-C out on graphics cards was dead?

It’s only once you look under the hood that the differences begin to stand out. Like the RX 6800 XT, this card is built on AMD’s 7nm process and features the same 26.8 billion transistor count, but it features a trimmed back processor and clock speed. In total, it packs 3840 stream processors and 60 compute units, each with its own Ray Tracing Accelerator for hardware-based ray tracing. This is roughly 17% less each, while also being 50% more than last generation’s AMD Radeon RX 5700 XT. Given the relative performance of each card, that actually lines up quite well.

When it comes to clock speeds, the RX 6800 features a “Game Clock” of 1815MHz and a Boost Clock of 2105MHz. Again, this is a more modest promise than the 2015 MHz and 2205MHz of the RX 6800 XT, but a noteworthy improvement over the RX 5700 XT’s 1755MHz and 1905MHz. As has been the case for years, these figures should be taken with a grain of salt as each card will intelligently ramp itself up beyond these limits so long as it stays within acceptable power and thermal limits. For example, when gaming, my sample would routinely clock itself up to 2275 MHz and hover there. It’s not quite the 150MHz boost I found on the RX 6800 XT, but the top speed remains impressive compared to Nvidia’s current RTX 3000 line-up, which often hover between 1900 – 2000MHz.

Another highlight the RX 6800 shares with the RX 6800 XT is its large store of video memory. Each card features 16GB of GDDR6 VRAM on a 256-bit bus. With a bandwidth of 512 GB/s, it’s a far cry from the ridiculous 760 GB/s speeds offered by the Nvidia RTX 3080’s GDDR6X, but is perfectly sufficient for 4K gaming. Since this card is squarely targeting 1440p, standard GDDR6 is a good choice, as is the generous capacity featured on both cards. Compared to the 10GB on the RTX 3080 and 8GB on the RTX 3070, 16 gigabytes feels downright exorbitant and offers the kind of headroom that will give both RX 6000-series cards ample headroom for the advanced textures and graphical effects always around the next bend in PC gaming.

Of course, the Radeon RX 6800 also brings with it all of the improvements of AMD’s new RDNA 2 architecture. I give a thorough breakdown of the improvements in my review of the RX 6800 XT, so you can read the full breakdown there, but there are a few important high points that allow this card to be more than meets the eye.

First, instead of using a dedicated core just for ray tracing, each compute unit has its own ray tracing accelerator. Every clock cycle, each CU is able to process four ray intersections. This allows the system to be scalable while also offering a massive improvement over software level ray tracing. Additionally, you should be aware that RDNA leverages Microsoft’s DirectX ray tracing solution, DXR, and not RTX. That’s important, because certain games that are designed explicitly for RTX will not work on the RX 6800 or 6800 XT.

Second, each announced RX 6000-series card features a brand new store of GPU-level memory called Infinity Cache. This cache allows the GPU to store important data rather than pull on the VRAM, which reduces latency and increases effective bandwidth. This memory store is also a key reason for the impressive clock speeds the GPU is able to deliver, and aids in the increased performance per watt. This card, despite being far more advanced than the RX 5700 XT, has a TDP of only 250 watts, 25 watts higher than the 5700 XT.

Third, the RX 6000-series is synergistic with the Ryzen 5000 CPU platform through a new system called Smart Access Memory. If you’re running one of AMD’s latest Ryzen CPUs on a 500-series motherboard, your CPU will be able to access all 16GB of the RX 6800’s VRAM for a boost in performance. AMD claims this averages to about 6% but can be more depending on the game in question (their documents show Forza Horizon 4 receiving a 15% improvement at 1440p, for example). Since our test bench is built on the Intel platform, I wasn’t able to test this for myself, but it’s reasonable to expect a modest performance bump by the function of this new system.

There is lots more to RDNA 2, including game- and performance-enhancing features like Radeon Boost and Radeon Anti-Lag, as well as boons to content creators like HEVC encoding/decoding and AV1 decoding, so be sure to head over to the RX 6800 XT review and take a look.

With all of that preliminary information out of the way, it’s time to take a look at how the card actually performs. All of our cards are put through a series of synthetic tests and real world gaming benchmarks. Since AMD seemed to be taking aim at the RTX 3070, I’ll be focusing mainly on 4K and 1440p gameplay, but also note 1080p results in our initial game tests.

As I mentioned above, our system is unable to take advantage of Smart Access Memory, so if you’re running a system composed of a Ryzen 5000 processor, AMD 500 motherboard, and RX 6000 GPU, you can expect a roughly 6% increase in performance.

Looking at synthetic benchmarks, the RX 6800 performs very well. It outperforms the RTX 3070 handily and comes in just below the RTX 3080.

Turning to ray tracing, I ran each card through Surgical Scalpels’ Boundary Benchmark as well as 3DMark’s Port Royal and Ray Tracing Tests. Here, the RX 6800 performs significantly below the RTX line-up and RX 6800 XT. This is to be expected because of its position on the product stack and, in the Boundary benchmark in particular, demonstrates the importance of a scaling solution like DLSS. Without that, the RX 6800 offered only 36% of the performance of the RTX 3070. In 3DMark’s ray tracing test, where neither card was able to benefit from DLSS, the results were closer, but the RTX 3070 still led the RX 6800 by 48%.

Since the card is positioned so directly against the RTX 3070, which was itself compared directly to the Nvidia RTX 2080 Ti, I opted to do some expanded testing, beginning with 4K. As you can see, in non-ray traced games, the card does a good job of keeping pace with the RTX 3070. In fact, removing Wolfenstein: Youngblood from all calculations (ray tracing is exclusive to Nvidia, so AMD’s figures are not comparable), it averages 10% faster than the RTX 3070 and only 15% slower than the RX 6800 XT. Once ray tracing is factored in and Nvidia’s cards are able to take advantage of DLSS, that lead evaporates. The average performance across all games (except Wolfenstein) puts it 12% slower than the RTX 3070.

Is it fair to compare ray tracing performance between AMD and Nvidia when RTX cards have DLSS and AMD cards do not? I would argue that it is as that is exactly what many gamers will do when considering between the two. AMD seems to know as much, because it’s developing its own answer to Nvidia’s AI upscaling system: FidelityFX Super Resolution, but little is known about this technology other than that it is in development. When it will arrive and how it will work is anyone’s guess. The reality of Nvidia’s lead is hard to ignore here because most games supporting ray tracing also support DLSS. Even though the RX 6800 offers good performance at 4K and below as we’ll see in a second, the absence of such a system is a significant drawback at launch.

Comparisons and resolution scaling aside, I was impressed at how well the RX 6800 was able to handle non-ray traced games at 4K resolution. In my testing, leaving ray tracing turned off increases FPS by 40-50%, allowing many games to perform near or even above 60 FPS.

Looking at 1440p, which I would argue is the target resolution for this card, we see a similar story in comparative performance, but here it’s even more valuable to look at the actual FPS in each game. Even with ray tracing turned on, most games I tested performed well above 60 FPS. Of those that fell below, two were very close (Metro Exodus averaged 55 FPS, Battlefield V was 57) and only two were unplayably low: Control and Minecraft RTX.

It’s also worth calling out just how well Dirt 5 performed even without DLSS. Dirt 5 appears to be optimized for AMD, and the RX 6800 cleans the RTX 3070’s clock as a result. Given that current-gen consoles are also being built on the RDNA 2 architecture and will utilize ray tracing, I’m optimistic at what this means for the future of ray tracing on AMD cards.

Of course, if you’re not interested in ray tracing, these results are also very good news. If you’re gaming at 1440p with DXR disabled, the RX 6800 is able to run many games at or above 100 FPS.

The new triple fan design is an improvement versus the blower style cooler of the previous generation. In my testing, the RX 6800 reached a peak temperature of 80C. This is definitely warmer than Nvidia’s RTX 3000-series GPUs, but since AMD determines throttling based on a junction temperature (hottest spot on the die) of 110C, it didn’t actually result in any throttling that I observed. The card is also noticeably louder than Nvidia’s most recent cards, rising above my PC fans for a clear rise and fall as the card would spin up and down. In short, the thermal solution works, but still lags behind the competition in temperatures and acoustic performance.

The AMD Radeon RX 6800 is available for $499 at Amazon, Newegg, and direct from AMD however, expect stocks to be limited.