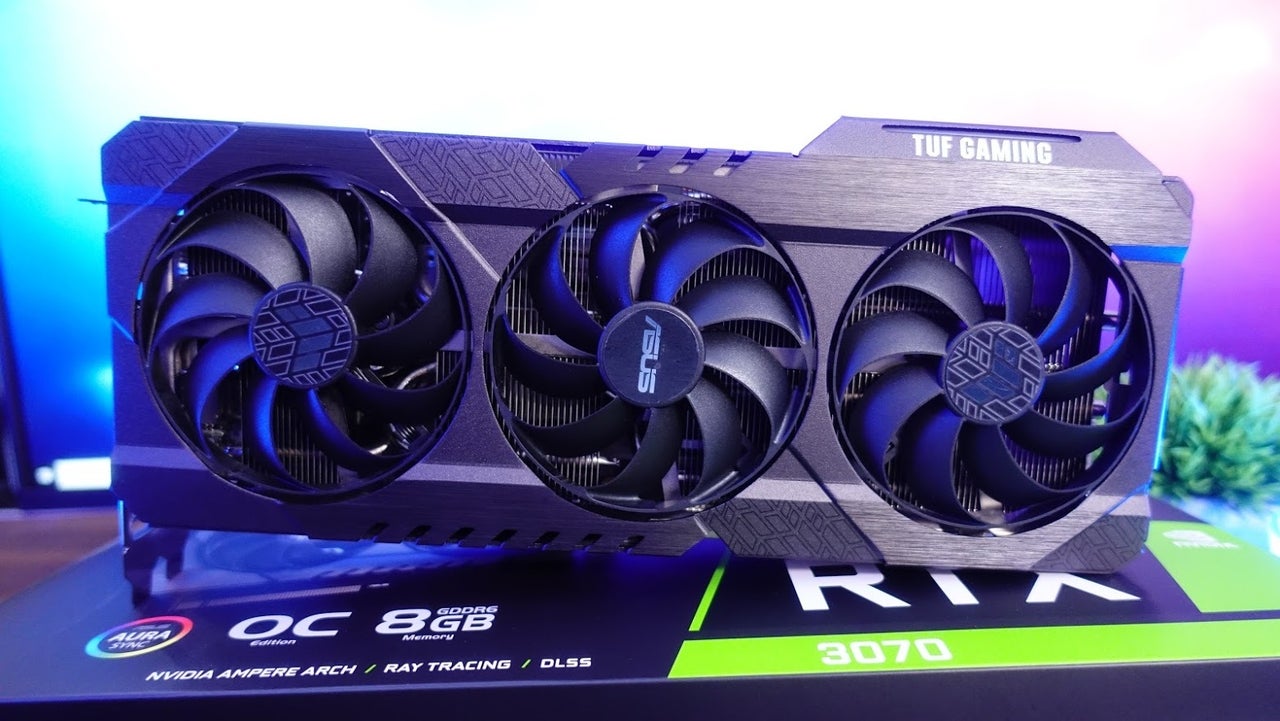 November 17, 2020 Off By tracy
The final entry in Nvidia’s 30-Series trio, the RTX 3070 Founders Edition, is officially in the wild, which means it’s time to start exploring third-party graphics cards. Which GPU offers the best combination of performance, cooling, and style to match your gaming rig? That’s exactly what I’ve set to find out. Today, I’m looking at the Asus RTX 3070 TUF Gaming OC. Coming to market at $539, it’s $40 more than the Founder’s Edition, but is it worth it?

While the RTX 3070 Founders Edition was almost cute with its tiny size, the Asus RTX 3070 TUF Gaming OC is downright beastly. It’s virtually identical to the Nvidia RTX 3080 of the same name (reviewed here). This works to its benefit, because that massive cooler doesn’t need to work so hard to keep this comparatively more tame GPU cool.

Like the RTX 3080 version, the TUF Gaming OC uses Asus’s axial tech cooling design. This system uses a triple fan solution with the middle fan spinning counter to the other two, reducing turbulence. It pairs those fans with a large, nearly triple-slot heatsink that’s been finely polished to increase surface contact for better dissipation. Around the back, the metal backplate features a series of cutouts to allow better airflow through the heatsink, seemingly taking a cue from Nvidia’s excellent dual-axial cooler found on its Founders Editions.

There’s also a dual bios switch, allowing you to boot the card into Performance or Quiet modes. Performance mode allows the fans to ramp a little higher while Quiet mode trades thermals for acoustics. I’ll never turn down extra options when it comes to GPU customization, but the addition of a Quiet Mode seems almost wasted here. Even in Performance Mode, the fans are incredibly quiet while gaming and it still kept the peak temperature to a low 66C. During normal browsing the card reliably hovers below its Fan Stop threshold so there’s no fan noise at all.

Taking the card as a whole, I love the overall design. The heavy use of brushed aluminum with the cybernetic overlays looks ridiculously chic. This is also a card that gamers not sold on RGB will be able to embrace as there is only a single RGB icon on the outer edge. It’s a far cry from the lengthy LED strip found on the MSI RTX 3070 Gaming X Trio. On the other hand, its placement is unideal if you do like RGB because the dual 8-pin PSU cables tend to obscure its glow.

Like all RTX 3070s, the Asus TUF Gaming OC packs all of the improvements of Ampere, which includes double the CUDA cores from last generation, 2nd generation RT cores, and 3rd generation tensor cores. I won’t rehash the entire architecture here (see the original review for that) but the important thing to know is that Ampere represents a significant leap over last generation’s Pascal architecture. This model in particular also packs an out-of-box boost clock of 1845MHz in OC mode, which is 115 MHz faster than the Founders Edition.

The other key thing to know about this card, and all RTX 3070s, is that they feature 8GB of GDDR6 VRAM. Not only does this offer significantly less bandwidth than the GDDR6X-powered RTX 3080 but also last generation’s flagship RTX 2080 Ti, which featured 11GB of video memory instead of the 8GB here. This is a significant difference if you plan to play games at 4K with max settings as many games are already perilously close to this limit without the aid of DLSS. As we saw with the RTX 3070 Founders Edition, when the frame buffer isn’t an issue, it can easily go toe to toe with the RTX 2080 Ti, but it will likely be the RTX 3070 that forces you to turn settings down first on the latest, most demanding games. It’s also worth noting that this limitation is especially remarkable given that AMD’s upcoming RX 6800 will feature double the VRAM for only $579.

Our graphics cards are put through a battery of real world and synthetic tests. These are conducted at all three major resolutions and, unless otherwise noted, are done with games running at their highest settings. RTX and DLSS are both enabled wherever possible with DLSS set to the Quality preset.

It’s important to note that some of the cards included in this testing are third party variants with factory overclocks. As generations progress, the amount of gamers running factory overclocked cards increases, making these representative samples. Still, bear in mind that these cards will run several percent faster than their reference-model counterparts.

Throughout the synthetic tests, the Asus RTX 3070 TUF Gaming OC went neck and neck with the RTX 2080 Ti, but fell slightly behind the RTX 3070 Founders Edition and MSI’s Gaming X Trio. Synthetic tests are primarily used to compare cards against one another but don’t always translate to real world performance. Let’s see how it stacks up there.

Between the three RTX 3070s, the results are incredibly similar across resolutions. Let’s take a look at 4K in particular, since the comparisons to the RTX 2080 Ti lend itself to that comparison.

This wider array of games really lays bare the differences — or, rather, the lack thereof. Compared to the RTX 2070, the TUF Gaming offered an average uplift of 37%. Against the RTX 2080 Ti, the scales tip the other direction, with it coming in 2% slower. Given the price differential, that remains remarkably good — assuming 8GB of VRAM is enough for the games and settings you would like to run.

It’s when we look at the RTX 3070 variants compared against each other that it becomes clear just how similar they are. This is true for two reasons. First, across each of the three RTX 3070s I’ve tested so far, the coolers have been more than sufficient to allow the cards to run at peak performance. Because of that, Nvidia’s GPU Boost reliably clocked each one higher than the rated boost clock and held its speed around between 1,900-1,950 MHz consistently.

The differences, then, really come down to looks and acoustics. Here, the TUF Gaming OC earns major points in my book. It looks great without being garish with its RGB and is remarkably quiet. Additionally, I appreciate that it features a dual BIOS option to make it quieter still while the other two cards did not.

The Asus RTX 3070 TUF Gaming OC is available for $539 at Newegg and other online retailers.