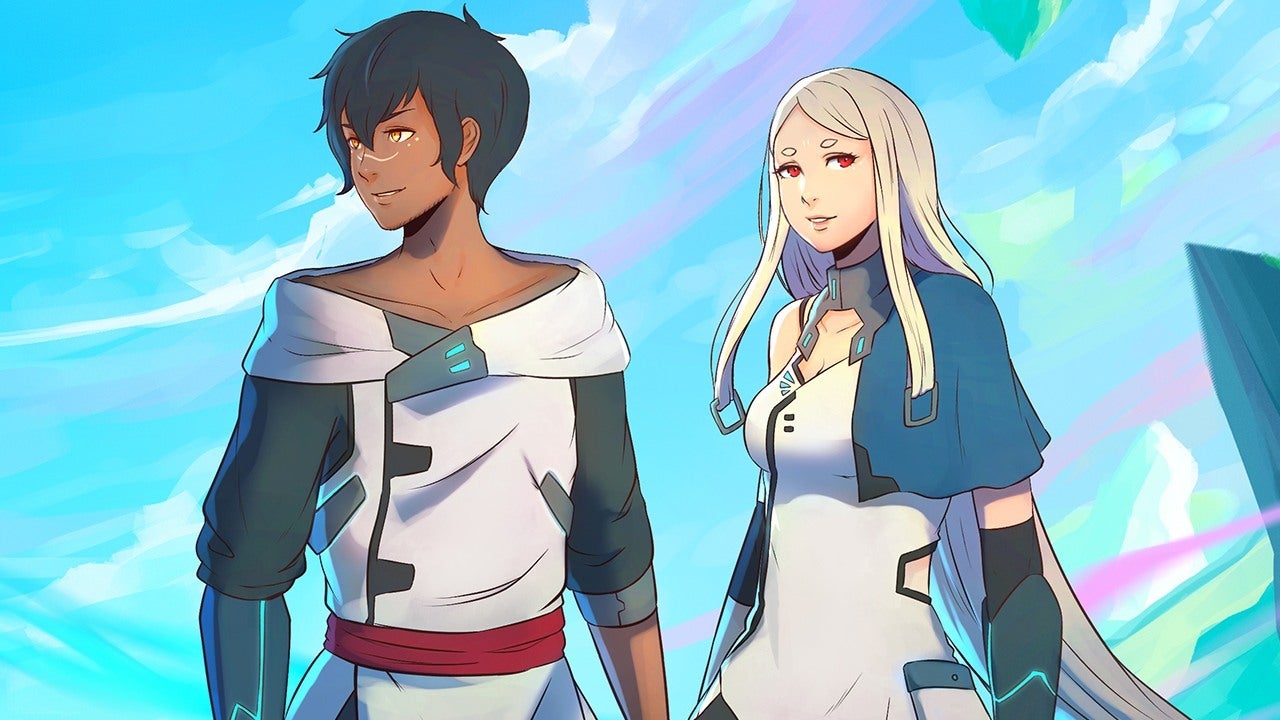 Support is essential in healthy relationships because no matter how turbulent shared lives can be, your partner is always there to offer a steady hand. Haven weaves that affection into a beautiful science-fiction RPG about the misadventures of two star-crossed lovers. Whether I was joyfully catching ethereal waves on anti-gravity boots, blitzing alien critters during exciting turn-based battles, or just zesting up meals, it was delightful witnessing its protagonists’ adorable relationship bleed into every activity. And those highs hit that much harder in the brilliant co-op mode. But every healthy relationship means being willing to put up with faults, and in Haven’s case that means turning a blind eye to long stretches of mandatory, monotonous resource gathering across barren landscapes.

Haven sets itself apart from many other spacefaring tales by opening on what feels like the second act of a story (without being confusing, thankfully). Yu and her boyfriend Kay have been gallivanting about celestial bodies searching for a new home, eventually settling on Source, the stunning watercolor-pastel planet where Haven takes place. It’s beautiful but also a dangerous, untamed frontier full of thunderous mid-air collisions between floating mountains and hostile wildlife eager to give outsiders a good thrashing. You’ll play as the couple (yes, both of them), exploring this strange, semi-open world in search of food and materials for the Nest, a cutesy nickname for the lovebirds’ spaceship. What’s particularly fun about Yu and Kay’s dynamic is either of them can take the lead: you can swap between them at any time, so choosing an expedition leader can be done in a snap.

This is no Death Stranding-style exploration game, though, because Yu and Kay sport anti-gravity boots that would blow Sam Porter Bridges’ mind. These miracles of athletic wear-meets-airliner let you glide across hayfields or soar into the high heavens. When they’re juiced-up, that is; Source has peculiar energy tendrils called flow threads all over its surface, and they charge the boots to allow you to access hard-to-reach areas. Riding these threads is like surfing – matching the flow’s trajectory is critical to avoid wiping out. From the get-go, I had a blast fishtailing on flow arcs, unsure of where a thread might take me but excited about what could potentially be at the destination. Sometimes, the path would lead to patches of rare berries ripe for the picking or, better yet, remnants from past explorers no longer in need of collectible doodads they left laying around.

Too often, though, flow threads go nowhere. Haven cuts its world into small, desolately sparse zones with little to do in them. Picking fruits and vegetables are the main activities you’ll partake in, and even that amounts to nothing besides scanning the horizon for static resource nodes and scampering up to collect the yummy goods once they’re spotted. It gets old, fast.What’s slightly more involved yet still miraculously dull as dirt is cleaning rust, a sludgy purple toxin covering most of the land. Cleaning involves brainlessly flying over corrupted areas, soaking up rust like a Roomba that’s regretting whatever life choices led it to this moment. You do this ad nauseam until every single solitary blade of grass is spotless, which wouldn’t be so bad if it was only a requirement once in a blue moon. However, there are over 40 zones to comb through, with most drenched in rust. You can’t ignore these chores despite how boring they are, either, as both food and rust are crucial to progression. Did we learn nothing from the chore-like mining of resources in Mass Effect 2?

Cleaning involves brainlessly flying over corrupted areas, soaking up rust like a Roomba.

After a long day’s work harvesting veggies or swabbing rust, few pursuits help Yu and Kay unwind quite like cooking or crafting their spoils back at the Nest. Not so much the literal mechanical process of mashing ingredients together (which is a straightforward dump-everything-into-the-pot-and-boil affair), but rather, how these innocuous tasks lead to the couple growing closer. Leveling up in Haven is entirely dependent on how well Yu and Kay jive, be it in the kitchen or workshop. For example, if Kay cooks fondue, which is one of Yu’s favorite dishes, they’ll both get experience points as a result of making each other happy. Conversely, Kay will be mighty appreciative of any stat-boosting trinkets Yu comes up with from welding rust together. The give and take of this relationship is governed by you, which works for me because it’s so satisfying seeing their love blossom from the fruits of your labor.

If a more traditional means of garnering experience is to your liking, then there are plenty of rousing turn-based tussles with ravenous rust-maddened beasties to be had. There are two types of offense at your disposal in Haven: flow projectiles and melee attacks. Enemies are always weak to one or the other, so you’ve got a 50% chance to figure out which.

There are plenty of rousing turn-based tussles with ravenous rust-maddened beasties to be had.

Delivering an ax-kick as Yu, then having Kay follow-up with a flow curveball never gets old due to the crunchiness factor. Attacks feel great, especially when one reveals an enemy’s weakness. Blocking incoming attacks has a sweet-tinge to it, too, as the couple will go out of their way to shield one another from foes. Better still, you can synergize them to unleash devastating combos, putting the recipient flat on their back. Then the time comes to perform a pacify skill, dousing your adversary in flow to relieve them of rust-infused rage rather than killing them. It’s not the most in-depth combat system, but having Yu and Kay’s harmony reflected even among chaotic brawls is so endearing.

While I spent the overwhelming majority of Haven’s roughly 15 hours in single-player, its creative local co-op mode etched out a decent chunk of my time, too. When you’re each controlling one character, decision making and combat actions are split straight down the middle between yourself and (hopefully) someone special. Sharing laughter with a loved one over what dialogue options to choose or which fork in the road to take is an utter joy. Sure, the shared camera can get a bit wonky if one of you strolls right while the other insists on going left, but it’s only an issue during exploration.

Combat faces no such camera woes, thankfully, even though it’s a smidge nerve racking relying on someone else for aid at first. But as the two of you start recognizing each other’s quirks while playing, cohesion begins to set in like a hilarious team-building exercise. It’s somewhat meta that Haven, which is about two characters growing closer, does precisely that in co-op with your real-life company.

What sets Haven apart from so many other games about romance is it’s not about the pursuit of love. By the time we meet Yu and Kay, they’re already together. And without getting into spoilers, they’ve gone to hell and back for the life they now share. I couldn’t help but see past relationships of mine reflected in their spur-of-the-moment interactions that pop up no matter what you’re doing. It’s relatable stuff. Kay roasts himself to make Yu giggle, whereas Yu coaxes out whatever might be bothering Kay a moment later. They fight, too. Every couple fights, after all. But even then, the two of them grow from it. Because despite how overpowering these feelings can be, if both parties work for it, love always prevails.