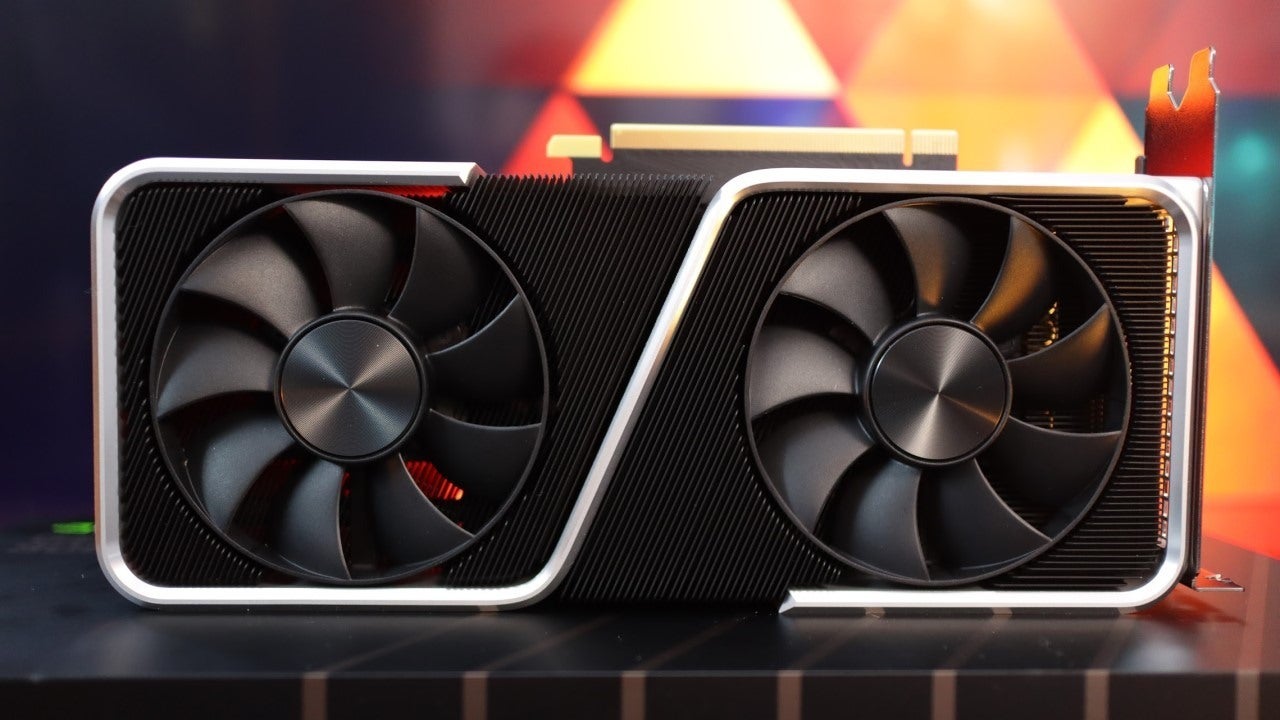 December 1, 2020 Off By tracy
With the initial trio out the door, Nvidia is ready to begin expanding its graphics card lineup. Today, we’re looking at the RTX 3060 Ti, and priced at only $399, it’s the most accessible 30-series GPU yet. If history is any indicator, it’s poised to be the most popular card of the generation, but does its performance match its pedigree?

Apart from a minor change in color, the RTX 3060 Ti is identical to the RTX 3070. While the heat fins are still matte black, it now features a silver frame that lends it a visually distinct look that also manages to be quite handsome. Like its more expensive sibling, the RTX 3060 Ti is a compact card that should fit well in any case and really leans into the minimalist look that has typified this generation of Nvidia graphics cards.

Like the RTX 3070, it features a modified version of the dual-axial cooler design found on the RTX 3080 and 3090. Instead of mounting fans on opposite sides, it places them on a single side in a much more traditional arrangement. The design is still all about quiet and efficient cooling, however, and its heatsink overlaps the PCB with ample room to exhaust heat from its rear vent. It works well, though not quite as well as the RTX 3080 and 3090, with a peak temperature of 75C and a slightly louder noise profile.

Like the rest of the external design, the output capability is also identical. Altogether, it’s able to support up to four displays, broken between three DisplayPort 1.4a outputs and a single HDMI 2.1. Total resolution tops out at 7680 x 4320, also known as 8K.

Under the hood, the RTX 3060 Ti carries on the 30-series’ track record of skyrocketing CUDA core counts. Compared to the RTX 2060 Super, the core count has more than doubled, going from 2176 to an impressive 4864 on the RTX 3060 Ti. As with all of this generation, however, this doesn’t mean that you can expect double the performance from last generation. Instead, a portion of these cores are able to flexibly swap processing tasks, so the amount of uplift will vary depending on how the game is programmed.

The clock speeds on the RTX 3060 Ti are close to last-gen, but there’s more here than meets the eye. Nvidia quotes a Boost Clock speed of 1665 MHz, only 15 MHz higher than the RTX 2060 Super. Thanks to GPU Boost, however, my sample clocked itself all the way up to 1875 MHz while gaming. Since GPU Boost bases its speed boost on thermal and power headroom, your mileage will naturally vary, but my results were found in a common PC gaming setup: a closed case with a mesh front panel and tempered glass side, several fans drawing cool air in and a rear exhaust, plus a top mounted all-in-one CPU cooler.

Nvidia also offers a new way to enhance performance further: Automatic Tuning. Like the OC Boost function in MSI Afterburner or EVGA’s Precision X1, GeForce Experience now offers the ability to intelligently scan the RTX 3060 Ti to apply a custom (and most importantly, stable) overclock. Coming from my review of the AMD RX 6000-series, I appreciate more than ever that this functionality is available in a mainstream card instead of a flagship-only feature. In my testing, the results were conservative but still offered several extra FPS, which enhanced the RTX 3060 Ti’s edge against the RTX 2080 Super.

Compared to the RTX 3070 and 3080, the memory configuration here feels surprisingly generous. Despite being the more affordable card, the RTX 3060 Ti features the exact same configuration as the RTX 3070: 8GB of GDDR6 on a 256-bit bus. This brings the total bandwidth up to 448 GB/s. While that arrangement felt like just enough on the RTX 3070, it feels like a much better fit here where gamers aren’t likely to be trying their hand at 4K gaming. AMD still has a major advantage with the 16GB of faster VRAM on its 6000-series, but this arrangement is perfectly sufficient, especially at its lower price point.

All of this amounts to some big performance leaps from the RTX 20-series. Looked at in TFLOPS, the numbers don’t lie:

Even though it’s tempting to extrapolate these improvements (especially against the Xbox Series X and PlayStation 5), they don’t compare well on multiple levels. Instead, using them as a metric of generation-over-generation improvement, we can see just how far Nvidia’s RTX architecture has evolved. The company has repeatedly stated that Ampere is its biggest generational improvement yet and the RTX 3060 Ti joins each 30-series card before it and bears that claim out.

The unique design of Nvidia’s RTX cards and the company’s massive investment in AI at large also offer it another game-changing performance advantage: DLSS. DLSS, or Deep Learning Super Sampling, is Nvidia’s AI-based upscaling technology that allows games to render at a lower resolution and output at a higher one, 1440p to 4K for example. Unlike other upscaling solutions, however, DLSS does away with the usual blur of stretched pixels and manages to deliver a picture that is actually better than native 4K thanks to the deep training of Nvidia’s in-house neural network.

Even though this technology is only available in a limited (but growing) number of games, it’s nothing short of a revolution for gaming performance. This is a feature so good, it should be in every game and there’s simply no reason not to use it whenever it’s available. It’s also the gateway to high performance ray traced gaming on a mainstream gaming GPU like this one. If DLSS is available, the RTX 3060 Ti will let you turn everything to ultra, including RTX, and game at 1440p. That’s incredibly impressive at this price.

The RTX 3060 Ti also supports a number of other key features for gamers. Competitive gamers will adore RTX Reflex, which instantly reduces input latency in such a way that even I can notice a difference as a casual shooter fan. It’s currently supported in major games like Fortnite and Call of Duty: Warzone with many others planned for the future. Likewise, RTX IO offers the promise for near instantaneous load times thanks to GPU-based decompression from the SSD. Unlike Reflex, Nvidia IO needs to be integrated by game developers, so support is still coming. With both current-gen consoles offering rapid load times, however, adoption seems like only a matter of time.

Content creators can also take advantage of their own suite of features. Nvidia Broadcast is squarely targeted at streamers. AI-powered features like virtual background removal (without a green screen) and AI-noise removal allow content creators ao achieve enhanced audio-visual production at the click of a button. RTX Studio, on the other hand, allows for innovative importing of assets from supported games for custom machinimas, as well as enhanced rendering for larger content creation tasks.

For receiving and enjoying content, the RTX 3060 Ti also supports AV1 decoding and HDMI 2.1 for up to 8K displays.

To assess graphics cards, I put each through a rigorous selection of synthetic tests and real world gaming benchmarks. It’s important to examine both to see how each GPU compares against the next in a theoretical “best case” scenario, as well as where it matters most: in games. Since both AMD and Nvidia offer hardware-level ray tracing, I run RT-capable cards through a selection of RT-specific tests.

Since the RTX 3060 Ti is positioned below the other RTX 30-series cards released so far, I limited 4K game testing and instead focused on a selection of 1440p and 1080p games. The 3060 Ti also has the distinction of being the first card this generation to really include 1080p as a performance target, I conducted additional 1080p testing with a wider selection of games. Due to publication time, I limited this expanded testing to just the RTX 3060 Ti and will add results from future cards also targeting this performance category.

Beginning with synthetic rasterization benchmarks, the RTX 3060 Ti performs remarkably well. In its marketing materials, Nvidia compared it most directly with the RTX 2080 Super and it’s easy to see why. In Unigine Heaven, it slid in just under the Super, but in 3DMark’s Fire Strike Ultra test, it outperformed even the RTX 2080 Ti.

Moving onto the ray tracing specific benchmarks, we see a split tale. In the Port Royal, 3DMark’s first ray tracing test, the card slots expectedly at the bottom of Nvidia’s product stack, but also underperforms AMD’s RX 6800. This shifts slightly in 3DMark’s non-animated ray tracing test, where the RTX 3060 Ti gains an edge over the RX 6800 and outperforms the RTX 2080 Super by 18%.

Things really differentiate once DLSS comes into play in Surgical Scalpel’s Boundary Benchmark. There, the RTX 3060 Ti nearly doubles even the RX 6800 XT and once more beats out the RTX 2080 Super.

Taking a closer look at 1440p performance, we can see consistently high frame rates of 60 or more with the exception of Dirt 5 which did not support DLSS. The RTX 3060 Ti averaged 30% faster than the RTX 2060 Super and 1% faster than the 2080 Super. Its performance was also remarkably close to the RTX 3070 across these games with a cumulative average of only 5% fewer FPS. Since most ray traced games I tested also allowed for DLSS, the 3060 Ti also improved upon the AMD RX 6800 by 29%. With those games removed, however, the RX 6800 pulled expectedly far ahead with a 42% advantage.

Finally, at 1080p the RTX 3060 Ti offers excellent frame rates nearly across the board. Compared to the RTX 2080 Super, frame rates were an average of 5% faster, only falling behind in Red Dead Redemption 2, Metro Exodus, at 1% and 3% fewer FPS, and Dirt 5 with 9% fewer FPS. Pitted against the RTX 2060 Super in this larger game selection, the average improvement remained the same at 26% faster overall. Note that two games did not support DLSS, Dirt 5 and Shadow of the Tomb Raider (DLSS is available from 1440p upward).