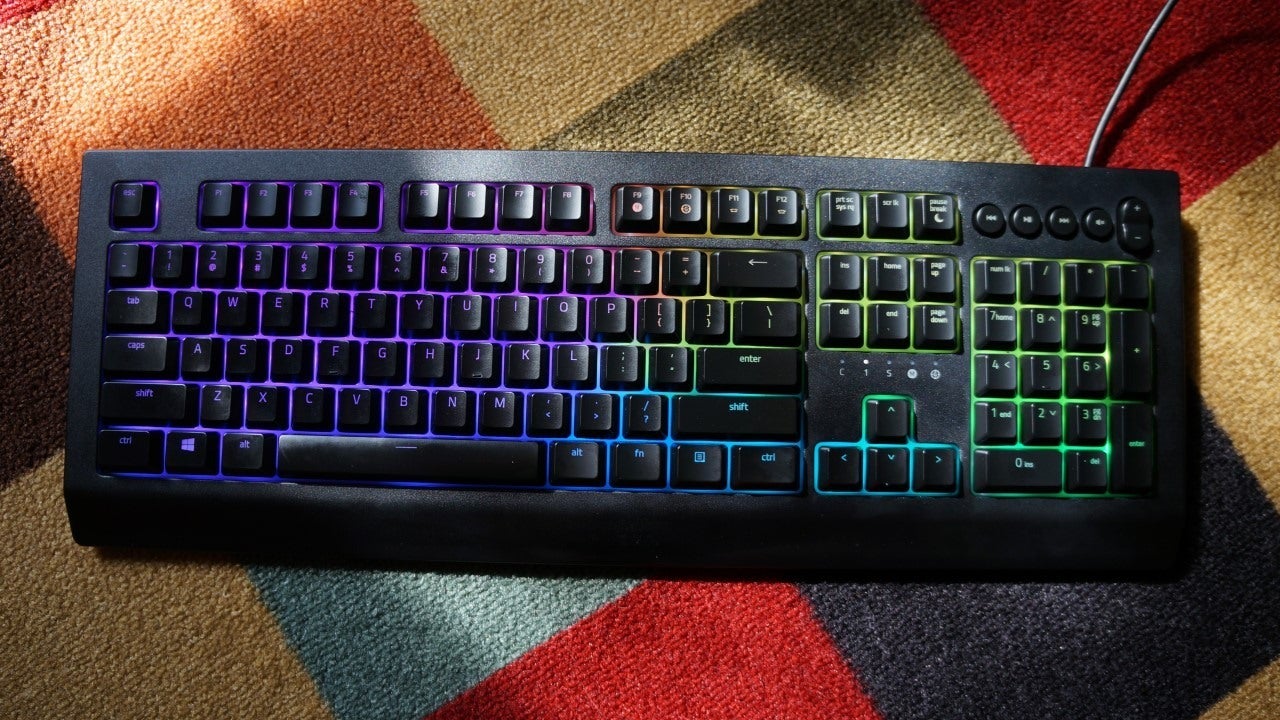 August 16, 2020 Off By tracy
Razer’s Cynosa Chroma gaming keyboard has an update with the Razer Cynosa V2. Though Razer has dropped the Chroma from the name, the Chroma RGB still shines bright. The Cynosa V2 still uses membrane key switches to offer an affordable price point as well. So, let’s see how this membrane gaming keyboard stacks up against its predecessor and the rest of the competition at its $60 price point.

As mentioned, the Razer Cynosa V2 uses a membrane key switch, which gives it a softer key feel and quieter keystroke than typical high-end mechanical gaming keyboards. For most of the keys, this isn’t too big an issue. I’ve actually found plenty of membrane keyboards every bit as capable as their mechanical counterparts, though the 50 million keystroke promises of many mechanical keyboards isn’t made by Razer for the Cynosa V2.

Even if it’s not mechanical, the Cynosa V2 still has two specs that are essential for gamers: a 1,000Hz polling rate for instantaneous responsiveness and N-key rollover to ensure every keystroke is registered. Anti-ghosting is missing, but this shouldn’t be as much of an issue thanks to the presence of the N-key rollover.

The Cynosa V2 is about as well-lit as a gaming keyboard comes. I’ve found membrane switches help diffuse the light coming from beneath keycaps better than on many mechanical key switches, and sure enough the lighting here does a great job of fully illuminating the legends on each key, making it easy to see secondary functions on all of the keys in the dark. The RGB lighting here is fully customizable on a per-key level, and has many game integrations to let Razer’s software automatically change the lighting to match a game’s controls.

Razer has a few extra perks in the Cynosa V2. One is water resistance, which I’ve seen on the likes of the Corsair K68 RGB. However, just like Corsair’s keyboard, I don’t see too many ways for water to easily drain from the keyboard once spilled in. Beyond that, Razer has included three-way cable routing and adjustable legs that can raise the keyboard up to two different heights, which together make it easier to set the keyboard up however desired. There are also now dedicated media controls where the original Cynosa Chroma only had status lights.

At $60, the build and features are definitely compelling. The frame is solidly plastic, but it feels plenty sturdy. Some of the keys give off the occasional squeak, though this tended only to come from some of the larger keys (ones with a metal for balance) and depended on where on the key I pressed.

The Cynosa V2 relies on Razer’s Synapse 3 software for customization, which is both a blessing and a curse. The software is easy to use in general, but Razer has compartmentalized its various features, so it requires different modules in order to access different functions, such as advanced RGB lighting customization. It’s not a deal-breaker, but it can feel excessive if this is your only Razer peripheral.

The Razer Cynosa V2 is up to snuff when it comes to gaming. Haters will hate on membrane key switches, but I find they actuate just fine, and I don’t notice any delay while twitching my way through Overwatch’s Total Mayhem game mode at 144fps.

I’ve found Razer’s design actually has an advantage over Cherry MX-style key switches: wobble. Rather, it’s the lack of wobble. Razer’s keys slot into a square sleeve that lets them travel up and down with almost no play. With my fingers resting on top of the keys, they don’t wiggle around and tilt like the keys on many mechanical keyboards. This design is somewhat akin to what I’ve seen in some of Logitech’s higher-end keyboards with Romer-G switches.

That lack of wobble is no small convenience, as it makes it so much easier to type and stay home on the WASD keys while gaming. I never reached over to press one button in a game only to slip off the edge and press the wrong one because my desired key had tilted.

But, I did say earlier that the membrane switches weren’t a problem for “most of the keys.” While sitting cozy on WASD, the performance of this keyboard is exceptional for a $60 accessory. But, when typing and using the full keyboard, its faults show. The backspace key is squeaky (as mentioned earlier), and some of the larger keys don’t travel well. I noticed this most on the right shift key (which is the widest key after the space bar). Typing, I’d often hit the very left edge of the right shift key, and it would fight my pinky to stay up. With so much resistance to sliding down, I often would miss my capitalization and then have to hammer away at the squeaky backspace key.

This fault when pressing the extreme edge of a key is something I’d previously noticed in the buttons on a Razer fightstick. But, it’s a bit more excusable here. If you don’t do a ton of typing (or if you mostly rely on the left shift key – to each their own) you can overlook this issue, since it never came up on any of the keys near WASD. But, if you do type a lot, there are few things more enraging than a keyboard that incites typos.

At $60, this is a really strong offering. It doesn’t exist in a vacuum though. The Corsair K55 costs about as much but includes macro keys and a wrist rest. Meanwhile IOGear’s $70 HVER Pro RGB ditches per-key RGB lighting in favor of a metal build and mechanical key switches, and Cooler Master’s CK530 offers a metal frame, per-key RGB, and mechanical switches all for $70. None stand out as vastly superior based on my experience, but they may be better options depending on your priorities.

The Razer Cynosa V2 is available from Amazon for $60