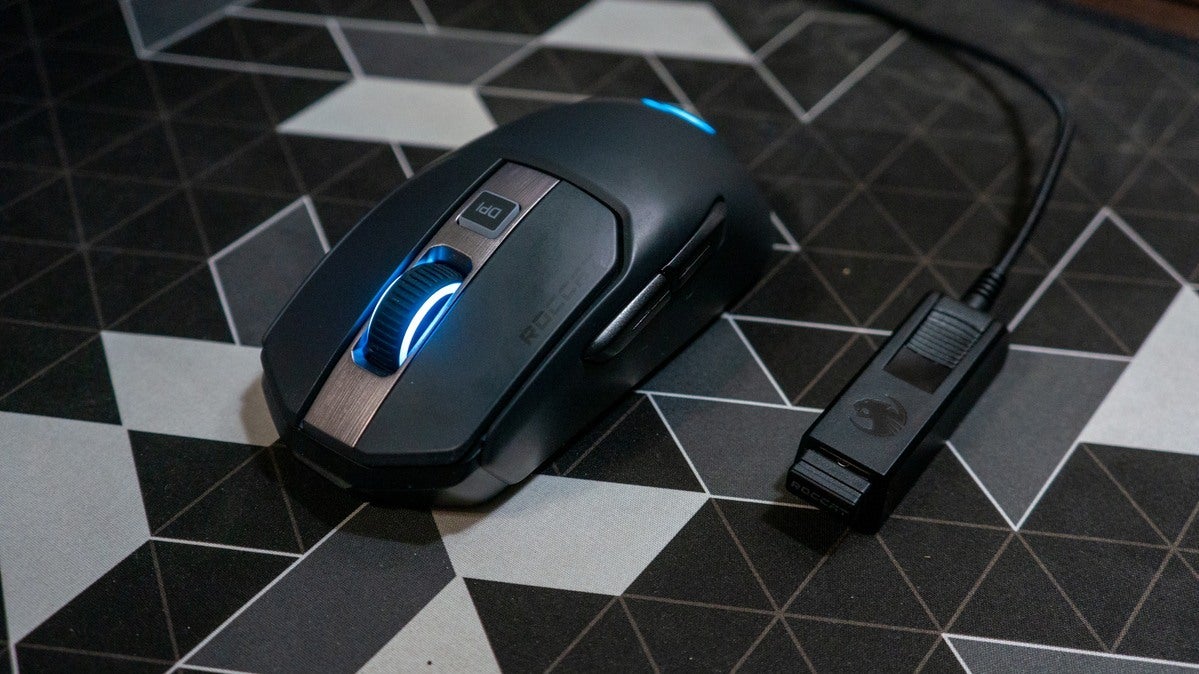 April 8, 2020 Off By tracy
The Roccait Kain 200 AIMO looks much like its siblings in the Kain family of mice, but Roccat has gone wireless for this model, making for its only new wireless gaming mouse in the latest batch of products. At $99, it costs a considerable amount for a gaming mouse, but actually manages to stay below the asking price for many of the best wireless gaming mice, like the Logitech G502 Lightspeed or Razer Basilisk Ultimate, both of which cost more than 50% more. Let’s see how it stands up against its pricier rivals.

The Roccat Kain 200 AIMO has many of the features demanded of a premium wireless gaming mouse. It connects using a diminutive 2.4GHz wireless dongle for lag-free gaming. The Owl-Eye optical sensor offers a max sensitivity of 16,000 DPI, which is more than enough in our book. It also has exceptional tolerances for accelerations up to 40G and speeds up to 400 IPS (inches per second). I don’t think I’ve ever had to move my hand that fast to land a flick shot. The sensor also has lift-off detection, allowing a “low” and “very low” option.

The sensor was designed by Roccat with PixArt to use minimal power. This has allowed the Kain 200 to boast 50 hours of play time on a single charge of its 1,000mAh battery, or 35 hours if the RGB lighting is enabled. In my testing, the battery seemed to live up to those claims with the lights on. I tracked hours on the last 40% of battery life, and got 12 hours of play time. Since the Roccat Swarm software annoyingly only shows the battery charge in increments of 20%, it’s likely that test began when the charge was actually below 40%.

Omron switches feel as good as ever in the Kain 200. The main mouse buttons have a consistent click. The thumb buttons strike a good balance between easy to press and too easy to press, while their placement also makes them easily accessible. The middle mouse button is considerably stiffer than the others, making it tougher to press in a split second.

The build of the mouse is robust and simple. Beyond the customizable, two-zone RGB lighting, a metallic strip between the mouse buttons is the most embellishment it gets. No striking angles or gaudy grip material here.

The Kain 200 isn’t massive at 4.88” x 2.56” x 1.69”, but the smooth arch feels comfortable for a claw or palm grip. The width is mostly consistent with very little taper at either end, making it a cozy fit for big hands. The material used for most of the mouse is also subtly grippy, offering a good hold. And at 105 grams, it’s almost as heavy as the Razer Basilisk Ultimate – making it feel quite substantial.

The wireless dongle has a base station it can plug into to get better reception. The base station connects with a micro USB cable that also doubles as the charging cable for the mouse. The cable is cleverly built, slotting securely into the mouse and allowing it to switch to wired mode without feeling like a flimsy connection. It feels just like a normal wired mouse would. This is much like the cabling used for the Razer X Basilisk Ultimate and the SteelSeries Rival 650.

The Kain 200 uses Roccat’s Swarm software. Through Swarm, a lot can be customized, from button reassignment and illumination to various battery saving settings. You can set five DPI settings per profile, from 100 to 1,600DPI with 50 DPI increments. And there’s room on the mouse for 5 profiles in its 512kB of onboard storage. Swarm also has a detailed Macro editor, complete with simple, pre-made macros for various popular games from Apex Legends to Counter Strike 1.6 and software like Photoshop and Office.

Thanks to the fit and finish, I found gaming on the Kain 200 a great experience. The comfortable fit made it easy to confidently move around, and all of the buttons are dependable. While it has one fewer thumb button than the Rival 650, I found the buttons it does have to be more appealing and easier to use. Having said that, the middle mouse button was a bit hard to press, but it makes up for that firmness by not scrolling when I’d only meant for a middle click.

I played a few rounds of Overwatch with the Kain 200 to see if it could hold up in the sorts of flick shooting situations found there. Sure enough, I was able to quickly flick between opponents and fire off mostly accurate shots. The thumb buttons were also reliable for triggering abilities in the game.

Most of the time, I used the Kain 200 in Rainbow Six Siege. I spent over 20 hours between ranked, unranked, and a special event, and all through it the mouse kept up.

In my matches, I was able to line up my angles comfortably, manage my recoil, and snap to targets that showed up in unexpected places. In one round, I was holding an angle on a door when I spotted an enemy far to my right through a hole blown in the wall. I was able to whip around, get them in my sights, and kill them in a split second. That was just one of the occasions where the accuracy and reliable tracking of the Roccat Kain 200 AIMO showed it was up to snuff.

Having just switched from Razer Basilisk X Ultimate and having used the Rival 650 for a long time prior, I can confidently say the Roccat Kain 200 AIMO performs just as well as either of those more expensive wireless gaming mice. But, it may have some competition in the lower end of the market from the Corsair Harpoon RGB Wireless, which is similarly featured, costs about half as much, and adds in Bluetooth support to up the ante on versatility.

The Roccat Kain 200 AIMO is available on Amazon and Best Buy with an MSRP of $99.