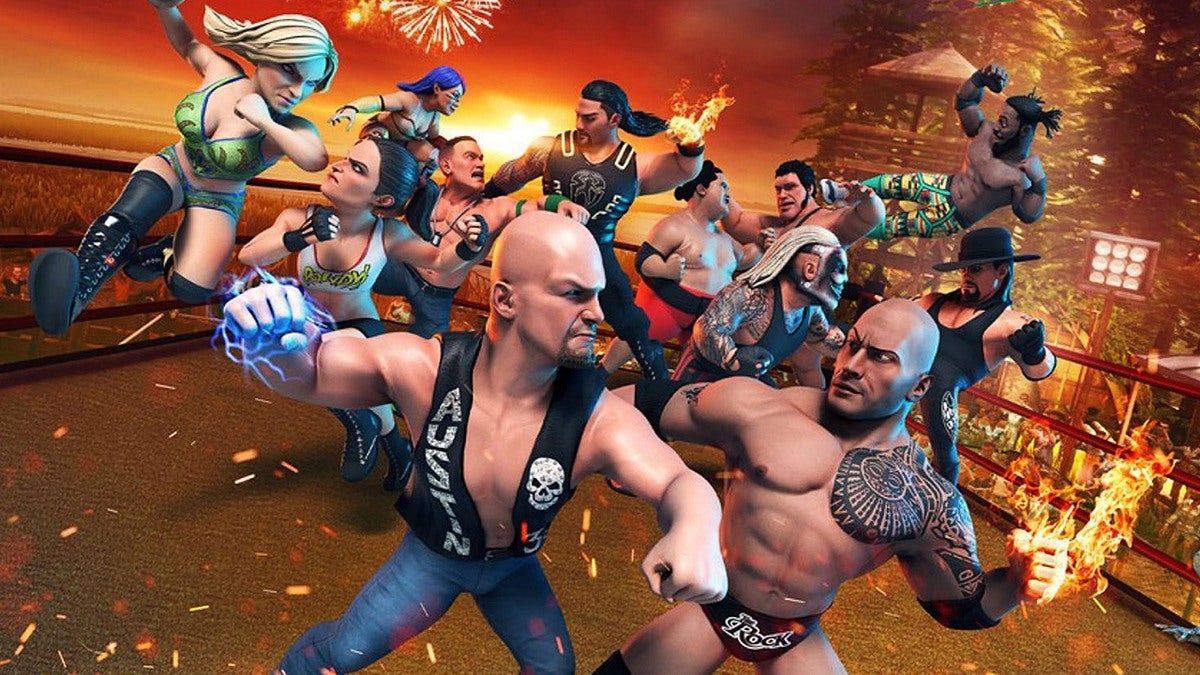 It’s been a rough couple of years for the WWE 2K series, with the switch port of WWE 2K18 being a nearly unplayable mess and the buggy disaster (on all platforms) that was WWE 2K20, which has led to the mainline series taking a much needed year off. In its place is WWE 2K Battlegrounds, a cartoony and arcadey take on professional wrestling where wrestlers can jump 50 feet in the air, swing opponents like rag dolls, toss them into the waiting jaws of alligators, and so on. On paper, that sounds like an exciting departure from the simulation-focused main series in favor of something more akin to 2011’s underappreciated WWE All Stars… but there’s virtually nothing beyond the flashy animations. It may be easy to pick up and play, but it lacks any sort of depth to either its combat or its roster of 70 wrestlers, a large majority of which are locked behind a microtransaction-infested barrier.

Every IGN WWE Game Review Ever

The one thing that WWE Battlegrounds has going for it is that unlike many other wrestling games, it’s immediately intuitive. You don’t have to worry about chain wrestling, timing-based pin minigames, cat-and-mouse submission minigames, how to set up and climb ladders in ladder matches, how to place your opponent on a table in a table match, etc. To tell someone how to play, all you need to do is show them a controller and say “Here’s your punch button, here’s your kick button, this is how you throw, this is how you block, remember to press the button on screen when you get grabbed to do a reversal, and if someone tries to pin or submit you, just mash these buttons.” Done.

The movelist for every character is extraordinarily short.

This puts Battlegrounds in a unique position of being by far the most approachable wrestling game for complete newcomers in years, but it also comes with a pretty substantial sacrifice. Namely, any semblance of depth or complexity to its combat.

The movelist for every character is extraordinarily thin for a wrestling game, even an arcadey one, with each wrestler only having a small handful of basic combos and throws. Worse still, these moves are copied and pasted onto virtually every wrestler that falls within the same class of either Powerhouse, Brawler, All-Rounder, Technician, or High-Flyer. So Shinsuke Nakamura has almost the exact same moves as the Miz, Charlotte Flair has almost the exact same moveset as Stephanie McMahon, and Triple H has almost the exact same moves as Andre the Giant. There are some slight differences, with a few select characters having one or two moves that are unique to only them, and every character has their own signature and finishing move. But aside from that, these characters play exactly the same.

There are, at the very least, a few meaningful differences between each of the five classes. Powerhouses are slow, but have attacks that can power through their opponent’s strikes; Brawlers can create weapons like steel chairs and motorcycles out of thin air and have extra power on their strikes; Technicians have extremely powerful throws and can even cause limb damage, which will cause opponents to stagger around briefly; High-Flyers can jump off the ropes, use running throws, and get to the top rope faster than other classes; and All-Arounders can do a little bit of everything. It’s similar to what WWE All Stars did with its class system, but here it’s less about defining a style of play and more about defining what specific cool things you can and can’t do.

That said, my biggest gripe with the gameplay of Battlegrounds, aside from the poor hit detection, is the reversal system. It simply gives you way too much time to reverse throws and attempts to balance that by having throws cost a portion of your Heat meter, which is what’s used to execute your signature and finishing moves. As a result, many of my most competitive online matches of Battlegrounds were also among the most miserable: we just took turns reversing everything, with neither of us making much progress toward ending the match.

Measured by any standard other than as a brief party game, it falls flat on its face.

One final notable wrinkle on the arcadey nature of Battlegrounds’ combat is the powerups, of which you can select three before each match. These are temporary buffs that can either increase the damage of your strikes, give you some health regeneration, or make all of your attacks unblockable. Some are extremely powerful, with my favorite being a buff that adds another layer to the pin minigame, forcing your opponents to mash even faster if they want to break a pin. Of all of the mechanics Battlegrounds brings to the table, powerups are by far the best, and the one that fits best with its overall theme. What it all boils down to is that Battlegrounds’ combat is totally passable as a quick party game that you play for an hour or two and then move on to something else, but measured by any other sort of standard, it falls flat on its face.

To tie those matches together, Battlegrounds has an equally shallow campaign mode. The premise of the story is that Paul Heyman decides to create his own new brand of pro wrestling that has him traveling around the world, recruiting wrestlers, and having them fight in a ring on their own home turf. Thus the Battlegrounds brand is born.

It doesn’t take itself seriously and is fully aware of how cheesy and silly it all is, but that doesn’t excuse the fact that it is incredibly cheesy and silly. The art style also lacks any flair or charm, and the characters you control are all as one dimensional as you’d expect, given the fact that they are only given two comic book pages worth of story at the beginning of each chapter to establish who they are and why you should care about them.

The gameplay of the campaign doesn’t do much to pick up the slack dropped by the story either. It’s just a long string of matches against various superstars, with occasional rewards such as new battlegrounds, new power ups, and – most substantially – new characters. Eventually, after hours of the same match types and having to use the same boring characters, I started to lose interest and just worked to mainline it towards the end, which took about eight or so hours to get through.

Things don’t get much better in the other modes, either. Battleground Challenge is basically the campaign mode minus the story, and plus your own created character that you improve via a microtransaction-riddled progression system. King of the Battlegrounds is conceptually a neat idea that challenges you to stay alive as long as you can in a battle royale, with new players being teleported in as others get eliminated, but the problem is that there’s currently an easily exploitable bug that lets you eliminate players without ever having to even go through the elimination minigame by pushing them through the ropes.

The Top 10 Wrestling Video Games of All Time

Then there’s the usual assortment of match types like steel cage matches, triple threats, fatal fourways, and the like. The problem with all of these is that the gameplay of Battlegrounds is tuned in such a way that characters get up super quickly after getting knocked down; this makes match types like traditional tag matches, Triple Threats, and Fatal Fourways, where the first player to get a pin wins a nightmare because it’s so dang hard to keep everyone down long enough for you to secure a three-count. The mainline WWE 2K series addressed this years ago by forcing you out of the ring and making you take a quick rest if you take too much damage, but Battlegrounds has no such mechanic.

It’s just one flub after another.

And finally, as much as I love Mauro Ranallo and Jerry Lawler, their commentary is brutal to listen to. Not because of their performances – they actually do a great job in bringing their on-camera energy to the voice over – but because their calls are so frequently off the mark. Whether it’s calling out the wrong moves, constantly reacting to something super late, repeating dialogue, or overreacting to a normal move, it’s just one flub after another.

Microtransactions pervade just about every corner of Battlegrounds, from its roster of characters, to cosmetics, and to character creation.

Each character also features a collection of skins that each cost about half of what the actual character costs, and there are also a ton of different vanity items you can purchase for your created characters for anywhere from 4,000 to 12,000 Battle Bucks (or 125 to 300 Golden Bucks).

This is pretty terrible on all fronts. The starting roster is super thin and is missing some of the biggest stars currently in wrestling, like Seth Rollins, AJ Styles, Becky Lynch, Sasha Banks, Bayley, Asuka, Drew McIntyre, Kevin Owens, and many more, and hiding them behind a microtransaction wall feels gross. The character creation options are also extremely limited and boring when compared to the stuff you can pay for. While there are daily challenges and online tournaments that can reward you with lots of battle bucks, working to afford the most expensive characters in the store is an extremely grindy exercise and not one that I have any interest in participating in.